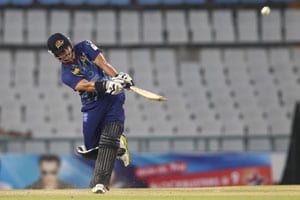 Otago Volts were willing to take a punt on Ryan ten Doeschate's availability for the qualifying phase of the Champions League. It was a gamble well worth it as the Netherlands allrounder sparkled with ball and bat against Kandurata Warriors at the PCA Stadium in Mohali on Wednesday (September 18), all but securing Otago's place in the main draw of the competition with a comfortable six-wicket victory. (Scorecard | Commentary)

Overwhelmed by Sunrisers Hyderabad the previous day, Kandurata desperately needed to win to stay in the hunt. A hesitant start upon being put in by Brendon McCullum was just giving way to the potential of a healthy total with Upul Tharanga in full cry when ten Doeschate - released only on Tuesday by English county side Essex - arrived at the bowling crease with his excellent change of pace. (Highlights)

In two brilliant overs midway through the innings, ten Doeschate accounted for Dilhara Lokuhettige and Lahiru Thirimanne, finishing with exceptional figures of 2 for 9 from two overs. Ian Butler then struck thrice in his last over as Kandurata's designs of a total in excess of 170 lay in tatters. The Sri Lankan champions had to settle for 154 for 9. (Match in pics)

It was a score that shouldn't necessarily have challenged the formidable Otago batting, but Kandurata's attack, based on spin and taking pace off the ball, posed uncomfortable questions for the first half of the chase. Ajantha Mendis was a handful without having anything to show for it, Lokuhettige was outstanding with his slower ones, and with Brendon McCullum falling early and the rest looking a little out of sorts, it appeared as if Otago were in for a scrap.

Enter ten Doeschate, to link up with Neil Broom in a third-wicket stand of 44 that calmed the nerves. While Broom alternated between hitting sixes and dead-batting defensively, ten Doeschate effortlessly transferred the pressure on to Kandurata. The counter-attack began with three sixes off as many deliveries from Kaushal Lokuarachchi, with the leg-spinner deposited in the arc between straight and wide mid-on. Not even Broom's dismissal to a Lokuhettige special stemmed the flow of runs.

Ten Doeschate was brutal when he struck down the ground, but also cheeky with his paddles and sensational in running between the wickets alongside James Neesham, who did his bit with a couple of beefy strokes. From the hunter, Kandurata suddenly became the hunted. Ten Doeschate, who smashed 64 off just 32 deliveries with two fours and five sixes, and Neesham put on 57 in just 30 deliveries to all but usher the Sri Lankans out of the tournament.

Wonderful new-ball bowling by Butler and James McMillan had kept Kandurata well in check in the afternoon. The ball jagged around a fair bit, but Kandurata took their time shedding the shackles. The first boundary didn't come until the fourth over, and only 25 had been scored in the six Power Play overs when Nathan McCullum was summoned to the bowling crease.

Tharanga feasted on the offspinner, smashing two towering sixes in McCullum's first over to signal a shift in momentum. On 13 off 20 balls when he hit his first six, Tharanga didn't look back, even if he ploughed a lone furrow as no other batsman passed 15.

Kumar Sangakkara's scratchy presence was also brief, and not long after that, Tharanga was put down by Derek de Boorder, the wicketkeeper, off McCullum. Then on 29, Tharanga smashed the very next ball out of the park before clubbing McCullum for another four in the same over to rub salt into gaping wounds. That was just about the only time when the bat called the shots. Promoted for the second time in as many days, Lokuhettige was the passive partner in a third-wicket stand of 47 off just 25 deliveries, an association that powered the total to 99 in the 13th over and raised hopes of a big final tally.

However, ten Doeschate threw a spanner in the works. Taking the pace off the ball and forcing the batsmen to take chances, he accounted for Lokuhettige and Thirimanne in successive overs to provide a twist in the tale. Tharanga held his end up until being well caught in the covers by Brendon McCullum, the first of three wickets in four deliveries for Butler.

Comments
Topics mentioned in this article
Cricket Parthiv Patel Champions League Twenty20 2013 Shikhar Dhawan Kumar Sangakkara Lahiru Thirimanne Jesse Ryder Brendon McCullum Ryan ten Doeschate
Get the latest updates on SA vs IND 2021-22, check out the Schedule and Live Score . Like us on Facebook or follow us on Twitter for more sports updates. You can also download the NDTV Cricket app for Android or iOS.