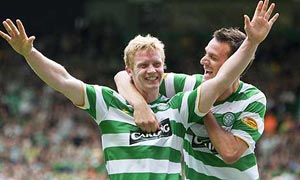 After the 1-1 draw at the Stadio Friuli, the Glasgow club were charged with, "the displaying of a banner of an offensive nature and the setting off of fireworks by supporters".

Some Celtic fans displayed a two-part banner which insulted UEFA, days after the club were fined about £12,700 for "illicit chanting" involving pro-IRA (Irish Republican Army) songs at a Europa League game against Rennes at Parkhead.

Several flares were also let off and one thrown on to the track by pitchside.

Celtic manager Neil Lennon and chief executive Peter Lawwell slammed the "rogue" element within their support the day after the game.

Lawwell said: "It is very frustrating. Those people are not Celtic supporters. We will weed them out and these guys will not get back into Celtic Football Club.

"One or two silly little juvenile boys doing funny kids' pranks and stuff is bringing the whole of Scottish football down."

Lennon added: "My only surprise is that they got the spelling (on the banner) right.

Comments
Topics mentioned in this article
Champions League Twenty20 2013 Football Udinese Scotland Celtic
Get the latest Cricket news, check out the India cricket schedule, Cricket live score . Like us on Facebook or follow us on Twitter for more sports updates. You can also download the NDTV Cricket app for Android or iOS.