Celtic back on track after downing Dundee

Reigning Scottish Premier League champions Celtic returned to winning ways with a 2-0 victory at home to bottom of the table Dundee on Saturday. 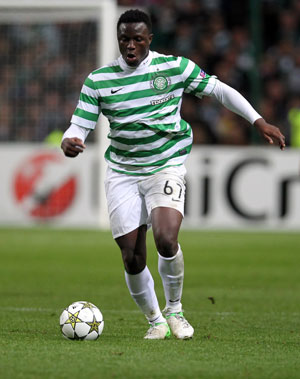 Reigning Scottish Premier League champions Celtic returned to winning ways with a 2-0 victory at home to bottom of the table Dundee on Saturday.

Beaten by St Johnstone in a shock upset last weekend, and held to a goalless draw by Benfica upon their return to the Champions League in midweek, Celtic moved to within a point of leaders Motherwell thanks to goals from Gary Hooper and Victor Wanyama.

Hooper put Celtic ahead shortly before half-time and four minutes into the second half Wanyama's long range shot doubled Celtic's lead to the delight of the Parkhead faithful.

"It is a concern for me," said Celtic manager Neil Lennon of his side's wayward shooting.

"What isn't a concern is the chances that we are creating, because we are doing that on numerous occasions in games -- but I would like to see us start putting a few more away.

"It was a good performance, a clean sheet and three points which is what I wanted. We had to wait a wee while for the breakthrough but it was a quality goal from Gary.

"We got a great second goal in the second-half and I felt after that it was one-way traffic and the only disappointment was we didn't get more goals."

"I will have him by the neck later on for making my day uncomfortable.

"I thought he was excellent. It took two quality goals to beat him today.

Dundee manager Barry Smith added: "Rab has done extremely well for us all season. He gets a lot of plaudits and maybe a lot of people give him some stick but at 40 years of age, producing performances week in, week out is difficult.

"For him to continue to do that is great for Dundee Football Club."

With Motherwell not playing Aberdeen until Sunday, Hibernian missed the chance to go top after surrendering a two-goal lead in a 2-2 draw with Inverness Caledonian Thistle.

Goals from Eoin Doyle and David Wotherspoon put Hibs on top before Conor Pepper pulled one back for Caley ahead of Richie Foran's late equaliser.

Meanwhile, promoted Ross County's 40-match unbeaten run was brought to an end by St Johnstone, who won 2-1 at Victoria Park despite being reduced to 10 men.

Liam Craig gave Saints the lead before the Perth side saw Rowan Vine sent off for an off the ball incident with Richard Brittain.

Teenager Callum Paterson scored his first senior goals as Hearts beat Dundee United 3-0 at Tannadice for their first win since the opening day of the season.

The 17-year-old, who had been converted into a striker by Hearts manager John McGlynn, gave the Jambos a 28th-minute lead with a 20-yard strike and sealed victory when he he seized on a loose back pass by Sean Dillon.

In between those goals, Arvydas Novikovas made it 2-0 with a swerving shot as Hearts bounced back from successive defeats by Dundee and St Mirren.

Cillian Sheridan scored his first goal for Killie to make it 1-0 when he glanced home Danny Racchi's centre and James Fowler doubled the hosts' lead 12 minutes into the second half.

James Dayton's solo effort on the hour made it 3-0 and a deflected consolation goal from Paul McGowan came too late to spark a St Mirren revival.

Comments
Topics mentioned in this article
Football Champions League Twenty20 2013 Gary Hooper
Get the latest updates on ICC T20 Worldcup 2022, check out the Schedule and Live Score. Like us on Facebook or follow us on Twitter for more sports updates. You can also download the NDTV Cricket app for Android or iOS.