India recorded their best-ever finish at the World Boxing Championships by claiming a silver and a bronze through Amit Panghal (52kg) and Manish Kaushik (63kg). 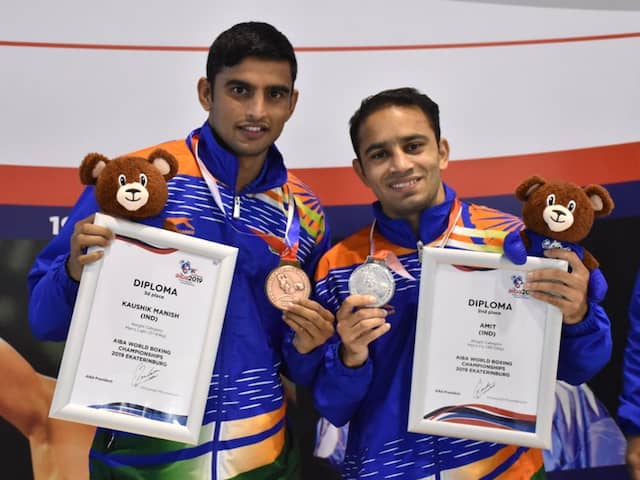 Indian boxers' unparalleled performance at the just-concluded men's World Boxing Championships shows they are "closing in" on traditional powerhouses such as Kazakhstan and Uzbekistan, High-Performance Director Santiago Nieva has asserted. India recorded their best-ever finish at the marquee tournament in Ekaterinburg, Russia by claiming a silver and a bronze through Amit Panghal (52kg) and Manish Kaushik (63kg), respectively. Before this, the country had never won more than a bronze in a single edition of the showpiece event. "We have done what we came for. We won medals, performed better than last time. The targets were achieved," Nieva told news agency PTI in a telephonic interview from Ekaterinburg.

"Countries like China and Azerbaijan, which are good, are going back without a medal while we have improved our tally, it has significance. We can be proud," he said.

"I was expecting a determined show but to tell you frankly, I am surprised at the intensity. Our expectations have not just been met but surpassed," added national coach C A Kuttappa.

India was among nine countries, out of a total of 78, which had a finalist in the tournament. The country was tied with England and the United States in having one finalist in the mega event, the Kazakhs and the Cubans had two, while the Uzbeks topped with four in the summit clashes.

India had four boxers in the quarterfinals, two of them losing intense contests.

"We still have a lot of work to do but we are closing in. We believe we can be at par with the likes of Kazakhstan and Uzbekistan. We are heading in the right direction," Nieva said.

"I am confident that when the World Championships comes to Delhi in 2021, we will have more medals than ever," he added.

"Amit is a very busy boxer and he always gives the impression that he is up to something. He improvises quickly and can really surprise opponents. Manish is dogged. He sticks to counter-offence and forces his rivals to adapt," he explained.

"Amit always fights bigger and stronger boxers but never seems fazed. They find it hard to figure him out. He is very deceptive," Nieva added.

Asked what exactly has worked so well this time for the Indians, Nieva said, "clean punching".

"No matter what you are trying to execute, whether straights, uppercuts or hooks, make sure they are clean hits. The boys are responding well to this," he added.

The Argentina-born Swede, who has been with the team since 2017, also praised debutant Sanjeet (91kg) and Asian silver medallist Kavinder Singh Bisht (57kg).

The two finished as quarterfinalists after producing some gutsy performances. Bisht, in fact, fought with a cut above his right eye in the quarterfinals but did not look perturbed against Commonwealth Games gold medallist Peter McGrail of England.

"They showed big hearts. They were unfazed by the stature of their rivals and that's what is very important. You respect your rival but don't get intimidated by his CV," Nieva said.

"Indian boxers are fearless in that sense. We are also working on ensuring control. It is important to be fearless but it is equally important to take a step back when the situation demands. These are aspects that we are building on to strike the right balance," he added.