India's 2-0 loss in the three-ODI series against Bangladesh has raised the question about whether the side urgently needs a head coach. MS Dhoni though insists that there are currently enough people in the support staff to help out. 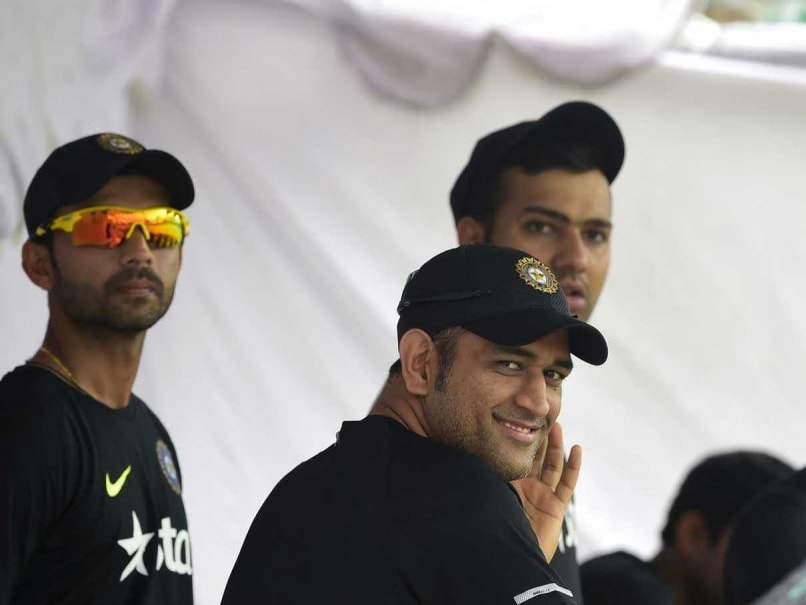 The Indian team currently has a team director, a batting, bowling and fielding coach.© AFP
Dhaka:

Insisting that there are enough people in the support staff to take care of players, India captain Mahendra Singh Dhoni has said it is fine if the coach's position remains vacant for some time rather than appointing "anybody" to fill in. ('Fearless' Bangladesh celebrate rare consistent run)

The coach's position has been a hot topic of discussion post Duncan Fletcher's exit after the World Cup and Dhoni insisted that the Zimbabwean's contribution was invaluable to Indian cricket.

"At least indirectly you are saying you are missing Duncan Fletcher," Dhoni shot back when asked about the team's losses in relation to the coach's job lying vacant in the post-match conference after the Men in Blue suffered the ignominy of their maiden series defeat against Bangladesh.

"If you are indirectly hinting that we need a coach and all that, we have enough people in the support staff to take care of us. And even if the position of the coach is vacant for some time, it is okay. Don't put just anybody there just because the post is vacant. Then it will have a bad impact in the long run. It takes time to make these decisions, and our team generally doesn't have that time because we keep playing non-stop," he added.

India were outplayed in virtually every department in the first two ODIs against Bangladesh, but Dhoni defended the squad members.

"This is the best lot of players we have," Dhoni said.

"What we have to think about is, if we are playing in the subcontinent whether we want to go in with the extra spinner, whether we really want fast bowlers who bowl quick but are not good with line and length. At times we have seen they can really go for runs.

"If you see Bhuvi (Bhuvneshwar Kumar), he is not exceptionally quick but even when the batsmen are scoring fast he gets away with it. The only problem is, if he doesn't take wickets the other bowlers are not smart enough to get away with the kind of bowling they do. Overall you have to see what is the best balance and accordingly you move forward," he added.

Dhoni, who made a valiant 47 in India's six-wicket loss on Sunday, promoted himself to number four in the batting order but failed to accelerate when wickets fell in a heap at the end of the innings. The wicketkeeper-batsman though hinted that the move can be a long-term one.

"The whole idea was for me to go up and play more freely. The last four-five years, I have batted at 6, and there is always some kind of pressure other so I have not been able to bat freely. I wanted to get set and bat freely, but when I got set we lost wickets. Then we had to build some kind of partnership before we could go after the bowlers, then again we lost a couple of wickets. It was not really possible," he said.

"I would like to bat slightly up in the order so I can play a bit more freely. Yes I have adapted to what the team needed of me since 2006, but for the longer run it is important for us to see who is a good batter at No. 6, at 7 or even maybe 5. That is why I dropped (Suresh) Raina (down the order). He has been successful at that slot," he added.

Often accused of persisting with allrounder Ravindra Jadeja, who scored 19 at No.7 and failed to bag a wicket in his 7 overs, Dhoni not only defended his Chennai Super Kings teammate but also gave a cricketing justification for his preferred selection.

"We use every bowler according to his potential. I don't like to bowl him in the first 10, but after that he has bowled for us consistently, in the second powerplay and even in the slog. I have used him late in the innings, and he has bowled three decent overs in the powerplay.

"I feel it is very difficult for someone like him to justify his selection because more often than not they don't get to bat. In the last one year even I have not got a decent chance to bat. The only decent chance you get is when you are four-five down in 20 overs," he said.

"To always come in an international game and expect an individual to score a fifty is not really possible, so it is a difficult one. Also, our top order has done really well so we haven't tested the bottom order.

You can say these two matches our lower order was tested so it is difficult for him to justify his batting. From bowling point of view, in between he was up and down, but later on, during the World Cup he bowled well and after that here he is bowling well," he added.

Comments
Topics mentioned in this article
India Cricket Team Bangladesh Cricket Team Ind vs Ban, 2015 MS Dhoni Ravi Shastri Duncan Andrew Gwynne Fletcher Cricket
Get the latest updates on ICC Women's Cricket World Cup 2022 and IPL 2022, check out the Schedule , Live Score and IPL Points Table. Like us on Facebook or follow us on Twitter for more sports updates. You can also download the NDTV Cricket app for Android or iOS.