MS Dhoni Batting up the Order is a Confidence Booster for me: Shikhar Dhawan

MS Dhoni promoted himself up the order in the ODI series against Bangladesh and Shikhar Dhawan said he enjoyed batting with the skipper. 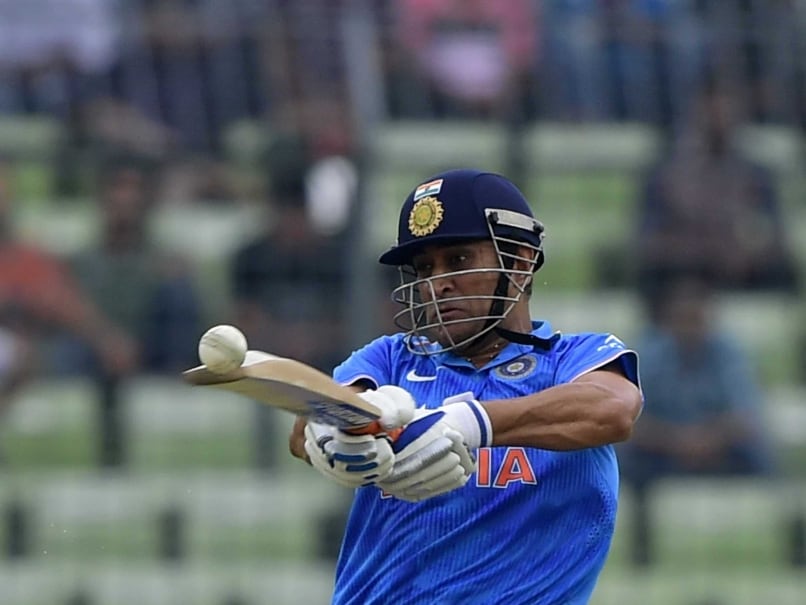 MS Dhoni plays a shot during the 3rd ODI vs Bangladesh..© AFP
Mirpur:

Indian opener Shikhar Dhawan has said that skipper Mahendra Singh Dhoni's elevation up the order is not only an advantage to the line-up but personally gives him confidence while batting.(Is it Dhoni vs Kohli?)

The Bangladesh series saw the limited-overs skipper promote himself to the number-four position in the batting chart and Dhawan, who was the leading run-scorer after accumulating 158 runs, said he enjoyed batting with Dhoni even though India lost the series 1-2.(Dhoni and the Number 4 Conundrum)

"It gives me a lot of confidence to see him walk into the middle while I am at the crease. We also enjoy each other's company and so it's fun batting with him. The way he adapts to various situations makes my life easier," Dhawan told bcci.tv after the team's consolation win in the final ODI last night.(Kohli Blames 'Doubtful Decisions')

"Today I couldn't get the off-spinner (Nasir Hossain) away and he hit a four and a six in an over against him. That kept me from taking any unwarranted risk. He also rotates the strike excellently when required and doesn't let any scoreboard pressure build on his partner. Having him in the middle-order is very advantageous for us. I feel it's a very good move," he added.(Dhoni Gets Raina's Support)

After being outplayed in the first two games to lose their first bilateral series against Bangladesh, India fought back to win the final ODI by 77 runs.

Young Bangladesh left-arm pacer Mustafizur Rahman was the star of the series with 13 wickets in his bag. Dahwan though believes that the "unknown factor" and favourable pitch conditions made the bowler more effective.

"First of all there was the unknown factor since we had never seen or faced him before. Secondly, he knew the conditions very well. His slower ball was very effective here because he was getting that turn from the wicket. He bowls that slower one at the right length and so, was the perfect bowler for this pitch," he said.

Dhawan, who also scored a strokeful 173 in the lone Test against the hosts, admits that the Men in Blue were hurt by the opening two losses.

"We were really hurt that we lost the series against Bangladesh. The bottom line was that they played good cricket and we didn't. Those two losses hit everyone hard and we all looked back at them and tried to find why we lost. It shook everyone knowing that we lost to them despite being a much better team.

"That really fired us up to put everything into this last match. Also, after playing two matches here, we had a much better idea of the wicket today. We got into that rhythm and made it count," said the left-hander.

Comments
Topics mentioned in this article
India Cricket Team Shikhar Dhawan MS Dhoni Ind vs Ban, 2015 Cricket
Get the latest updates on IPL Auction 2023 and check out  IPL 2023 and Live Cricket Score. Like us on Facebook or follow us on Twitter for more sports updates. You can also download the NDTV Cricket app for Android or iOS.