Team India is going through a phase where one captain has taken over from another in Test cricket and the two are very different personalities. Here are the top-5 differences between Mahendra Singh Dhoni Dhoni and Virat Kohli the captains. 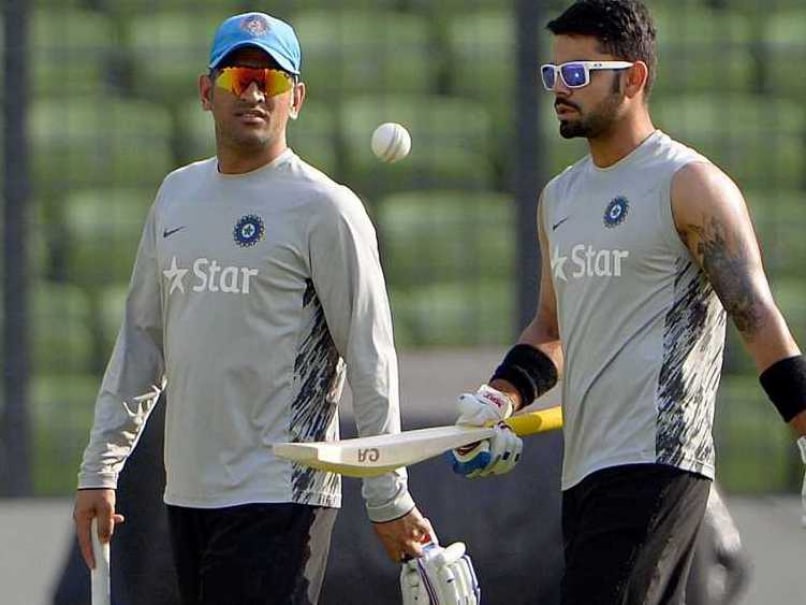 The biggest difference between Mahendra Singh Dhoni and Virat Kohli seems to be their style of answering tough questions.

Ahead of India's departure for the 2013 ICC Champions Trophy, when MS Dhoni was asked uncomfortable questions about the IPL spot-fixing and betting scandal, Dhoni chose to stay completely silent. There was not even a 'no comment' from MSD. That despite the fact that the Team Principal of his IPL franchise Chennai Super Kings, Gurunath Meiyappan was in the eye of the storm.

Contrast that with Virat, who never shies away from taking tough questions. When he was asked if he was in a relationship with Anushka Sharma, he said, "Whatever there is, it's in front of everyone. We are not hiding anything, we are not trying to hide anything. I don't want to hide anything." (Dhoni Gives You Enough Chances to Succeed, Says Dwayne Smith)

Later, when Anushka was blamed by some on social media for Virat's below-par World Cup performance, the new Test captain didn't duck any questions. Instead, he chose to face the criticism against Anushka head on, saying, "I would say I was hurt and the people who said things and the way they were said, they should be ashamed of themselves."

Another big difference between the two captains seems to be their take on the controversial Decision Review System.

While Dhoni has never been a fan of DRS and has made his displeasure public on a number of occasions, Virat doesn't seem completely averse to it.

3.Minimising Damage vs Going For The Win

Another big difference between Dhoni and Virat, the captains is that while Dhoni liked to minimise damage, Virat likes to go all out for a win.

The Adelaide Test on India's last tour of Australia is the perfect example. India were 277/5, chasing 364 to win. Most captains would settle for a draw in a situation like that. Virat, who scored two centuries in that match, however asked his team to go for the win. India eventually lost the match by 48 runs.

Virat later said, "I told the guys last night also that whatever target they give us, believe that you can chase it. I believed throughout in my ability and the guys that we can do it."

The Fatullah Test versus Bangladesh is another example of how things have changed under Virat's captaincy. Though incessant rain made sure that no result was possible, there was no sign of the Indian players taking their foot off the pedal, even on the last day.

Sanjay Manjrekar in fact tweeted to say, "33 overs to go with no chance of a win and the Indian team playing like their lives depended on it. Great attitude!"

Compare that with the Durban Test of 2013, where Dhoni didn't take the 2nd new ball when it was due. In fact, the umpires had to intervene and India finally took the new ball 66 overs after it was due. When the new ball was due, the Proteas were 251/4, but Dhoni decided to contain and not attack. Rahul Dravid later criticised Dhoni's defensive mindset, saying MSD will have to take risks to win matches overseas.

In the 2014 Wellington Test, Dhoni's defensive attitude was showcased again. The Kiwis were 94/5, still needing 130 runs to avoid the follow on and yet Ishant Sharma was bowling without a slip cordon. Brendon McCullum scored a triple century as the match ended in a draw.

Dhoni almost always liked to strengthen his batting in Tests. The 7 batsmen-4 bowlers formula is one that Dhoni liked the most. In fact, in the 60 Tests that Dhoni captained, he used 5 bowlers only 9 times.

Kohli, on the other hand has made it clear that he likes the 5 bowlers formula, believing that it gives him the best chance to take 20 wickets in a Test match. That's exactly what we saw in the first Test where he was the designated captain, with 3 pacers and two spinners playing. Virat in fact has gone on record to say, "I am a big fan of playing 5 bowlers."

5.One Calm, the Other Hands-On

On the field, Dhoni has almost always been a calm and composed captain who never lets his emotions get the better of him.

Virat Kohli meanwhile is someone who comes across as a very hands-on captain. Someone who is always ready to walk up to his bowlers and give them some advice. Constantly motivating his players and stepping in to break up on-field fights.

The old must make way for the new. Virat will have to live up to a lot of expectations as India's new Test captain, but whatever his captaincy record ends up being, the next chapter in India Test cricket promises to be an entertaining one.

Comments
Topics mentioned in this article
MS Dhoni Virat Kohli Ind vs Ban, 2015 Cricket
Get the latest updates on IPL Auction 2023 and check out  IPL 2023 and Live Cricket Score. Like us on Facebook or follow us on Twitter for more sports updates. You can also download the NDTV Cricket app for Android or iOS.