Li Na, 30, took the positives from her campaign, which included big wins over higher-ranked duo Sharapova and Agnieszka Radwanska, and hoped she could carry her resurgent form into the rest of the season. 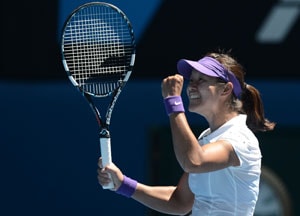 China's Li Na was hopeful of claiming a second French Open win this year after her appearance in the Australian Open final ended in tears, injury and defeat.

The sixth seed from Wuhan did her best to put a positive spin on Saturday's loss to Victoria Azarenka, claiming it may be a good omen after she also lost the 2011 Melbourne final before triumphing in Paris.

Li was one set up when she twisted her left ankle, and then after a long break for Australia Day fireworks she fell again and banged her head, briefly blacking out.

The dazed Li, despite a crowd which was largely on her side, was unable to stop defending champion Azarenka as the world number one took control of the deciding set to win 4-6, 6-4, 6-3.

Li pointed out that Maria Sharapova also lost last year's final before winning in Paris, and that Ana Ivanovic followed the same pattern in 2008.

"I think last year Maria did the same," said Li. "She lost the final here and she won the French. Also one year Ivanovic did the same. So I don't know, maybe I can do the same this year, as well."

Li may feel she deserves a change in fortunes after Saturday's final went worse than anyone could have imagined.

With both players showing their nerves, there were 16 breaks of serve in the 29 games, and out of 192 points, 85 were settled by unforced errors -- 57 of them from Li.

Coupled with her ankle problems and heavy blow to the head, it was a horror show for the Chinese star in her third Grand Slam final.

But Li, 30, took the positives from her campaign, which included big wins over higher-ranked duo Sharapova and Agnieszka Radwanska, and hoped she could carry her resurgent form into the rest of the season.

Li, who won in Shenzhen earlier in the month, will also return to world number five, equalling her career high, when the new women's rankings are released on Monday.

"Yeah, of course I'm a little bit sad that I lost in the final. But if I look from the beginning of the year until now, I still have to say I'm proud of myself," she said.

"I mean, I'm really feeling good on the tennis court again. So, yeah, I hope I'll have very good results in 2013."

Chinese media, known for their difficult relationship with Li, also heaped praise on her pluck and persistence during a tough final.

The Sina Sports website said she had "a fighter's heart", and her home city's Wuhan Evening News said Li's "calm and comfortable reaction and bright smile left an even deeper impression on us" than her two falls.

Comments
Topics mentioned in this article
Tennis Australian Open 2013 Na Li Ana Ivanovic Maria Sharapova
Get the latest updates on India vs England Series, India vs England , live score and IPL 2021 Auction . Like us on Facebook or follow us on Twitter for more sports updates. You can also download the NDTV Cricket app for Android or iOS.