India v Australia: India captain Virat Kohli was left disappointed after a review taken during the third T20I was declared null and void by the third umpire. 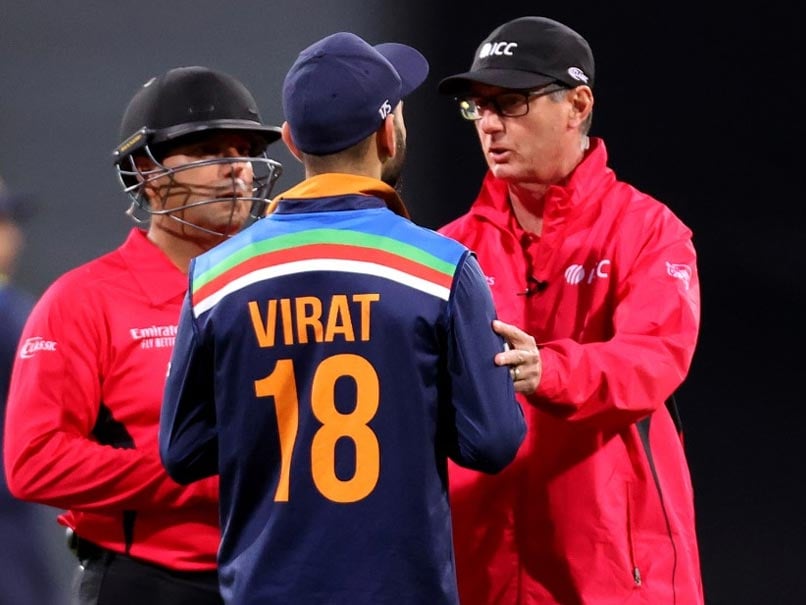 India vs Australia: Virat Kohli was left disappointed after a review taken by him was refused.© AFP

Virat Kohli was left frustrated after a review taken by India during the third Twenty20 International against Australia in Sydney was declared "null and void" by the third umpire as the review had been taken by India after replays were shown on the big screen at the Sydney Cricket Ground. The incident happened in the 11th over of the Australian inning when a delivery from T. Natarajan hit Matthew Wade on the pads and India's half-hearted appeal for leg before was turned down by the on-field umpire. Virat Kohli took a review and the third umpire went through with the process for a while before stopping to declare the review null and void as replays had already been shown on the big screen before India asked for the DRS review.

Replays on TV showed Wade pointing out to the on-field umpire Rod Tucker that replays had been shown on the big screen before Kohli opted for DRS.

Moments later, the voice of the TV umpire was heard on air and he too pointed out the same and called off the review.

Kohli was displeased with the move and approached the on-field umpires for a chat.

Play resumed after Kohli and the umpires had an animated discussion.

Wade went on to register his third T20I half-century, the second of this series.

Australia ended up beating India by 12 runs to avoid a series whitewash as the visitors were unable to chase down the 187-run target set by the hosts.

"That LBW was is in a strange manner because we were still discussing whether the ball was going down or not and within 15 seconds the replay was on screen," Kohli said in the post-match press conference.

"And we decided to go for the review but the umpire said nothing can be done. These mistakes shouldn't be done at the highest level and in a very important game this could be very costly," he added.

India won the T20I series 2-1 after Australia beat them by the same margin in the ODIs. The two teams will now face off in a four-match Test series starting December 17.

Matthew Wade T Natarajan Australia vs India 2020-21 Australia vs India, 3rd T20I Cricket
Get the latest updates on ICC T20 Worldcup 2022 and CWG 2022 check out the Schedule, Live Score and Medals Tally. Like us on Facebook or follow us on Twitter for more sports updates. You can also download the NDTV Cricket app for Android or iOS.