India clinched the Test series 2-1 as the Sydney Cricket Ground Test ended in a draw due to rain. 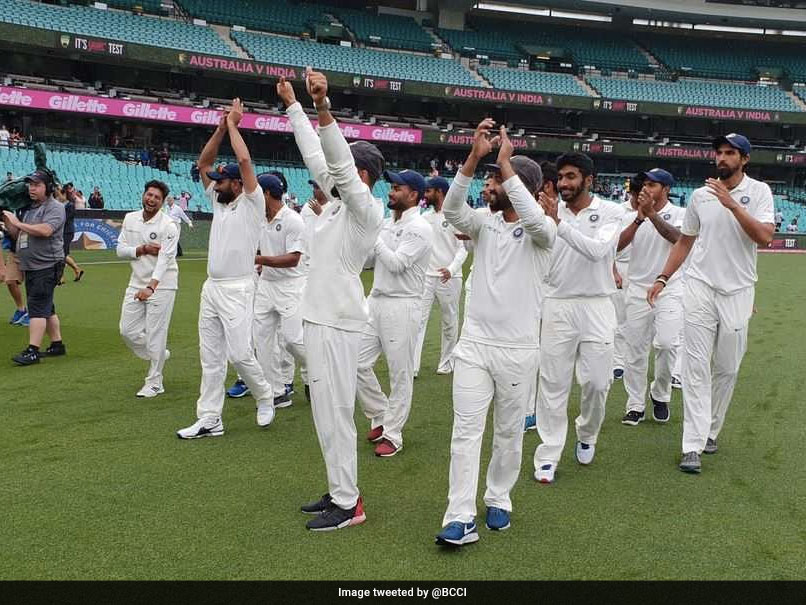 India clinched the Test series 2-1 after the Sydney Test ended in a draw.© Twitter/BCCI

Virat Kohli led Team India to a historic Testseries victory versus Australia, after the Sydney Test ended in a draw due to rain. India clinched the series 2-1, having won the two Test matches in Adelaide and Melbourne, and losing the one in Perth. This has expectedly sent Twitter into a meltdown, where netizens are eulogising Virat Kohli, Jasprit Bumrah, Cheteshwar Pujara and the rest of Indian set-up. Cheteshwar Pujara has been adjudged man of the series (and man of the match for the SCG Test) for scoring three exceptional hundreds, which propelled India to such a historic milestone.

Congratulations to India for winning the Test series in Australia for the first time ever@Jaspritbumrah93 I was so impressed with your performance throughout this series! Fast,... https://t.co/7fMSNEeJ1q

Congratulations to @imVkohli & his Indian Team on winning their first ever series in Australia. They outplayed @CAComms in all departments. Very well deserved. #AUSvIND #pinktest https://t.co/UkEJcrzJ3I

Well played @BCCI @imVkohli and his team, outplayed the Aussies boys.@cricketcomau . Congrats on your first series win in Australia and well done to the WALL Pujara @cheteshwar1 for a great series. Looking forward to the Aussie boys bouncing back . Bring on the ODI's now. https://t.co/apxIbWXm9v

Opting to bat in the final Test, India took a commanding position as Cheteshwar Pujara and stumper Rishabh Pant's respective 193 and 159-run knocks guided India to a massive 622/7 in their first innings. India then rode on chinaman Kuldeep Yadav's fifer to bundle out the home side on 300 runs before enforcing a follow-on.

Australia were six for no loss in their second innings and play wasn't possible on the final day of the Test, thanks to the continuous rains as the contest ended in draw.

Earlier, wet conditions had forced an early finish on day three and allowed less than two hours play on day four, before completely washing out the final day on Monday.

In the bowling department, pacer Jasprit Bumrah turned out to be the most effective bowler for the visitors after bagging 21 wickets from four games while his partner Mohammed Shami also scalped 16 wickets.

Virat Kohli Tim Paine Australia vs India 2018/19 Australia vs India, 4th Test Cricket
Get the latest updates on India vs South Africa and check out  Schedule, Results and Live Score. Like us on Facebook or follow us on Twitter for more sports updates. You can also download the NDTV Cricket app for Android or iOS.