"By Far This Is My Best Achievement": Virat Kohli Rates Test Series Win In Australia Above World Cup Victory

This is India's first Test series win Down Under in 71 years and 11 attempts. 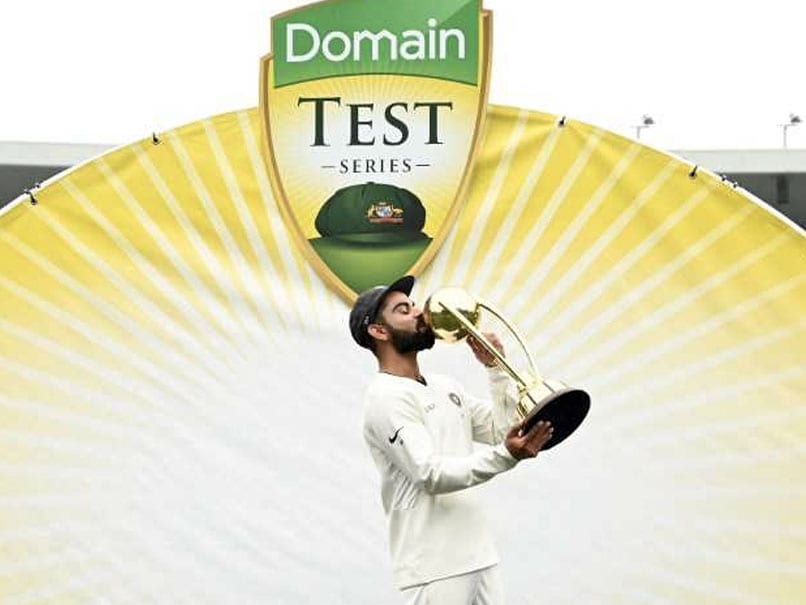 Virat Kohli scored 282 runs in four-Test series, including a century in Perth.© AFP

Virat Kohli became the first Indian and Asian captain to win a Test series in Australiaafter the fourth and final Test ended in a draw in Sydney on Saturday. The 30-year-old Virat Kohli led the Indian side by example, scoring 282 runs in four-Test series, including a century in Perth. Following India's historic victory Down Under, Virat Kohli termed it as the most special moment of his career, adding that he is proud to lead such a skillful set of players.

"Firstly I want to say, I've never been more proud of a team than this one. The culture we've been able to build over the last 12 months. Our transition started here when I became the captain for the first time," Kohli said at the post-match presentation at the SCG.

"Only one word to say, I'm proud. To lead these players is an honour and a privilege. They make the captain look good. Definitely deserve to enjoy this moment," he added.

Having won the first Test in Adelaide and third in Melbourne, the number one-ranked Indian Test team clinched the four-match Test series by 2-1. Australia had won the second Test in Perth, while the fourth Test in Sydney ended in a draw due to persistent rain in last two days.

Kohli, who was part of the Indian ODI team that won the ICC World Cup in 2011. Under the captaincy of MS Dhoni, India had won their second title at the mega-event after Kapil Dev's team in 1983.

The overjoyed Indian skipper didn't hesitate to rate the recent Test series triumph above the World Cup win. "By far this is my best achievement. Has to be on top of the pile. When we won the World Cup, I was a young player. I saw the others getting emotional," Kohli said.

This is India's first Test series win Down Under in 71 years and 11 attempts. This marked Kohli's fourth Test series triumph away from home. He earlier led the team to victories in Sri Lanka and the West Indies.

According to the Indian captain, the recent series win will set a new momentum for him. "This series will give us a different identity as a team. What we've been able to achieve is something to be really proud of. That's something that we spoke about, just wanted to go back to basics, not be flamboyant.

"Definitely, this is just the stepping stone for us. The average age in the team is quite low. The most important thing for us have been belief. Our intent has always been good, and that is to take Indian cricket forward," Kohli concluded.

Virat Kohli Australia vs India 2018/19 Cricket Australia vs India, 4th Test
Get the latest updates on India vs Australia and check out  Schedule, Results and Live Score. Like us on Facebook or follow us on Twitter for more sports updates. You can also download the NDTV Cricket app for Android or iOS.