Chasing 198 to sweep series, Rohit Sharma and Virat Kohli hit a fifty each, but it was Suresh Raina's last-ball four that helped India clinch a thrilling seven-wicket win against Australia. 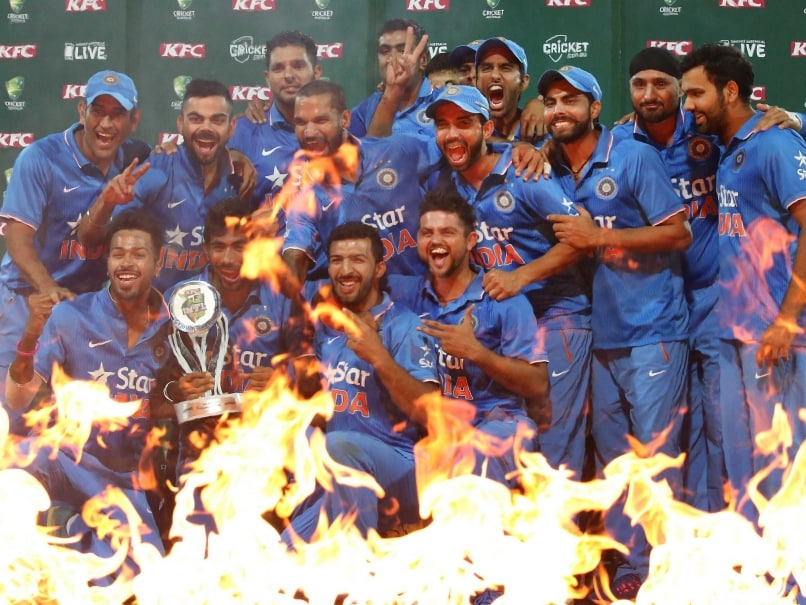 In a stunning run chase India won their third and final Twenty20 match against Australia off the last ball on Sunday to take the series 3-0. (Highlights | Scorecard)

Australia made a formidable 197 for five but India replied with 200 for three against an inexperienced attack and also claimed world No.1 ranking.

They needed 17 to win off the last over and Suresh Raina hit a boundary off the final ball for victory.

Stand-in Australian skipper Shane Watson, who had scored an unbeaten century and also claimed the vital wicket of Shikhar Dhawan, appeared to have won his side the match when he conceded just five runs from the 19th over.

But rookie bowler Andrew Tye (0-51) could not handle the pressure in the 20th. The first two balls went for a four and six from Yuvraj Singh (15 not out), paving the way for Raina's last-ball heroics.

Raina should have been stumped by debutant Cameron Bancroft off the first ball he faced from young spinner Cameron Boyce (2-28), and made the most of his good fortune to score 49 off 25 balls.

For much of the chase India looked to have the target under control after taking full advantage of some wayward bowling by paceman Shaun Tait (0-46). But Sharma (52) and Kohli (50) both fell to Boyce as the match tightened up.

Kohli Man of the Series

Kohli, named man of the series, was thrilled to have completed a clean sweep of the T20s after India lost the one-day international series.

"We wanted to finish off well and get a clean sweep and we've done it," he said.

The much-maligned Watson led from the front for Australia in a masterful solo performance.

He probably played himself into Australia's squad for the upcoming Twenty20 World Cup with his unbeaten 124 from 71 balls, the second-highest score in the format at international level.

The 34-year-old was promoted to the captaincy due to the injury-enforced absence of Aaron Finch and opened the batting.

Dropped on 56 by Kohli, he hit six sixes and posted the biggest T20 international score by an Australian.

Comments
Topics mentioned in this article
Usman Khawaja Shane Watson India Cricket Team Australia Cricket Team Australia vs India 2015-16 Cricket
Get the latest updates on ICC T20 Worldcup 2022 and CWG 2022 check out the Schedule, Live Score and Medals Tally. Like us on Facebook or follow us on Twitter for more sports updates. You can also download the NDTV Cricket app for Android or iOS.