Australia smashed a record 309 for three at Gabba to take a 2-0 lead against India in the five-match ODI series. Rohit Sharma's century went in vain for the visitors again as Aaron Finch, Shaun Marsh and George Bailey hit brisk fifties.

Chasing India's 308/8, Australia scored a record 309/3 in Brisbane on Friday. The previous highest chase at the Gabba was 301 when Australia beat England in 2014. Friday's seven-wicket victory gave Australia a 2-0 lead in the five-match series against India. The Aussies won the first match in Perth on January 12.(Rohit Sharma, Ajinkya Rahane Steal the Show in Brisbane)

"It seems we have to score in excess of 330 runs to win a match. That will put a lot of pressure on the batsmen to score more," Indian skipper Mahendra Singh Dhoni said after the match, adding: "The morale is good but we need to play some more shots."(Scorecard | Highlights)

Rohit Sharma's century, he had scored a ton in Perth too, went in vain again as India's bowlers could not defend a 300-plus total for the second time in this series. Poor catching only added to India's problems as Ishant Sharma dropped a sitter after Shaun Marsh mistimed a big hit when he had scored 19.

Marsh went on to score 71 off 84 balls and his 145-run opening wicket stand with Aaron Finch (71 off 81 balls) laid the foundation for a fine chase on a batting wicket at Brisbane. 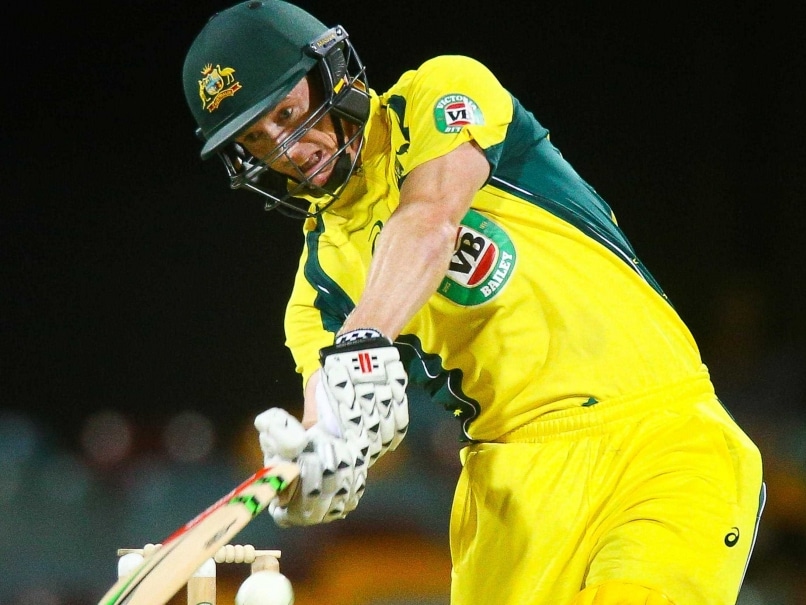 George Bailey reached his 18th ODI fifty with a six off the Barinder Sran's bowling.

George Bailey, who scored a century in Perth, remained unbeaten on a 58-ball 76 and his 78-run third wicket association with skipper Steve Smith (46 off 47 balls) put Australia on course for another emphatic win. The hosts won with six balls to spare.

Earlier on Friday, Man of the Match Rohit struck his second successive hundreds of the series and featured in two century stands to help India post 308 for eight.

"It is very disappointing to score a hundred and finish on the losing side. It's the team that matters," Rohit said after the match.

Rohit (124) joined hands with Test skipper Virat Kohli (59) to rebuild the innings and partnered the selfless Ajinkya Rahane (89) to lay the foundation for a huge total before Australia pegged the tourists back in the final 10 overs.

For the second successive match, Dhoni won the toss and opted to bat and opener Shikhar Dhawan again fell cheaply to pace with Joel Paris claiming his first ODI wicket in his second match.

Rohit and Kohli were once more left to rebuild the innings, which they did with some elegant shot-making as India sought to level up the five-match series after falling behind in Perth.

The opener dug out a Kane Richardson yorker to bring up his fifty in 61 balls, while Kohli needed one delivery less for his 36th half-century in this format.

The duo, who had forged a 207-run stand in India's five-wicket defeat at the WACA, added 125 before Kohli paid the price for attempting to steal a non-existent second run.

Rohit was lucky to reach his 10th ODI century, after snickometer confirmed he, then on 89, had edged Paris but Australia's caught-behind appeal was turned down by the umpire.

Rahane proved a perfect foil for Rohit, shunning risks and still finding the ropes to bring up a run-a-ball fifty in their 121-run stand when boundaries flowed from both ends.

Rohit's 127-ball knock ended in bizarre circumstances when Rahane's straight drive brushed bowler James Faulkner's fingers before hitting the stumps with the non-striker out of his crease.

The boundaries soon dried up and the visitors lost five wickets in the final five overs while adding 38 runs to their score.

Rahane perished in the penultimate over after a fluent 80-ball knock as India settled for what appears to be a par score at the Gabba.