Hima Das has been in focus for winning five gold medals in races she has run in Europe in July. 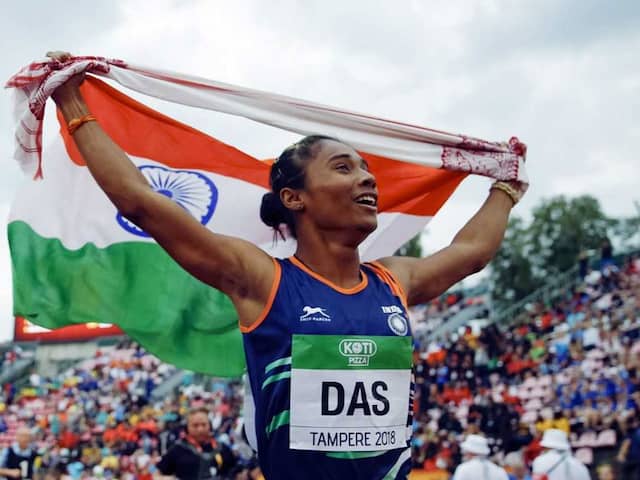 Hima Das has already won five gold medals so far in the month of July.© PTI

Hima Das has been making headlines for her superlative run in July, which has seen her win five gold medals since July 2. The 19-year-old sprinter from Assam has become a social media sensation thanks to her gold medal-winning exploits with congratulatory messages coming in from all parts of the world. Among the well-wishers were the likes of PM Narendra Modi, cricket legend Sachin Tendulkar, Bollywood star Anushka Sharma and many more. Anushka Sharma tweeted a special message for India's "golden girl" to which Hima Das responded by saying she was a "big time fan" of the actress.

Thank you @AnushkaSharma I am a big time fan of you. https://t.co/x8bl7tTbB4

Phenomenal achievement by our golden girl @Himadas8. You are certainly making us proud. Hats off to your spirit. Wish you continued success. #HimaDas

Hima Das' latest gold medal came in the 400m race in Prague where she took the top podium spot with a time of 52.09 seconds. This though was well short of the Indian sprinter's personal best of 50.79 seconds, which she achieved during Asian Games 2018 in Jakarta.

This was Hima Das' fifth gold since July 2 when she first took part in a competitive race in Europe.

In her first competitive 200m race of the year on July 2, Hima had clocked 23.65s to win gold at the Poznan Athletics Grand Prix in Poland.

Then on July 8, she won her second 200m gold at the Kutno Athletics Meet, also in Poland. Despite a sore back, the Assam runner had clocked 23.97 seconds to win the gold while Kerala runner VK Vismaya grabbed silver with a time of 24.06 seconds.

On July 13, she won her third 200m gold at the Kladno Athletics Meet in Czech Republic with a time of 23.43 seconds.

Earlier this year, Hima Das had failed to complete her 400m heat in the Asian Athletics Championship in April due to a back spasm.