Hima Das has claimed five gold medals in races she ran in Europe over the past 20 days.

Hima Das made headlines after she won four gold medals in 200m and one in 400m sprint in the last 20 days. Even though some of these performances came against her fellow-Indian track and field athletes in the European competitions, her efforts are being lauded on social media. London Olympics bronze medallist shooter Gagan Narang believes that people noticing her achievements is great for the sport. "The country is deprived of champions. We need to build champions for the ecosystem. When you have champs, people look up to them and are encouraged to take up sports. It is very important that we have champions in every field, that is how the sport moves forward. That is why Hima Das' achievement is important. It is great that people are noticing her. Social media has a strong presence now," Gagan Narang told NDTV. 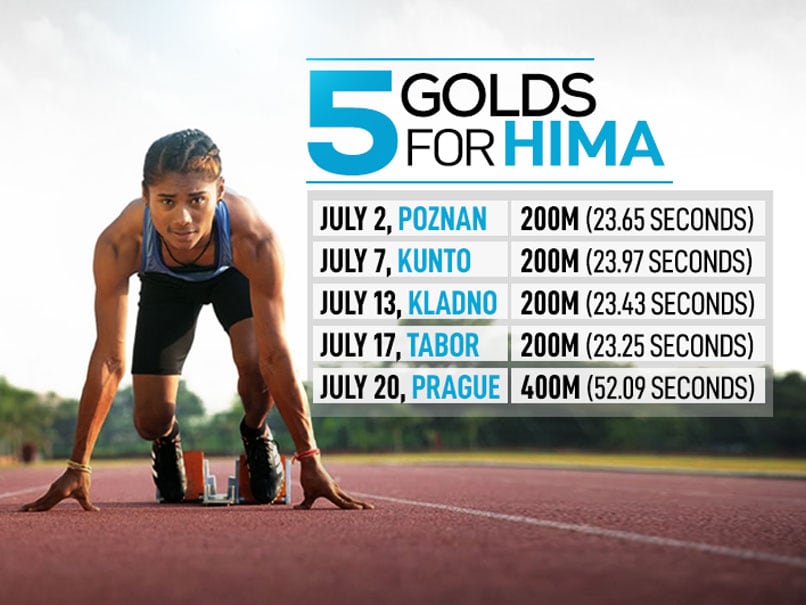 But not everyone is convinced with Hima's effort because the timings are not enough to qualify for the World Championships in Doha in September. "You need to compete against better people. In the four 200m races she ran in Europe, she was not running against runners who are better than her. You would like to compete against better people, people who train harder." said senior journalist G Rajaraman.

Though Hima's hard work for now has borne fruits, her brand value has tripled. Today, she commands around Rs 60 lakh per endorsement, as against Rs 30-35 lakh previously.

"Her performances have made our job easier. Brand value is directly proportional to consistent performances. People are talking about the World Championship and the Olympics here. She has a long way to go. We can't put her under pressure," said her manager Neerav Tomar, the Managing Director of IOS Sports.

Hima is an integral part of the 4x400m women's relay team and hopes are pinned on them for not just to qualify but also win a medal in Tokyo 2020.

Narang described the pressure of being in the Games and what Hima Das needs to do in future, "Pressure of Olympics can't be replicated. The focus needs to be very clear. Hima needs to keep things uncomplicated.

"An athlete is hungry for all the help he/she can get in terms of mental, physical, psychological aspect. One major mistake athletes make is get over complicated when games draw close. Hima needs to keep this uncomplicated, and keep doing things that she has been doing," Narang added.

Everyone will hope that the hype around Hima does not distract the 20-year-old from the process that she is charting for Olympic glory.

Comments
Topics mentioned in this article Athletics Other Sports
Get the latest Indian Premier League 2020 news, check out the IPL 2020 schedule, Cricket live score . Like us on Facebook or follow us on Twitter for more IPL 2020 updates. You can also download the NDTV Cricket app for Android or iOS.
Highlights
Related Articles