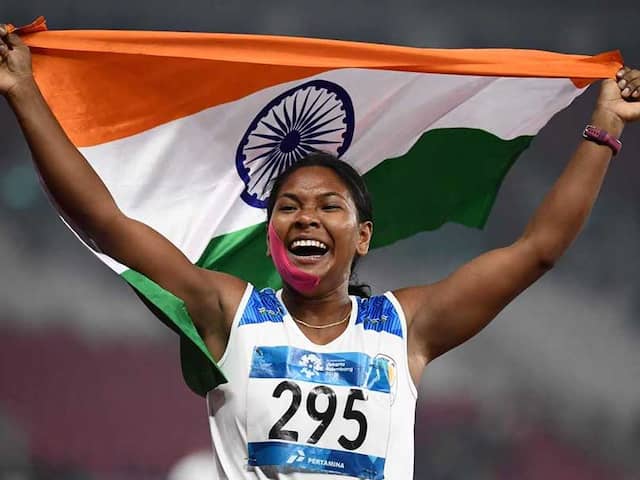 Swapna Barman created history by winning the women's heptathlon title while Arpinder Singh ended India's 48-year wait for men's triple jump gold as Indian athletes enjoyed another successful day at the 18th Asian Games on Wednesday. Experienced sprinter Dutee Chand grabbed her second silver medal at this year's Asiad after finishing second in the women's 200 metres event. Swapna's triumph in the women's heptathlon is the first-ever gold for India in the event at the Asiad. Swapna posted a score of 6026 points. Wang Qingling of China scored 5954 to take silver while Japan's Yuki Yamasaki produced her personal best of 5873 to bag the bronze medal. Purnima Hembram, the other Indian in the fray, finished fourth with 5837 points.

In men's triple jump, Arpinder won gold with an effort of 16.77 metres. He pipped Uzbekistan's Ruslan Kurbanov, who took the silver medal with a personal best jump of 16.62 metres. The bronze medal went to China's Cao Shuo, who jumped 16.56 metres.

Before the 25-year-old Arpinder, the previous Indian champion at the Asiad was Mohinder Singh Gill in 1970 with an effort of 16.11m. AV Rakesh Babu, the other Indian in the fray, was sixth with a best attempt of 16.40 metres. Arpinder flopped in his first attempt. After the invalid jump, he came back strong with a jump of 16.58 metres in the second attempt which made him the leader after the first two attempts.

Babu, in his second attempt of 16.40, was second behind his compatriot, even as Ruslan till then had his best of 16.28. Arpinder gained further ascendancy when he came out with a jump of 16.77m. Ruslan too made his best attempt of 16.62 metres. The Uzbek athlete, however, could not topple Arpinder as the former made attempts of 15.99, 16.43, 16.41 in his final three chances respectively.

Arpinder jumped 16.08 in his fourth attempt before fouling the last two attempts.

China's Cao delivered his best in his sixth and last attempt with a jump of 16.56 to push Japanese Kohei Yamashita to the fourth spot.

Yamashita had fouled his last three attempts. His best of 16.46 came in his third attempt.

In the women's 200m, Dutee clocked 23.20 seconds to finish behind Bahrain's Edidiong Odiong, who claimed the gold medal with 22.96 seconds. Wei Yongli of China got the bronze medal with a time of 23.27 seconds at the Gelora Bung Karno Sports Stadium. Dutee, who also took silver in the 100m, grabbed her second silver of the Games. The Odisha athlete had topped the standings in the semi-finals on Tuesday with a time of 23.00 seconds -- her personal best -- while Odiong was second in 23.01 seconds.

In the final, the 22-year-old Dutee was 0.20 seconds slower than her Tuesday's performance. Running in the third lane, Dutee started strong and in the first 3040 metres, she was in the third position.

But she peaked and gave a tough fight to 21-year-old Odiong, who seemed the favourite from the start. After the 7-metre mark, it was nearly obvious that the top two positions would be taken by Odiong and Dutee respectively.  Odiong, with a long stride, never looked beatable by Dutee. The latter then just had to held off Yongli, who was pushing to the limit. Asian Championships bronze medallist Olga Safronova, who had finished a spot ahead of Dutee in the Bhubaneswar meet in 2017, claimed the fourth spot. The Kazakh sprinter finished with a timing of 23.32.

Earlier in the morning session, Khushbir Kaur finished fourth in the women's 20km race walk. Khushbhir, who had bagged silver medal at the 2014 edition, clocked one hour, 35 minutes and 24 seconds to finish one minute and 22 seconds behind bronze medallist Kumiko Okada of Japan.

China's Jiayu Yang and Shijie Qieyang claimed the top two positions respectively. Both clocked a Games record timing of one hour, 29 minutes and 15 seconds but Jiayu was declared the winner in a photo finish.

In the men's race, China's Wang Kaihua won the gold medal with a timing of one hour, 22 minutes and 04 seconds. He was 0.06 seconds faster than Japan's Toshikazu Yamanishi.

The bronze medal went to Jin Xiangqian, who posted a time of one hour, 27 minutes and 58 seconds.