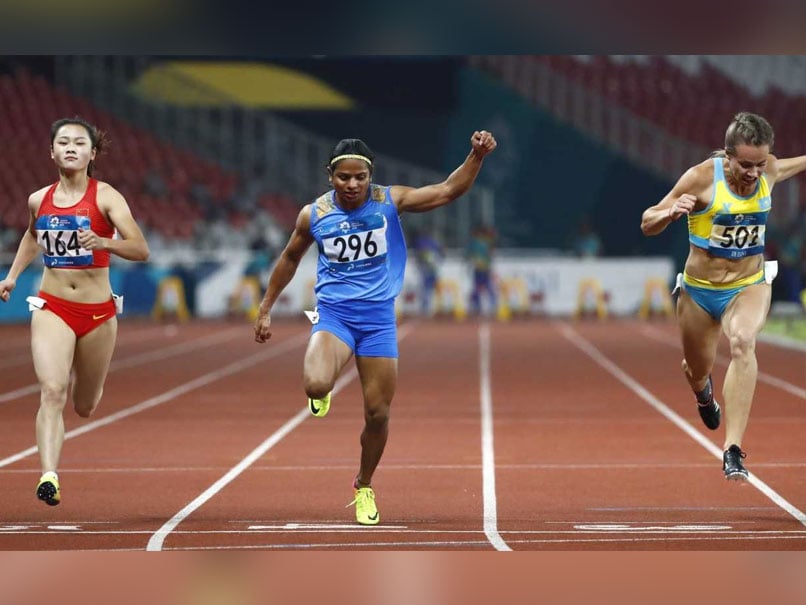 India's sprinter Dutee Chand won the third silver in Athletics (women's 100M) on Sunday at the Asian Games. With this medal, India's total medal tally now stands at 36. Before Dutee's event, India's men's and mixed bridge teams had won two bronze medals in the respective categories. India had also added two silver medals in athletics after Hima Das and Muhammed Anas won the silver medals in their respective 400m events. India had opened their medal account on Day 8 of the Asian Games 2018 from an unlikely source, winning two silver medals in Equestrian Eventing events. First, it was 26-year-old Fouaad Mirza, who was riding Seigneur Medicott horse at the Jakarta International Equestrian Park, scored a total of 26.40 to claim the second position on the podium in the Equestrian Eventing Individual event. This was followed by another silver for India in the Equestrian Eventing Team event.

Meanwhile, Saina Nehwal made history by securing India's first women's singles badminton medal. The star shuttler outclassed Ratchanok Intanon of Thailand 21-18, 21-16 in the quarters to march into the semifinals of the event and assure herself of at least a bronze medal.

Saina will face World No.1 Tai Tzu Ying of Chinese Taipei for a place in the final.

PV Sindhu followed suit and defeated Jindapol Nitchaon of Thailand 21-10, 16-21, 21-14 to make it to the semis, assuring India of another medal.

Women archers also assured India of another medal by coming from behind to beat Chinese Taipei 227-225 in the Compound semifinal. India will take on top-ranked South Korea for the gold on Tuesday.

India ended Day 7 action with 29 medals in their kitty.

Comments
Topics mentioned in this article
Asian Games 2018 Equestrian Badminton PV Sindhu Saina Nehwal Other Sports
Get the latest updates on IPL 2021, check out the IPL 2021 Schedule and Indian Premier League Live Score . Like us on Facebook or follow us on Twitter for more sports updates. You can also download the NDTV Cricket app for Android or iOS.