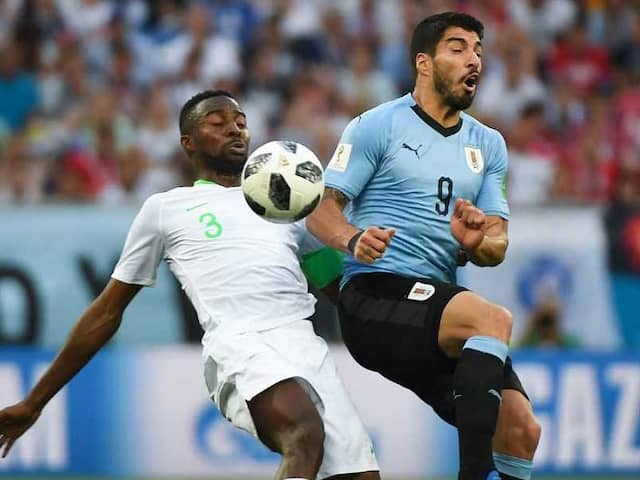 Star player Luiz Suarez hit a fine header as he marked his 100th international appearance with a goal as Uruguay beat Saudi Arabia 1-0 in their FIFA World Cup match at Rostov Arena in Rostov-on-Don on Wednesday. Suarez scored his 52nd goal for Uruguay as his team dominated the early proceedings of the game. Saudi Arabia didn't have any clear-cut chances but they played well after going behind in the 23rd minute. Both teams went into the half-time with the score at 1-0 in favour of Uruguay. The second half saw fewer chances come Uruguay's way while Saudi Arabia kept pushing hard for an equaliser but failed to get their goal. The Saudi defenders were fantastic at the back after conceding against Uruguay but the South American team held onto their nerves as they got over the line with a laboured win. (Highlights: Uruguay vs Saudi Arabia)

And so, Group A after two rounds of fixtures...

Congratulations to @Uruguay, who have qualified for the knock-out stages!#URU#WorldCup pic.twitter.com/LZpWa1ggVH

22:17 IST: It looks comfortable for Uruguay now. Saudi Arabia will be gutted to be at the receiving end. They played extremely well after the hammering they got from Russia in their first game. Final l2 minutes to go in this match.

22:10 IST: Suarez is down again for Uruguay as the striker is clutching his head after a collision. Final 7 minutes to go.

22:00 IST: Saudi Arabia players are getting frustrated as they are failing to break the deadlock. If it stays like this, Uruguay will go through to the next round. | Uruguay 1-0 Saudi Arabia after 73 minutes

21:52 IST: Osama Hawsawi has defended like a rock for Saudi Arabia. He is so composed and organised at the back. Rodrigo Bentancur misses a glorious chance to take a 2-0 lead for Uruguay as he overhits a beuatiful Cavani cross. | Uruguay 1-0 Saudi Arabia after 62 minutes

21:46 IST: Uruguay are playing it safe for the time being. Saudi Arabia are chasing the game. They are getting closer to the goal but failing to get it back of the net. | Uruguay 1-0 Saudi Arabia after 57 minutes

Luis Suarez - the first player to score at three different editions of the #WorldCup for @Uruguay! pic.twitter.com/B2xfSuZd47

21:37 IST: FREE KICK! This is Suarez region. He will look to score his second goal. Deflection on it and a good stop by the Saudi keeper. 50 minutes up.

21:17 IST: Luis Suarez header is the difference as Uruguay take a 1-0 lead over Saudi Arabia at halftime.

We've had ANOTHER goal from a set-piece at this #WorldCup#URUKSA pic.twitter.com/H22ZvQxtEX

21:12 IST: Saudi Arabi's number 17 Taisir Al-Jassim is limping and is off the field to get some treatment. Three minutes to go for halftime.

21:09 IST: Uruguay have had 2 shots on target and one landed back into the net. Saudi Arabia had one shot on target so far in this match. Final 6 minutes to go for the first half.

21:04 IST: A flurry of chances for Saudi Arabia but Uruguay defended in numbers.

20:53 IST: GOAL! Luis Suarez breaks the deadlock in the 23rd minute. A superb header. He marks his 100th international game with a fantastic header. | Uruguay 1-0 Saudi Arabia after 24 minutes

On his 100th #URU appearance, too!@LuisSuarez9 grabs his first goal of the 2018 FIFA #WorldCup to give @Uruguay the lead!#URUKSA 1-0 pic.twitter.com/xe3pcLBBDJ

20:51 IST: Uruguay took too many touches but they're finally getting into the attacking mode. Saudi Arabia have defended well in the first quarter of the game. | Uruguay 0-0 Saudi Arabia after 20 minutes

20:42 IST: Cavani times the run perfectly but Cavani spurns the chance to score.

20:38 IST: FREE KICK for Saudi Arabia in the 7th minute. Number 7 Salman Al-Faraj steps up to take the free kick. Well struck but it hits the wall and they get a corner. | Uruguay 0-0 Saudi Arabia after 7 minutes

20:27 IST: The National Anthems of both these teams being played.

20:25 IST: Players are out in the tunnel and heading towards the pitch.

20:20 IST: Uruguay are looking to win their first two matches of a World Cup tournament for the first time since 1954.

The instrumental song accompanying the flags & players coming out of the tunnel at the #WorldCup is a new and vibrant theme by composers @HansZimmer & @LorneBalfe. pic.twitter.com/plLnzFcPi3

20:15 IST: In the earlier match, Portugal beat Morocco beat 1-0 in their Group B clash. Read them match report here.

20:13 IST: Uruguay beat Egypt 1-0 in their opening match while Saudi Arabia lost 5-0 to Russia on Thursday.

20:00 IST: Here's the formation of both Uruguay and Saudi Arabia.

19:50 IST: Saudi Arabia will be out if they lose, Egypt will be eliminated if Uruguay get at least a point.

19:32 IST: Hello and welcome to the live match updates of Uruguay and Saudi Arabia.

The last two World Cups have seen Suarez exit in ignominy. In 2010, Suarez was sent off after making a last minute "save" against Ghana, which helped avoid defeat and saw the South Americans progress to the last four. The incident became so infamous it got its own Wikipedia entry -- Suarez even described it as the best save of the tournament -- but that was nothing to what happened four years later. In 2014, he was banned from all football for four months and fined after biting Italy's Giorgio Chiellini, the third biting incident of his career. Uruguay players have hit out at the way Suarez was subsequently treated by the footballing authorities, but their protests have garnered little empathy outside the country.

Luis Suarez 2018 FIFA World Cup Football Uruguay vs Saudi Arabia, Match 19 Live Blogs
Get the latest updates on IPL 2020, check out the IPL Schedule for 2020 and Indian Premier League (IPL) Cricket live score . Like us on Facebook or follow us on Twitter for more sports updates. You can also download the NDTV Cricket app for Android or iOS.