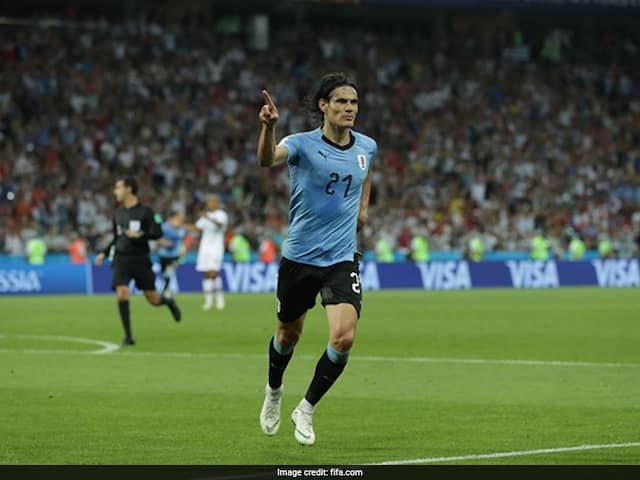 Edinson Cavani scored in either halves as Uruguay knocked out Portugal of the FIFA World Cup 2018 after a 2-1 defeat at the Fisht Stadium in Sochi. In the first-half the Paris Saint-Germain striker gave Uruguay the lead through a clinincal header while in the second half he scored the winner from a curling kick that ended in the far corner well out of the reach for Rui Patricio. Meanwhile, for Portugal Pepe scored the lone goal after the first-half as they maintained possession in the dying minutes but failed to create enough threats on the ball. Joao Mario for the Portuguese who did most of the work with the ball was the stand-out player for Portugal in the initial half. (Highlights: Uruguay vs Portugal)

So, after today's results...

01:27 IST: Thank you for joining us on all the action on our live blog, until next time, it's goodbye!

01:24 IST: Push-up keeper! Rui Patricio enters the box as Quaresma takes a corner, tucked away by Uruguay and only seconds remain before the final whistle.

01:21 IST: Ronaldo booked! For taking a dig at the referee who has disallowed a free-kick. Less than 2 minutes to play!

01:20 IST: Cristiano Ronaldo takes a shot from the 26-yard mark in space but the ball goes wide off target. Time's ticking!

01:16 IST: Diego Laxalt crosses the ball but fails to find a target man as Portugal break on the counter, take a throw-in look to hold on to possession. 4 minutes stoppage time added.

01:11 IST: Free-kick for Uruguay from their own half launches it long but Portugal clears it away. 82 minutes up on the clock.

01:06 IST: Corner for Portugal, Ronaldo steams in but fails to get even an inch of the ball as it falls  for Raphael who skies it over from outside the box. 77 minutes on the clock.

01:02 IST: Substitution - Cavani has been replaced by Cristhian Stuani.

01:00 IST: uruguay down to 10-man as Cristiano Ronaldo helps the potential match-winner Edinson Cavani off the turf, 71 minutes on the clock.

00:55 IST: Quaresma deflection forces a corner, Fonte keeps the ball inside the box but a wayward cross from Raphael will make it a Uruguay goal kick.

00:51 IST: GOAL! Edinson Cavani again! He curls the ball in the far corner, well away from the reach of Rui Patricio in the 62nd minute,

00:49 IST: Mario delivers on the second attempt, Silva gets the first header and the ball is easily collected by Muslera.

00:48 IST: Constant threat from Portugal, Hernandes breaks from the right flank but Portugal back on the attack as they force a corner on the 59th minute.

00:43 IST: GOAL! Pepe heads it home for Portugal in the 55th minute from a corner as the South Americans defence has been breached for the first time.

00:40 IST: Corner for Portugal, Bernardo delivers but the ball on re-bound falls for Raphael, who skies the ball high over the crossbar.

00:34 IST: Second-half gets underway and Portugal straight on pushed on to defend their backs after conceded an early goal in the first-half.

00:17 IST: Cavani shoots after Portugal leaves a lose ball without clearing inside the box as referee blows away for half-time. An early Cavani goal keeps Uruguay 1-0 ahead against Portugal at the break.

00:16 IST: 2 minutes added in the first-half after Luis Suarez tried to convince the referee that he was hit badly on the head, with a bit of acting.

00:11 IST: 41 minutes on the clock, Uruguay have so far been the better side. Portugal are trying to keep the ball without causing much treat to their opponents.

00:06 IST: Bernardo Silva tries to play a box inside the box, cleared away. Portugal continue on attack but Cavani has been brought down as Uruguay take a long kick inside the Portuguese half.

00:01 IST: Free-kick for Portugal from a dangerous position near the box! Cristiano Ronaldo over the ball, hits the wall and Torreira clears it away.

23:58 IST: Portugal on the break, looking to counter, moving the ball from right to left in search of penetration but the ball goes out for a Uruguay throw-in.

23:55 IST: Free-kick for Portugal, the ball gets past everyone inside the box. 26 minutes have been played.

23:51 IST: Free-kick for Uruguay in a promising position! Suarez on the ball, gets past the wall through a low effort but Rui Patricio does well to keep the ball out.

23:50 IST: Luis Suarez brought down, Uruguay free-kick from their own half. 19 minutes on the clock.

23:47 IST: Portugal on the attack, through Adrian and Bernardo Silva on the right flank, plays the ball back to Mario, who plays a long ball to find Ronaldo but the heavy touch has been comfortably collected by Muslera.

23:43 IST: Cristiano Ronaldo makes space for himself, takes shot from outside the box. Well blocked by Torreira.

23:41 IST: Fonte gets a header from inside the box, but puts his wide. 11 minutes on the clock in the high-octane drama.

23:37 IST: GOAL! Edinson Cavani unmarked inside the box, puts Uruguay front through a devastating header in the seventh minute off a Luis Suarez cross, well targeted.

23:36 IST: Cristiano Ronaldo gets the first shot on goal from outside the box but too easy for Fernando Muslera to gather.

23:34 IST: Corner for Uruguay as Jose Fonte tucks the ball away. Uruguay finds Godin as target-man inside the box, but a header from Portuguese defence clears away the danger.

23:31 IST: Joao Mario crosses the ball into the box, Bernardo Silva just heads it over the crossbar. Early attack from Portugal.

23:30 IST: Kick-off! Cristiano Ronaldo kicks the ball from left to right as the match gets underway.

23:28 IST: Diego Godin and Cristiano Ronaldo exchange team sheets, we are minutes away from the kick-off. We have already seen France through to the quarters, knocking Argentina out.

22:20 IST: The playing XI for Uruguay and Portugal has been announced. Skipper Diego Godin for Uruguay will aim to keep his counter-part captain and talisman Cristiano Ronaldo at bay.

We'll shortly discover who will be playing #FRA in the #WorldCup quarter-finals...

21:30 IST: Hello and welcome to the live commentary from the Round of 16 clash between Uruguay and Portugal.

Ronaldo, a five-time Ballon d'Or winner, though has already scored four times at this World Cup, including a hat-trick on his last visit here when Portugal drew 3-3 with Spain. That means he has 85 international goals, more than any other male European player in history.

In the last two years, he has scored two hat-tricks for Real against Godin's Atletico, having also emerged victorious in two Madrid derby Champions League finals.

But the rugged and brave Godin, who needed reconstructive dental surgery after having three teeth punched out in an aerial challenge with Valencia's goalkeeper earlier this year, has succeeded in muzzling Ronaldo on plenty other occasions at club level going back almost a decade.

Luis Suarez 2018 FIFA World Cup Football Live Score Live Blogs Uruguay vs Portugal, Round of 16 Football
Get the latest Cricket news, check out the India cricket schedule, Cricket live score . Like us on Facebook or follow us on Twitter for more sports updates. You can also download the NDTV Cricket app for Android or iOS.