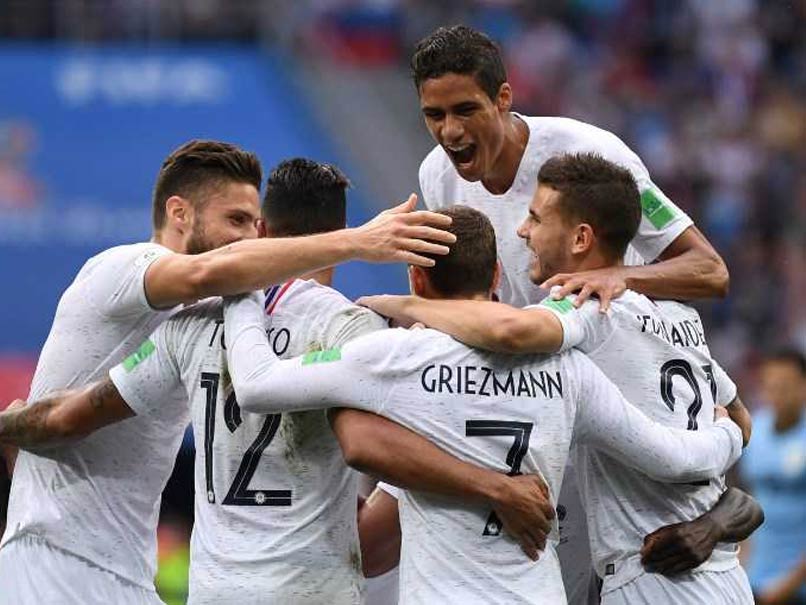 France outclassed Uruguay 2-0 to enter the semi-finals of the FIFA World Cup 2018 at the Nizhny Novgorod Stadium in on Friday. Raphael Varane and Antoinne Griezmann scored the two goals as France reached their sixth semi-final at the World Cup. A Fernando Muslera howler in the 61st minute handed France a 2-0 lead in the second half of the quarter-final clash. Griezmann hit a powerful shot headed straight to Muslera but he failed to collect it cleanly and the ball ended up at the back of the net. Raphael Varane had earlier scored with a clinical header in the 40th minute to give France a 1-0 lead over Uruguay at the end of the first half. The first half didn't see any clear-cut chances for either teams. Nahitan Nandez had a chance for Uruguay from close range. Uruguay were the better team in the first quarter but they hardly troubled French goalkeeper Hugo Lloris. Kylian Mbappe had a few good chances for France in the first half but he couldn't convert them. He had a glorious chance in the 20th minute when his header from six-yards out went way over the goal post. After initial pressure from Uruguay, France got hold of the proceedings and started to dictate the play. Mbappe exposed the Uruguay defence again in the 34th minute after outrunning Diego Laxalt in the right wing but his ball went past everyone. Lucas Torreira was alive to the danger then and cleared it. The goal that came off Antoine Griezmann's cross that found Varane in the box. Varane glanced his header out of Fernando Muslera's reach and gave France the lead. Martin Caceres had a chance to equalise after Varane's goal but the French goal keeper stretched to his extreme right to thwart the ball out for a Uruguay corner.(Highlights: Uruguay vs France)

21:24 IST: FULL-TIME! And its over. France beat Uruguay 2-0 to reach the semi-finals of the 2018 FIFA World Cup. The French now lie in wait in the semis for the winner of the other quarter-final between Belgium and Brazil.

21:10 IST: Final 8 minutes to go. It seems France are headed to the semi-finals at Uruguay's expense. | Uruguay 0-2 France after 94 minutes

21:05 IST: Substitution!N'Zonzi is getting ready to come on for France.Tolisso makes way.

20:57 IST: YELLOW CARD!Mbappe and Uruguay's Rodriguez get booked. There is chaos out there. Mbappe does a bit of trickery to infuriate the Uruguay players.| Uruguay 0-2 France after 68 minutes

20:51 IST:Uruguay have a mountain to climb now.

20:50 IST: GOAL! Muslera spills it and Griezmann gets France a two-goal lead in the 61st minute. He wanted to parry it but it goes straight into his goal. Paul Pogba orchestrated the attack winning the ball right from Vecino in the middle of the park. His presence of mind and a pin point pass to Griezmann gave France a two-goal cushion. | Uruguay 0-2 France after 62 minutes

20:45 IST: France are on the attack but the Uruguay defence are holding the back line well. | Uruguay 0-1 France after 55 minutes

20:40 IST: CORNER!Mbappe can't get through but wins the corner in the 52nd minute.

20:37 IST:France win a free-kick, wide on the right. Griezmann swings the ball into the Uruguay penalty area, but it's too close to Fernando Muslera who takes it easily.

20:14 IST: CHANCE!Martin Caceres at the end of the free kick and super save by Hugo Lloris to deny Uruguay the equaliser in the 43rd minute.

20:11 IST: GOAL!Antoine Griezmann whips a beautiful cross and Varane heads it to the far corner in the 40th minute. A thumping header and France lead Uruguay 1-0 after 41 minutes.

20:09 IST: Rodrigo Bentancur gets a yellow card for a rash challenge on Tolisso. | Uruguay 0-0 France after 40 minutes

20:05 IST:34 minutes gone and Mbappe shows his speed and gets past Laxalt in the right wing but no one in the six-yard box to trouble the Uruguay keeper.

20:00 IST: Corentin Tolisso clears the Uruguayn danger. It is still goalless after 30 minutes.

20:00 IST: Diego Laxalt stood like a rock there. Corner for France though. Easily cleared by the Uruguayn defence.

19:54:Pavard and Suarez collide. The latter seems to be hurt. The play is briefly halted.| Uruguay 0-0 France after 24 minutes

19:50 IST:No clear-cut chances for either teams. Both are attacking well and trying to keep the ball more.

19:50 IST:Paul Pogba gets little bit of room and shoots it. However the ball is over hit and it goes to the stands.| Uruguay 0-0 France after 19 minutes

19:45 IST:Chance! France'Mbappe had a lot of room and he hits it over the bar. Uruguay survive the scare.

19:45 IST: CORNER!First one. Uruguay are keeping the pressure up on France in the early quarter. Lloris gets to the ball ahead of Stuani. | Uruguay 0-0 France after 15 minutes

19:40 IST:Lucas Hernandez was brought down and France have a free-kick. Uruguay have everybody back. Nothing to trouble the Uruguay keeper. Final touch coming from Raphael Varane.| Uruguay 0-0 France after 11 minutes

19:35 IST: Nahitan Nandez had a chance out there from close range. Uruguay are keeping pressure on France. Great start from Uruguay in the early five minutes.

19:31 IST:Both teams have scored 7 goals each in reaching to the quarter-finals.

19:27:Uruguay look to reach the quarter-finals for a second time in three World Cups.

19:25 IST:The players are out in the middle and their respective National Anthems are being played.

19:20 IST:Five players (one Uruguayan, four French) would miss a semi-final for their respective teams if they were booked - and if their side were to reach the final four!

19:20 IST: TRIVIA!France have been knocked out by the eventual champions in each of their last five appearances in the knockout rounds of major tournaments.

19:12 IST:Here's the team formations of both Uruguay and France.

18:50 IST:Striker Edinson Cavani has been ruled out of Uruguay's World Cup quarter-final tie against France

18:10 IST: TRIVIA!France are unbeaten in nine World Cup games against South American opposition, since they were defeated 2-1 by hosts Argentina in 1978.

17:50 IST:Hello and welcome to the first quarter-final match between Uruguay and France straight from the Nizhny Novgorod Stadium.

While Uruguay sweat on the fitness of striker Cavani, it should be remembered that La Celeste's progress in Russia has been built upon their defence as much as their A-list attack. While France pin their hopes on Mbappe, it is unlikely that the teenage superstar has encountered a defence quite like Uruguay's. Led by captain Diego Godin, and including Jose Gimenez, Martin Caceres and Diego Laxalt, along with goalkeeper Fernando Muslera, Uruguay's defence have the joint-best record at the FIFA World Cup 2018.

France 2018 FIFA World Cup Football Live Score Uruguay vs France, Quarter-Final 1 Live Blogs Football
Get the latest updates on ICC T20 Worldcup 2022 and CWG 2022 check out the Schedule, Live Score and Medals Tally. Like us on Facebook or follow us on Twitter for more sports updates. You can also download the NDTV Cricket app for Android or iOS.