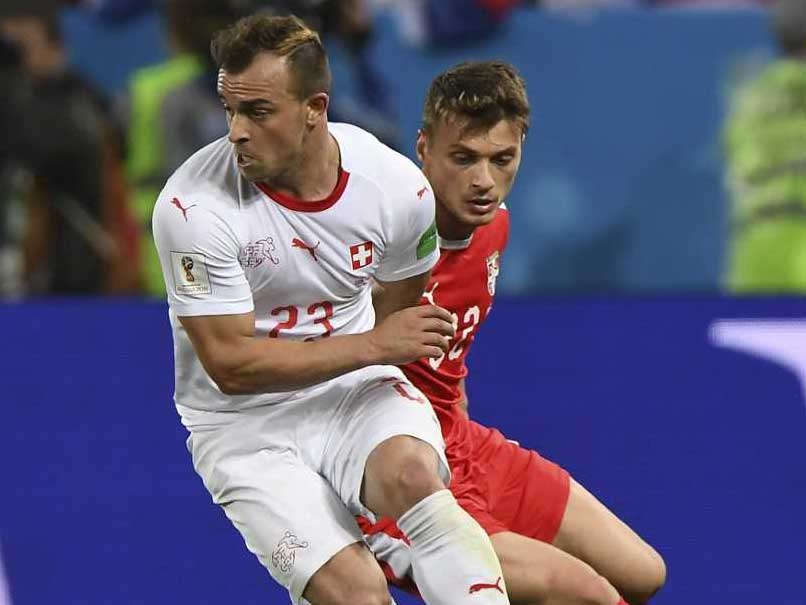 A last-minute Xherdan Shaqiri breakaway goal handed Switzerland victory Friday as they came from behind to defeat Serbia 2-1 in Kaliningrad. The win puts Switzerland in pole position to make it out of a tough Group E that contains five-times winners Brazil but they were pushed all the way by the Serbs. It was a sweet victory for Shaqiri and fellow Swiss goalscorer Granit Xhaka, who along with team-mate Valon Belrami were booed relentlessly by Serbia's fans throughout. Shaqiri, Xhaka and Belrami trace their roots to Kosovo, a former province of Serbia, a fact which had stoked tensions before the match. Both Shaqiri and Xhaka pointedly celebrated their goals by making an eagle gesture with their hands, viewed as a symbol of defiance. (Highlights: Serbia vs Switzerland).

01:23 IST: Final Whistle! Switzerland pip Serbia 2-1 to become the first nation in the FIFA World Cup 2018 to come from behind and register a victory! That's all we have for you tonight, until next time, its goodbye!

01:20 IST: 4 minutes added!Serbia will be disappointed with their performance after having started on the front and then conceded twice in either half, the Serbs would have also qualified for the last 16 if they could have see this through!

00:18 IST: GOAL! Shaqiri scores the 21st goal for Switzerland,as they take lead in the 90th minute through a brilliant through ball which did well to find him. Shaqiri went on one on one with the Serb defender to finish it past Stojkovic in the back of the net.

01:12 IST: Free-kick for Switzerland,dead ball specialist Rodriguez on the  ball, gets a touch of the wall, goes for a Swiss corner.

01:09 IST: Ivanovicconcedes a corner, puts his past his own goalkeeper in a haze, could have well end up as an own goal. 82 minutes up, we are still tied.

01:04 IST: Shaqiri on the break,looking to counter, the Swiss are two on three with the Serbs but in the end Xhaka clears it off for a throw-in.

00:58 IST: Mocked up play,Serbians holding up the ball in the back-line, not doing enough with the ball to pass it forward. We have approached the 71st minute.

00:45 IST: Hits the post! Shaqiri,twists and turns on the right flank to hit the ball hard which steams in to hit the post, looked like a cross at first but that some some shot!

00:40 IST: Equaliser!Granit Xhaka scores a blinder, out the box as the ball falls for him on the re-bound after the first Swiss shot was blocked in the 52nd minute. Game on!

00:39 IST: Corner for Serbia,Tadic swings it in, Mitrovic does well to rise high but the ball goes off the post.

00:35 IST: Switzerland have raised their tempo,on the attack, Dzemaili passes it to Zuber but he fails to get his footing right, loses possession.

00:33 IST: Second-halfgets underway, the official attendance today at Kaliningrad is 33,167.

Serbia, as it stands, are 45 minutes away from the knock-outs!#SRBSUI pic.twitter.com/poXYkU8R5j

00:16 IST: Half-time,courtesy of an early header from Mitrovic, Serbia keeps a slender first-half lead. Switzerland returned to press hard and make an impact on the game, but they failed to get the penetration right. As it stands, the Serbs lead 1-0 to Switzerland.

00:12 IST: Ivanovic witha long throw-in inside the box, but the ball which falls for Mitrovic is headed just high in the 42nd minute.

00:09 IST: Yellow card for Milivojevicfor a rash tackle on Shaqiri in the 39th minute.

00:06 IST: Free-kick for Serbia, from a promising position!Kolarov delivers and the header which was cleared away by the Swiss defence falls in space for Tadic, who takes a shot, straight into the arms of Sommer.

00:04 IST: Shaqiriwith a cross tries to locate his team-mate in the far corner but the goalkeeper comes in way to sweep up the ball with ease.

00:00 IST: The Swiss suddenly looking to mount pressure, Zuber came close from a header, but could not find the back of the net. 32 minutes up!

Mitrovic scores for Serbia and that equals the record for consecutive games at a World Cup without a goalless draw. 26 games, the same as in Switzerland in 1954 when every single game had a goal. Just knockout in those days.

23:56 IST: Swiss corner,taken by Rodriguez which falls in space for Akanji but his powerless header is straight into the arms of Stojkovic.

23:52 IST: 22 minutes into the game,the Swiss are trying to build in the game, exchanging one-to-one passes, but failing to find a penetration as Shaqiri's shot from the edge of the box is blocked.

23:45 IST: Kolarav on an awful long run,gathers pace to run past the Swiss defenders, his cross finds Mitrovic in space, but the goalscorer fails to do much with the ball.

23:40 IST: Chance for Switzerland,but Dzemaili who was well in position to put in the net from a close range, kicks the ball wide in the 10th minute.

23:38 IST: Corner for Switzerland, Xhaqiri takes,the ball on the re-bound returns back to him as he hit it hard but the ball hits his team-mate to be later easily cleared away by the Serbian defence.

23:35 IST: Mitrovic scores! Serbia takes lead in the 5th minute,Tadic provides a cheeky cross and Mitrovic, who was left unmarked puts it past Sommer.

23:32 IST: Early penalty appeal by Serbiaas Mitrovic has been brought down inside the box by Behrami in the second minute.

22:50 IST: Here is how both Serbia and Switzerland have lined-up for the crucial encounter.

21:30 IST: Hello and welcome to the live commentaryfrom the crucial Group E fixture between Serbia and Switzerland.

But their rising star is Lazio's Sergej Milinkovic-Savic, a rangy attacking midfielder who has drawn comparisons to Serbian great Dejan Stankovic.

Former coach Slavoljub Muslin, who led the team to qualification for Russia, reportedly paid with his job for failing to select Milinkovic-Savic.

It's not a mistake current coach Mladen Krstajic intends to repeat and the Lazio man -- who has reportedly attracted the interest of Real Madrid -- was lively against Costa Rica.

Switzerland 2018 FIFA World Cup Serbia vs Switzerland, Match 26 Live Blogs Football Live Score Football
Get the latest updates on ICC T20 Worldcup 2022, check out the Schedule and Live Score. Like us on Facebook or follow us on Twitter for more sports updates. You can also download the NDTV Cricket app for Android or iOS.