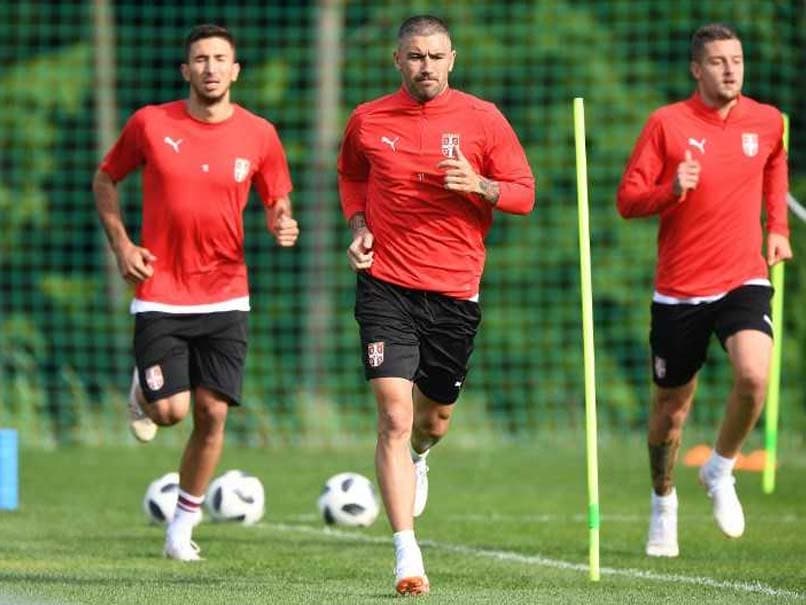 Serbia will attempt to wrap up qualification to the World Cup knockout rounds.© AFP

Serbia will attempt to wrap up qualification to the World Cup knockout rounds on Friday as they take on a Switzerland team brimming with confidence after grabbing a draw with Brazil. The Serbs control their own destiny in Group E after an opening 1-0 win against Costa Rica on Sunday, which came courtesy of a stunning Aleksandar Kolarov free-kick. Victory over Switzerland in Kaliningrad on Friday would guarantee Serbia a place in the last 16, regardless of whether they win or lose their final group game with Brazil next week. Roma star Kolarov acknowledged that Serbia are in a strong position to qualify for the knockout rounds for the first time since they competed alongside Montenegro in 1998. However, the 32-year-old cautioned that the Serbs would take nothing for granted against the Swiss.

"It's very important that we have these three points in the bag, but it's not over, Switzerland will be the hardest match," he said.

"I don't want to do the maths for now, if we draw it would not work, we want to win of course."

But their rising star is Lazio's Sergej Milinkovic-Savic, a rangy attacking midfielder who has drawn comparisons to Serbian great Dejan Stankovic.

Former coach Slavoljub Muslin, who led the team to qualification for Russia, reportedly paid with his job for failing to select Milinkovic-Savic.

It's not a mistake current coach Mladen Krstajic intends to repeat and the Lazio man -- who has reportedly attracted the interest of Real Madrid -- was lively against Costa Rica.

"It's not just him, lots of their players play for big clubs, but we also have good players."

Switzerland were ranked above France and Spainn in sixth place before the tournament and battled hard for a point against a Brazil side led by Neymar in their opener.

"It was very good teamwork on the right side. It was almost a perfect game. It's important to have this teamwork," said Arsenal-bound captain Stephan Lichtsteiner.

Serbia have based themselves in Kaliningrad -- Russia's European territory on the Baltic Sea -- throughout their stay in the tournament and tens of thousands of their countrymen are expected to travel for the game.

One sub-plot to watch for could be the Serbian fans' treatment of Switzerland's three Kosovan-born players.

Midfielders Valon Behrami of Italian club Udinese, Arsenal's Granit Xhaka and Xherdan Shaqiri of Stoke City were all born in Kosovo and all three played in the Brazil game.

Kosovo was a former province of Serbia, and Serbian fans gathered in Kaliningrad Tuesday night to celebrate Russia's 3-1 over Egypt while chanting "Kosovo is Serbia."

Switzerland Nemanja Matic 2018 FIFA World Cup Football Serbia vs Switzerland, Match 26
Get the latest updates on SA vs IND 2021-22, check out the Schedule and Live Score . Like us on Facebook or follow us on Twitter for more sports updates. You can also download the NDTV Cricket app for Android or iOS.