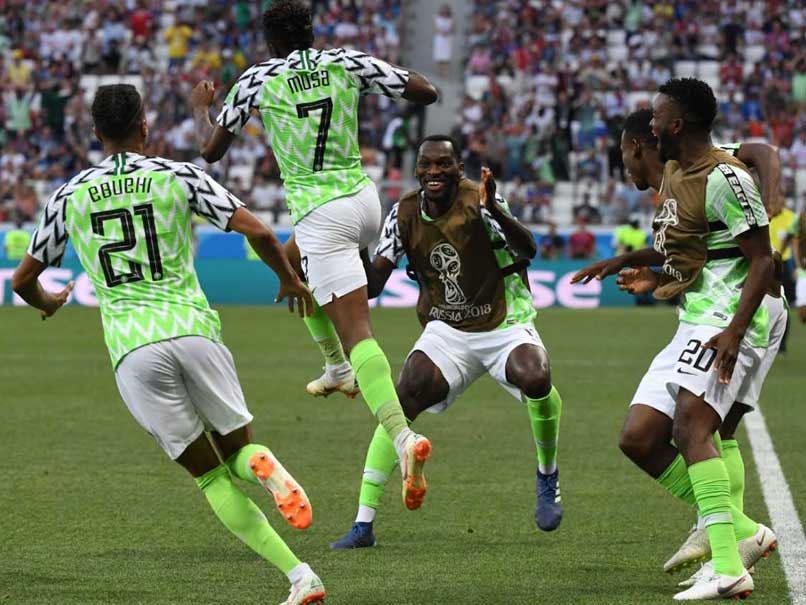 Ahmed Musa scored a brace as Nigeria beat Iceland 2-0 in their Group D match at the Volgograd Arena on Friday. After a dull first half, the match opened up in the second half especially when Musa slotted home in the 49th minute. A fantastic counter-attack after an Iceland corner saw Nigeria take the lead. Victor Moses put in a brilliant cross that was finished perfectly by Musa. The Nigerian frontman added his second in the 75th minute after a fine individual effort, running circles around the Iceland defence. Gylfi Sigurdsson missed a golden chance to put Nigeria under pressure, putting his spot-kick over the bar in the 83rd minute. His miss summed up the frustrating night for Iceland. After a strong first ten minutes, Nigeria and Iceland went into the halftime locked at 0-0. Iceland stormed the Nigeria half for the opening ten minutes and made Nigeria do the hardwork. After that, the match hardly saw any chances for either teams as both took a defensive approach going into the halftime. Both the teams tried to boss their respective midfield region. Nigeria enjoyed more possession but there were hardly any attacking threat from the African nation. Iceland kept defending in numbers and kept passing the ball around. (Highlights: Nigeria vs Iceland)

22:31 IST:Thank you for staying with us.You may catch the live blog updates of the next match between Serbia and Switzerland here.

22:25 IST: Nigeria beat Iceland 2-0 to register their first win of the tournament in Group D.

Final round of fixtures:#NGA vs #ARG #ISL vs #CRO #WorldCup pic.twitter.com/vtf4k3h56S

22:13 IST:Final five minutes to go for this match to get over.

22:08 IST: PENALTY for Icelandafter VAR referral. Gylfi Sigurdsson to take it and he misses it. What an awful penalty. Ball goes over the bar. Sheer frustration for Iceland. Nigeria can sense a win over here now. | Nigeria 1-0 Iceland after 83 minutes

22:02 IST: GOAL! This is Ahmed Musa's day. Nigeria make it two as they head towards a win. A wonderful finish in the end for the Nigerian striker. Awful defending by Iceland. The second half belonged to Nigeria. | Nigeria 1-0 Iceland after 78 minutes

21:58 IST: CORNER for Nigeria.Easily dealt by the Iceland defence.

21:46 IST: SAVE!Ndidi hits that shot with a venom. Well saved by the Iceland keeper. Nigeria are running riot at the moment.

21:44 IST:This match has opened up after the first goal. This pace was certainly missing in the first half. | Nigeria 1-0 Iceland after 56 minutes

21:15 IST: CHANCE!Alfred Finnbogason gets the closest to score for Iceland. Superb delivery by Sigurdsson. Two minutes added time at the end of first half.

21:14 IST:Barring the opening ten minutes, both the goalkeepers appeared to be mere spectators with nothing much to do.

21:13 IST:We are approaching the end of first half with 3 minutes to go.

21:08 IST:Throw-in for Nigeria! Safely cleared by the Iceland defenders.

21:02 IST:This match is devoid of any excitement after half-an-hour of play. Nogeria have made more passes so far in comparison to Iceland but to no | Nigeria 0-0 Iceland after 32 minutes

20:56 IST:Nigeria managing to apply pressure to the Iceland defence for the first time. Moses on the right side and Idowu on the left try to find spaces in the boxes for their strikers Musa and Kelechi Iheanacho. | Nigeria 0-0 Iceland after 26 minutes

20:50 IST:Nigeria are just passing the ball inside its own half. This game has slowed up a bit after initial excitement. | Nigeria 0-0 Iceland after 20 minutes

20:46 IST:Nigeria and Iceland trying to keep the ball and trying to play from the back. Iceland have more possession but Nigeria keeping pressure on them off the ball.

20:40 IST:After initial attacking threat from Iceland, both teams are now trying to stitch together passes. | Nigeria 0-0 Iceland after 11 minutes

20:37 IST:Gylfi Sigurdsson shoots from distance in the 5th minute but it is comfortable for the Nigerian keeper. Easy pickings for him.

20:34 IST: FREE KICK to Iceland!Gylfi Sigurdsson steps up to take it. It is his distance. First big test for the Nigerian keeper. On target but the keeper saves it. Goes for a corner. Early pressure from Iceland. Straight to the keeper Francis Uzoho. | Nigeria 0-0 Iceland after 4 minutes

20:27 IST: Iceland start Bodvarsson and Gislason instead of Hallfredsson and Gudmundsson, switch to 4-4-2

20:24 IST:Both teams are out in the middle as their respective National Anthems are being played.

19:32 IST:We now shift our focus on the Nigeria and Iceland match.

It's the late, late show in Saint Petersburg, but it is a victory for Brazil!#BRACRC pic.twitter.com/EUt8Sc1FOa

18:52 IST:You may catch the live match updates of the first match between Brazil and Costa Rica that is underway.Catch the live blog here

18:50 IST:Hello and welcome to the live match updates of the Group D match between Nigeria and Iceland.

Nigeria coach Gernot Rohr shook up his forward line on Friday for the clash against Iceland in Volgograd, bringing in Ahmed Musa and Kelechi Iheanacho among three changes for a match in which defeat would see them eliminated. They replace Odion Ighalo and Alex Iwobi who were toothless up front in the 2-0 opening defeat by Croatia, while Kenneth Omeruo takes the place of Abdullahi Shehu in defence. Iceland coach Heimir Hallgrimsson switches his formation to a 4-4-2, from the 4-5-1 he used in the 1-1 draw with Argentina, with two changes to the starting line-up. Big striker Jon Bodvarsson comes in for Emil Hallfredsson and joins Alfred Finnbogason, who scored the equaliser against Argentina, in a two-pronged strike force. The other change is enforced with Rurik Gislason replacing Johann Berg Gudmundsson who injured his calf in the first match.

Iceland Nigeria vs Iceland, Match 25 2018 FIFA World Cup Football Live Score Live Blogs Football
Get the latest updates on ICC T20 Worldcup 2022, check out the Schedule and Live Score. Like us on Facebook or follow us on Twitter for more sports updates. You can also download the NDTV Cricket app for Android or iOS.