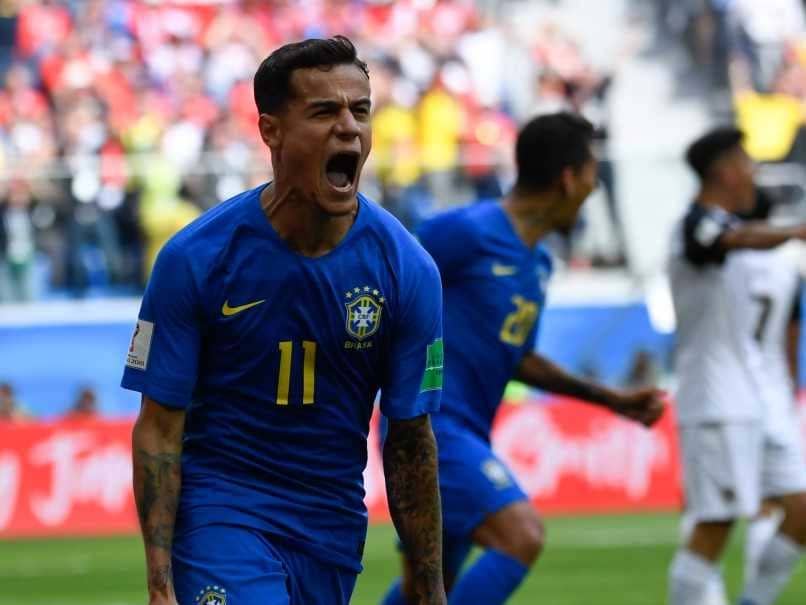 Brazil perseverance paid-off in the added time as they overcame a stubborn Costa Rica defence to defeat them 2-0 and register their first victory in the FIFA World Cup 2018 at the Saint Petersburg stadium on Friday. Brazil, thus went on top of Group E, with a victory and a draw. The Brazilians dominated possession in the first half but organized Costa Rica defense kept the former away from scoring as both teams were goal-less at the half-time in their second match of the tournament. The first half of the match was quite eventful with Brazilian attack breaching Costa Rican defense on multiple occasions but failed to net the ball. Meanwhile, Costa Rica, looked dangerous on the counter. On a couple of occasions, the team got into the Brazilian box but couldn’t make much of the opportunity. Sidelining injury woes,  Neymar featured in the playing Xi but looked rusty of the pitch. Solid defense from Costa Rica was the highlight in the first half against superstar Neymar-led Brazilian side. (Highlights: Brazil vs Costa Rica)

19:24 IST: 90+6 minutes! GOAL! Neymar gets his first World Cup 2018 goal! Brilliant cross from Silva and Neymar finishes it off with perfection.

19:20 IST: 90+3 minutes:That should have been another goal for Brazil and Coutinho but he MISSES!

19:04 IST: 77 minute! VAR in action! No foul no penalty!After initially pointing to the spot in favor of Brazil, referee has changed the decision.

18:58 IST: 71st minute! Neymar hides his face after the miss. It was Neymar vs the goal-keeper and the ball goes into the crowd from the left of the goal-post .

18:52 IST: 25 minutes to go! Brazil still struggling to score even after having 67 percent of the possession. Terrific defense from Costa Rica.

18:50 IST: 63 minutes!Brilliant attacking effort from Brazil. Neymar and Jesus are hassling the Costa Rica defense but just not able to find the net. Score still at 0-0.

18: 42 IST: 55th minute! That was the best opportunity of the match so far for Brazil but the captain misses this time. Neymar is furious with himself as he hits the ball over the goal-post.

18:36 IST: 50 minutes on the clock! Brazilian are looking really aggressive now! Neymar with a corner. Cleared!

18:34 IST: Opportunity missed! Neymar fails to score. Collision between Costa Rica goal-keeper and Neymar and he is down.

18;31 IST: Substitution for Brazil right at the start of second half! Willian is out Douglas Costa replaces him for Brazil.

Not too much to report on so far, to be honest. A tight affair at the Saint Petersburg Stadium. #BRACRC pic.twitter.com/yy6eBH20ud

18:14 IST: Off-side once again for Brazil. This time its Neymar.

18:10 IST: 5 minutes left!Brazil dominating possession but Costa Rica looking dangerous on the counter. Both seams are still goal-less as we approach half-time.

18:05 IST: 10 minutes left in the first half. Brazil have breached the Costa Rica defense on multiple occasions but have failed to score. It has been a brilliant display of defense from the latter. Score still 0-0.

18:03 IST: Willian with the curling kick but the ball ends-up Wide.

18:01 IST: Another off-side for Brazil. Second from Jesus.

18:00 IST: 30 minutes up! Brazil are looking more menacing now. They are continuously breaching Costa Rica defense but are just not able to find the net. Both teams still goal-less.

17:53 IST: Another free-kick from outside the box for Brazil. Cleared! by the Costa Rica defense.

17:46 IST: Free-kick taken by Marcelo. Cleared by the goal-keeper.

17:45 IST: 15 minutes are up. Costa Ricans are now looking confident. Two breaches in last two minutes inside Brazilian half.

17:38 IST: Free kick for Brazil from just outside the box. Neymar is all set. Cleared by the Costa Rican defense.

17:35 IST: Brazil have played quite aggressively in the opening minutes of the game. Majority possession has been with the Brazilians and the ball in the Costa Rican half.

17:33 IST: Coutinho with first shot of the match but the ball goes over.

17:32 IST:Brazil are just settling in with some passes in the middle of the park without any attacking intent.

17:24 IST:The teams are out on the pitch and their respective National Anthems are being played.

16:45 IST: Sidelining injury woes, Neymar is in the starting XI for Brazil against Costa Rica.

16:35 IST: Starting XI for both the teams announced.

The teams are in for the first match of the day! #WorldCup pic.twitter.com/OwQiIh2PY0

16:30 IST: Hello and welcome to the live blog of the Group E match between Brazil and Costa Rica straight from Saint Petersburg Stadium.

The Switzerland clash was his first competitive game for nearly four months after a broken bone in his right foot ended his club season with Paris Saint-Germain in February. To the frustration of many in the French capital, Neymar returned home for much of his recovery process with the intention of being fully fit for the World Cup. However, questions remain whether he is seriously lacking match practice. Brazil looked to their talisman time and again in the final stages in Rostov-on-Don, but he failed to find the final pass or finish to unlock a well-organised Switzerland defence. Instead, it was Philippe Coutinho who got Brazil's campaign off to a flying start with a wonderful long range strike to open the scoring. In contrast to Neymar, Coutinho ended the season in sensational form for Barcelona after sealing his dream move from Liverpool. Should Neymar not be fit, Coutinho could be moved into his role on the left of a front three with Tite bolstering his midfield.

However, Coutinho insists Neymar remains the key figure in Brazil's pursuit of World Cup glory. "Neymar is one of the best players in the world. Of course having him in our side is a big plus for us," said Coutinho. "He is so important. He is always creating the play, creating space." Brazil were not just unhappy with the treatment meted out to Neymar, but also Switzerland's equaliser when the Video Assistant Referee (VAR) system failed to rule out Steven Zuber's equaliser for a slight push on Miranda.

Costa Rica 2018 FIFA World Cup St. Petersburg Stadium Brazil vs Costa Rica, Match 24 Football Live Score Live Blogs
Get the latest updates on ICC T20 Worldcup 2022, check out the Schedule and Live Score. Like us on Facebook or follow us on Twitter for more sports updates. You can also download the NDTV Cricket app for Android or iOS.