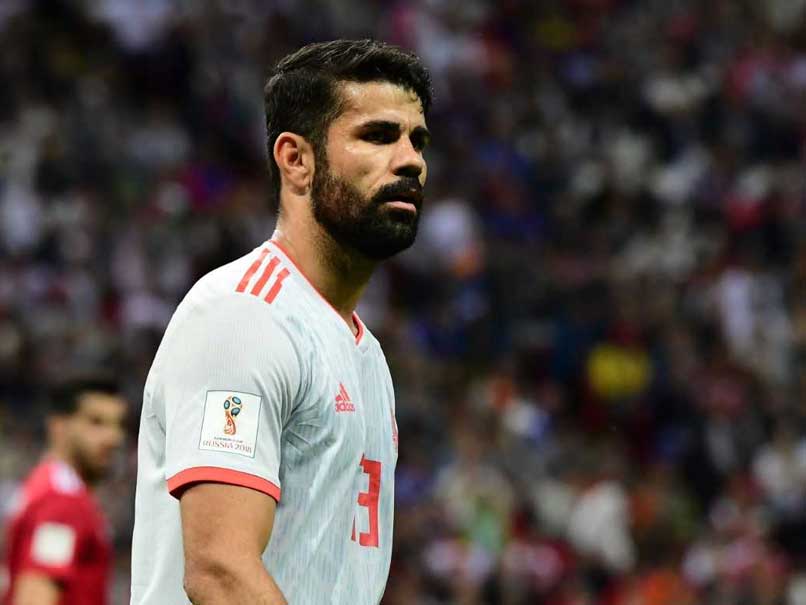 Diego Costa's 54th minute strike separated the two sides as Spain edged Iran 1-0 in a Group B match at the Kazan Arena to take a step closer to booking a Round of 16 berth. After multiple attacks in the first-half, Spain were left frustrated by a sturdy Iranian defence. However, shortly after the break, Diego Costa's goal that ricocheted off him gave Spain the lead they wanted. Following that, the speed of the game picked up as Iran desperately searched for an equaliser. Iran got a glimmer of hope in the 64th minute when Saeid Ezatolahi found the back of the net through David De Gea's leg off a free-kick. However, VAR showed that he was off-side and the goal was disallowed. A spirited Iran threw everything they could at Spain but the La Rojas held their calm and saw off the remaining minutes of the game. After this win, Spain and Portugal are placed first and second respectively with four points each, while Iran, on the other hand, are placed third with 3 points. (Highlights: Iran vs Spain)

All to play for in Group B for #POR #ESP and #IRN in the final round of fixtures... #WorldCup pic.twitter.com/75h32KvqE6

A tight day, but #POR #URU and #ESP all do what they need to do. #IRNESP pic.twitter.com/6cQ6xtuIyC

01:21 IST:Omid gets booked for a foul. Spain get yet another free-kick but Isco's shot does not bring any change to the scoresheet.

01:15 IST:Five minutes remaining in the game and Iran are throwing everything that they can. Iran make their final change, Saman Ghoddos replaces Amiri

01:10 IST: Trivia --Diego Costa is the first player to score in Spain's first two matches at a World Cup since this man, Fernando Torres, in 2006.

01:06 IST: 76th minute --Spain get a free-kick in a dangerous position. Isco takes the shot and is blocked by the wall.

00:55 IST:Spain get a corner. A very clever Isco rolls the ball to Silva at the Iranian near post and in turn, Silva passes the ball to Ramos, who drills the ball towards the goal. The shot is blocked by an Iranian defender, Pique lurking around, tried to free the ball off of Iran's defenders. A scrambling scene forced the referee to intervene. It was a literal depiction of bodies on the line.

00:52 IST: 64th minute --Iran get a free-kick and Ezatolahi finds the back of the net after the ball bobbled around near the post for few seconds. Spain opt for the VAR. Video replay shows that Ezatolahi was off-side. Iran's moment of joy was short lived. But Iran need to put this behind and focus on the job at hand -- to equalise.

00:44 IST: GOAL ! 54th minute --Diego Costa has put pain in lead with a fantastic goal. Silva makes a magnificent pass to Costa inside the D. Costa recevies the ball, turns and Ramin trying to defend, rebounded the ball off Costa past Beiranvand.| Iran 0-1 Spain

00:43 IST: 53rd minute --Iran get their first chance to score. Karim takes the shots but the ball lands on the other side of the net. De Gea was caught napping there.

00:40 IST: 50th minute --Iranian goalkeeper makes a brilliant save to deny Busquets and Vazquez a goal to their name. Spain finally break the Iranina defence line and Busquets shoots, the keeper mistimes his dive but manages to palm the ball away as he falls down. Vazquez was present near the keeper for a rebound but the ball is palmed away yet again. Top class save!

00:35 IST: Welcome back to the second-half. Iran get the ball rolling.

#ESP have had 71% of possession
#IRN can qualify with a win#IRNESP pic.twitter.com/qvNMIHzlvQ

00:16 IST: 45 min + 2 -- Spain comes closeyet again to take a lead in the game as Silva makes a run inside the box and takes his shot. Like every single time, this shot, too, is deflected away for a corner.

00:15 IST: 3 added minutes.Spain attacking and Iran defending. This has been the story of the first-half so far. Is there a change of plot lying in these three minutes?

00:13 IST:Last few minutes remaining for the first-half to come to an end and Spain are desperately trying to break the deadlock. The Iranian defence, on the other hand, is being tested by the formidable Spanish attack.

00:10 IST: Spain come close to take a lead in the game and is dneied by the Iranian defence. Silva makes a beautiful run in the D, swivels, shoots but the Iran defence is on their toes.

00:07 IST:It seems Safi has hurt himself as is lying inside the Spanish D. Medical personnel are attending him, he walks off the field for a brief moment and then walks back.

00:02 IST:Spain enjoy possession but they are failing to breach the resolute Iran defence after 32 minutes.

00:00 IST: Beautiful dribbling by Isco as he cuts in and shoots but the ball is miles away from the Iranian post.

23:56 IST: 25th minute --Spain, currently, are enjoying 78 percent of the possession. Iran finding it difficult to get the ball on the Spanish half.

23:52 IST: Another, another free-kick in Spain's favour.Iran continue to negate the Spanish attack but, in turn, are giving away free-kick in dangerous positions. Silva shoots but the ball comes off the wall and the keeper collects the ball with ease.

23:50 IST: Another free-kick for Spain. Ramos takes the shot but the ball ricochets off the defensive wall and the Iranian keeper collects the ball with ease.

23:48 IST:David Silva, down at the right flank, cuts back to the middle with the ball, shoots but finds the back of a Iranian defender.

23:42 IST:Spain get another free-kick. Silva swings the ball in, Ramos heads the ball back in play but Costa couldn't get hold of the ball as the Iranian defence clears the ball away.

23:40 IST: 10 minutes into the game and both teams are neck and neck in terms of attack and display of performance.

23:39 IST: Spain get a free-kick in a dangerous position. Silva curls the ball in and nobody in the box made a clean contact.

23:36 IST:Iran counter and was looking to pierce Spain's defence. But Carvajal intercepts Amiri and keeps the ball at bay. Iran get a free-kick. Safi curls the ball in and the Spanish defence heads the ball away.

23:33 IST: 3rd minute -- Carvajal fires in a long ball in the Iranian box and the keeper leaps in the air and punches it away. Diego Costa was just behind the keeper and waiting for any chance.

23:22 IST: Both teams are walking out of the tunnel for the national anthem as fans cheer on.

22:42 IST:Here are the formation for both the teams!

22:35 IST: Playing XI for Iran and Spain have been announced.

We have the Starting XIs for #IRN and #ESP #IRNESP pic.twitter.com/pZQvmZ0B3V

22:34 IST: Group A after two rounds of fixtures

And so, Group A after two rounds of fixtures...

22:32 IST:Meanwhile, Uruguay have qualified for the knockout stages by registering a 1-0 win against Saudi Arabia.

Congratulations to @Uruguay, who have qualified for the knock-out stages!#URU#WorldCup pic.twitter.com/LZpWa1ggVH

22:30 IST: Hello and Welcome to the live blog of the Group B match between Iran and Spain.

Iran's build-up to this tournament had not been smooth. Nike had blocked the players' supply of boots only four days before their opening game while further back, friendlies against Greece and Kosovo were cancelled. On the other hand, Spain coach Fernando Hierro confirmed that David De Gea will continue as goalkeeper against Iran, despite failing to stop Ronaldo from scoring a hat trick in their opening game.

IR Iran 2018 FIFA World Cup Football IR Iran vs Spain, Match 20 Live Blogs
Get the latest updates on India vs South Africa and check out  Schedule, Results and Live Score. Like us on Facebook or follow us on Twitter for more sports updates. You can also download the NDTV Cricket app for Android or iOS.