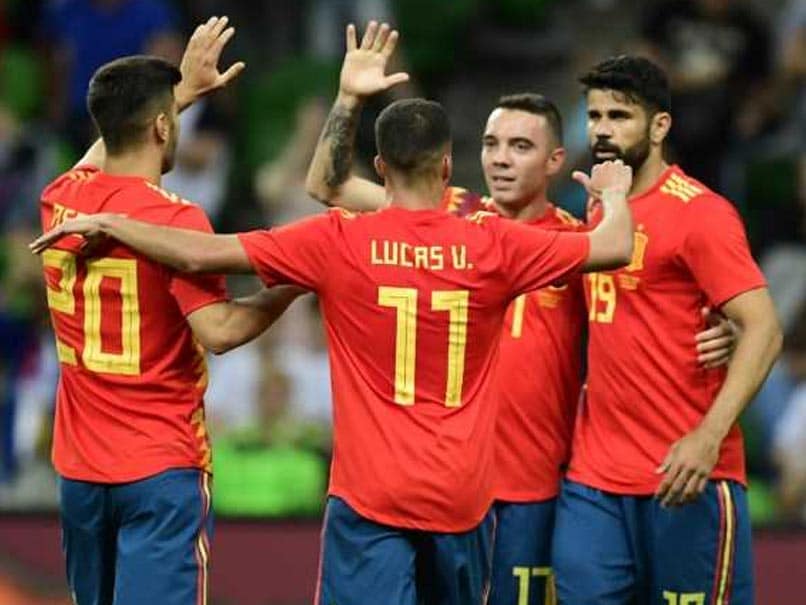 Iago Aspas celebrates with teammates after scoring for Spain vs Tunisia in a 2018 World Cup warm-up.© AFP

Spain laboured to a narrow 1-0 victory over Tunisia in an underwhelming FIFA World Cup warm-up in Krasnodar on Saturday. The 2010 champions remain unbeaten under coach Julen Lopetegui, who took over 20 matches ago after the Roja's elimination from Euro 2016 in the last 16 at the hands of Italy. Iago Aspas scored the only goal against fellow World Cup qualifiers Tunisia seven minutes from the end.

But Lopetegui's search for a consistent centre-forward was made no clearer despite a solid showing from Brazil-born Diego Costa.

The Atletico Madrid forward set up Aspas's winner and was a nuisance throughout for the Africans' defenders.

Tunisia Iago Aspas 2018 FIFA World Cup Football
Get the latest updates on ICC T20 Worldcup 2022, check out the Schedule and Live Score. Like us on Facebook or follow us on Twitter for more sports updates. You can also download the NDTV Cricket app for Android or iOS.