Captain Harry Kane and Gary Cahill netted in a dominant first-half display for England vs Nigeria at Wembley. 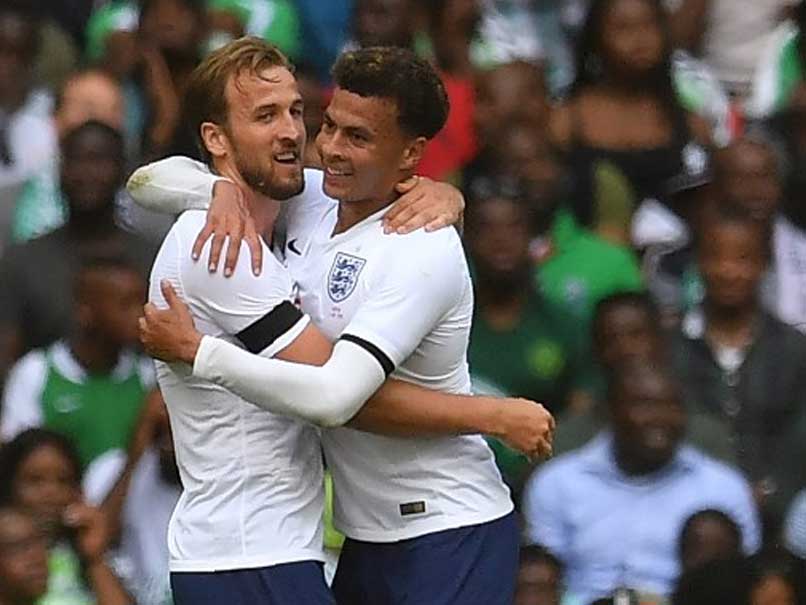 England kicked off their FIFA World Cup preparations with a 2-1 friendly win over Nigeria, but Raheem Sterling ended a troubled week on a low note as the Manchester City star was booked for diving. Gareth Southgate's side swept into a two-goal lead as Gary Cahill and captain Harry Kane netted in a dominant first-half display at Wembley on Saturday. But that encouraging opening was marred by a lethargic effort from England after the interval. Alex Iwobi reduced the deficit for Nigeria, who came close to equalising after exposing the flaws in Southgate's three-man defence by repeatedly attacking down the flanks.

Southgate still has time to work on those tactical issues as England have one more friendly -- against Costa Rica in Leeds on Thursday - before they fly to Russia for their Group G opener against Tunisia in Volgograd on June 18.

"The period leading up to their goal, they changed their system and we took some time to adjust.

"But after that we dealt with it well. It was a decent exercise for us to adjust to that."

But the England manager will also have to consider having another talk with Sterling after the City winger's latest controversy.

Speaking just before kick-off, Southgate admitted he had doubts about selecting Sterling after he arrived a day late for the start of England's training camp due to a flight mix-up as he returned from holiday.

Sterling had apologised to his team-mates after Southgate laid down the law -- but that wasn't his only issue since he joined up with England as the 23-year-old was forced to defend his new tattoo of an M16 assault rifle.

After flopping for England at Euro 2016, Sterling has a point to prove and his fine form in City's Premier League title-winning campaign was on display in his eye-catching first-half performance.

But Sterling couldn't stay out of trouble and was booked for an embarrassingly clear dive in a failed attempt to win a second-half penalty.

"I haven't looked at the incident but I thought he worked really hard for us and his counter-attacking was a real problem for the opposition," Southgate said of Sterling.

"I thought he was very bright and his movement caused problems. I was happy with his performance."

It was that kind of evening for Southgate, with pluses and negatives in equal measure.

Dele Alli was subjected to jeers from the large contingent of Nigeria supporters, who recalled his decision to snub their country in favour of representing England.

Alli, who has a Nigerian father, didn't seem perturbed and he was soon celebrating when England took a seventh-minute lead.

Kieran Trippier's precise corner picked out Cahill, who got between two Nigeria defenders to power his header past Francis Uzoho.

Following an inconsistent season with Tottenham and some diffident displays for England, Alli needed to cement his place in Southgate's team and, ignoring the hail of boos, he was making a convincing case.

Sterling was the creator when England doubled their lead in the 39th minute, his pass picking out Kane for a low 18-yard strike that crept under a woeful attempted save from Uzoho.

Everton goalkeeper Jordan Pickford, making only his third international appearance, hardly had a save to make in the first half.

But the 24-year-old was picking the ball out of the net three minutes into the second half as England's three-man central defence of Cahill, Kyle Walker and John Stones were exposed.

Odion Ighalo got free to shoot against a post and Arsenal winger Iwobi pounced on the loose ball to give Pickford no chance with a clinical finish.

Sterling's troubles weren't quite over and he was booked for his crude attempt to win a penalty when Uzoho came off his line to block the winger's run.

Nigeria Harry Kane Gary Cahill Raheem Sterling 2018 FIFA World Cup Football
Get the latest updates on ICC T20 Worldcup 2022 and CWG 2022 check out the Schedule, Live Score and Medals Tally. Like us on Facebook or follow us on Twitter for more sports updates. You can also download the NDTV Cricket app for Android or iOS.