Watch: England Football Stars Prepare For 2018 World Cup With A Game Of Kabaddi

England boss Gareth Southgate got his squad playing Kabaddi in their training session ahead of the FIFA World Cup. 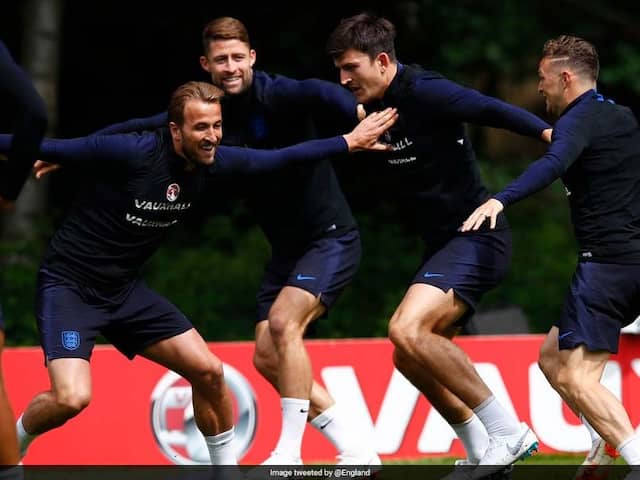 England footballers enjoy a game of Kabaddi during a training session ahead of FIFA World Cup.© Twitter

Playing football during training for cricketers is quite a common sight now. Virat Kohli, MS Dhoni and other Indian cricket stars are known football fans and rarely does a training session go by without a game of football. But what sport do footballers play to take their minds away from the game and have a little fun? England football stars, preparing for the FIFA World Cup in Russia, have called on the age old Indian sport of Kabaddi to mix things up during their training sessions.

Stars like Harry Kane, Danny Welbeck, Gary Cahill, Jesse Lingard, to name a few, were all seen enjoying some Kabaddi during a training session.

With the 2018 World Cup in Russia drawing ever closer, England manager Gareth Southgate has come up with an innovative way to keep things fresh in the England camp.

England are in Group G along with Tunisia, Belgium and Panama. There is little doubt that Belgium will pose the biggest threat to England in the group stages. The English start their 2018 World Cup campaign against Tunisia on June 18 in Volgograd.

The most notable inclusions in England's 23-man provisional squad see uncapped duo Trent Alexander-Arnold and Nick Pope named, while Chelsea's Ruben Loftus-Cheek, who spent the 2017/18 Premier League season on loan at Crystal Palace, also making the squad despite having never made a competitive appearance for the 'Three Lions'.

The most notable omission is the experienced Joe Hart, who had a challenging season at West Ham United, and was England's goalkeeper at the last three major tournaments: Euro 2012, 2014 World Cup in Brazil and Euro 2016.

Panama 2018 FIFA World Cup Football
Get the latest Cricket news, check out the India cricket schedule, Cricket live score . Like us on Facebook or follow us on Twitter for more sports updates. You can also download the NDTV Cricket app for Android or iOS.