Switzerland's Michael Lang was sent off in injury-time for a last-ditch push. 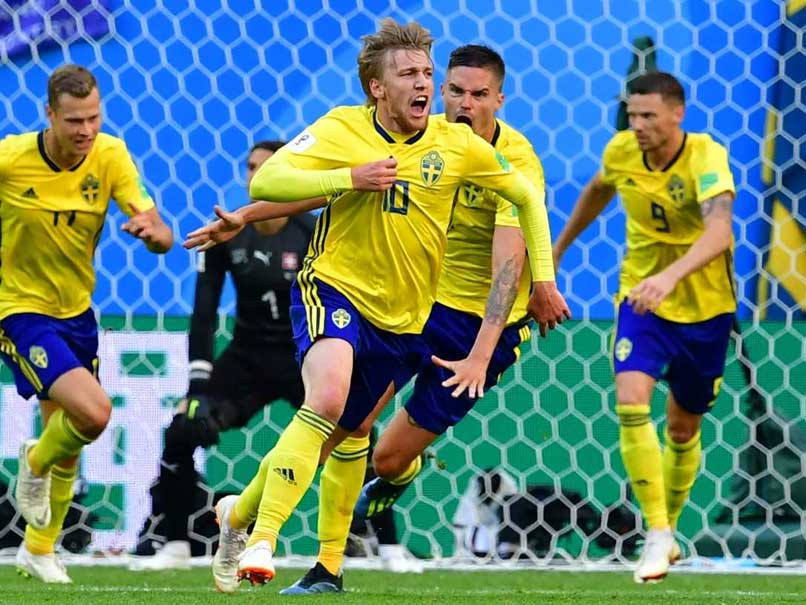 Sweden reached the World Cup quarter-finals for the first time in 24 years.© AFP

Sweden reached the World Cup quarter-finals for the first time in 24 years after Emil Forsberg's deflected shot earned a scrappy 1-0 win over Switzerland on Tuesday. This was far from a classic at the Saint Petersburg Stadium and if Colombia or England's players were watching on from Moscow, they could be forgiven for feeling bullish about their prospects in the last eight. Switzerland's Michael Lang was sent off in injury-time for a last-ditch push on Martin Olsson and referee Damir Skomina downgraded his penalty to a free-kick on the edge of the area. But the game was already up. Forsberg's second-half strike, which deflected off the unfortunate Manuel Akanji, means Sweden are through to the World Cup last eight for the first time since 1994 in the United States.

Their route to the quarters has not been easy and, what they have lost in the individual brilliance of Zlatan Ibrahimovic, they appear to have gained in grit, determination and collective spirit.

Their next opponents would be foolish to take them lightly.

The one blemish on the victory was a yellow card for defender Mikael Lustig, who will now be suspended for the quarter-final in Samara on Saturday.

Both sides had been hampered by suspensions here too, with Switzerland more badly affected. They were without both Fabian Schaer and captain Stephan Lichtsteiner at the back, prompting Johan Djourou and Lang to come in.

After back-to-back penalty shoot-outs, Brazil versus Mexico and Belgium's pulsating comeback against Japan, there was always a danger this last-16 tie would struggle to deliver, even on low expectations.

It was a contest that lacked quality, particularly in the final third, where both teams were often painfully imprecise.

Victor Lindelof slippedon the ball in the first 10 seconds and that set the tone for the first half, which was largely a collection of mishit passes, heavy touches and skewed shots.

There were chances and Sweden had most of them. Marcus Berg blasted over when set free early on and then saw his finish blocked following a poor clearance by Swiss goalkeeper Yann Sommer.

After a slow start, and Lustig's foul on Josip Drmic, Switzerland grew in confidence and should have scored when Blerim Dzemaili snatched at Steven Zuber's pull-back.

At the other end, Albin Ekdal was even closer, and completely free, when he sidefooted Lustig's cross over.

Rather than let loose, both teams tightened after the interval, and Forsberg's goal came out of the blue. With space on the edge of the box, his dummy did for Granit Xhaka before the shot was helped in by the outstretched foot of Akanji.

Switzerland twice went close to grabbing an equaliser, as Djourou's header dribbled agonisingly across the goal-line and substitute Haris Seferovic drew a late save from close range.

Olsson was pushed in the back by Lang with only Sommer to beat in injury-time, with Skomina initially awarding a penalty but changing his decision to a free-kick after he consulted the replay. Lang's red card stood and Sweden held on.

Sweden 2018 FIFA World Cup Sweden vs Switzerland, Round of 16 Football
Get the latest updates on ICC T20 Worldcup 2022, check out the Schedule and Live Score. Like us on Facebook or follow us on Twitter for more sports updates. You can also download the NDTV Cricket app for Android or iOS.