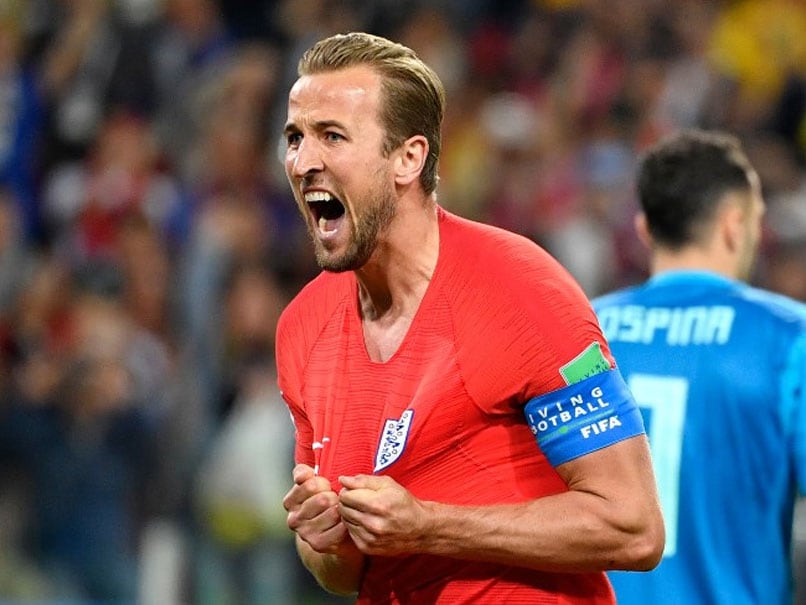 England edged Colombia 4-3 on penalties to halt a run of five successive shootout defeats at major tournaments and book a quarter-final clash against Sweden at the World Cup. Harry Kane fired England ahead with his tournament-leading sixth goal just before the hour in Moscow, converting a penalty after he was hauled down by Carlos Sanchez at a corner. Gareth Southgate's team looked to be heading into the last eight in regulation time until Yerry Mina equalised with a 93rd-minute header as the giant Colombian defender scored for the third game in a row. Neither team could find an advantage in extra-time and so a bad-tempered match went to a nailbiting penalty shootout.(Highlights: Colombia vs England)

02:26 IST: England beat Colombia on penalties to set up quarter-finals clash with Sweden.

02:09 IST:Full-time (ET): England 1-1 Colombia after full time of the 30 minutes of extra-time played,. We are headed into penalties now.

02:06 IST:Two minutes left in the second period of the extra-time. It seems we are headed towards a penalty shootout!

02:01 IST: Vardy receives a beautiful long ball, makes a runs down the right flank and his cross is cleared by the defence. England get a corner but nothing comes of it as Dier's header is miles off the target.

02:00 IST: England, dominating the ball possession in the second period of the extra-time, are failing to break the Colombian defence. We are slowly heading towards another penalty shootout.

01:55 IST:Both goalie's are being kept busy. Multiple attacks from both teams.

01:53 IST:The second period of the extra-time begins. England will have to pull up their socks as Colombia are knocking at their door.

01:43 IST:10 minutes into the extra-time -- England seem bit off balance while Colombia are looking dangerous.

01:34 IST:The first period of the extra-time gets underway. Colombia 1-1 England.

This tournament just never fails to amaze, does it? #COLENG // #WorldCup pic.twitter.com/pNbSDTj59Z

Another #WorldCup match, another last-minute goal to ruin our full-time graphic...#COL fans will not care about that, though!

A THIRD goal at this #WorldCup for Yerry Mina.

01:22 IST: Five minutes of added time! Can Colombia find an equaliser or will England hold on?

01:17 IST: Colombia have last five minutes and added time to find an equaliser if not a winner.

01:13 IST:Colombia just let their closest chance to find an equaliser fly away as Cuadrado shoots the ball wide of the target.

01:08 IST: 76th minute -- Raheem Sterling makes a run down the middle, passes a beautiful ball towards the right of the box, Lingard reaches the ball but is carefully tackled by a Colombian player. Lingard, who was brought down, is furious at the referee for not ruling penalty in their favour.

01:05 IST: 73rd minute --Harry Kane brought down, England get a free-kick. Young curls the ball in towards the far-post as it misses a jumping Kane.

01:04 IST:England get a corner. Ashley young's cross is send wide by Maguire's header. England appeal for another corner but the referee says it is not.

00:57 IST: 65th minute-- England get a free-kick yet again. It surely won't be late when the color of the card changes to red for the Colombian players.

00:54 IST: Falcao gets booked for a heated argument with the referee. The Colombians are losing their temper here. England have advantage.

Harry Kane is having the #WorldCup of a lifetime #COLENG 0-1 pic.twitter.com/9eWcc81Rll

00:44 IST: Harry Kane is brought down yet again. England get a free-kick. Ashley Young curls the ball in and it is headed away for a corner. Trippier takes the corner, Carlos Sanchez gets booked for pushing Kane in the box. ENGLAND GET A PENALTY!

00:37 IST:KICK-OFF! The second-half between Colombia vs England starts.

A fourth consecutive 0-0 half-time scoreline in the #WorldCup

00:16 IST:The first on target shot of Colombia by Quintero as the England goalie Pickford blocks the shot with ease.

00:14 IST:England have been persistent with the attacks while Colombia is finding it difficult to find their footing despite the few physical interactions.

00:10 IST: Tension is rising here at the Spartak Stadium.Wilmar Barrios get booked for jostling Henderson.

00:08 IST: 38th minute -- Harry Kane is brought down and England get a free-kick in prime position outside the box. Trippier curls the ball in and it is wide and off the target.

23:56 IST: England get a free-kick. Young curls the ball towards the far post. Maguire goes for the header as it ricochets off a Colombian player. England get a corner and it is cleared away by the Colombian defence.

23:53 IST:England have been solid in the back as Colombia are finding it difficult to penetrate the defence. On few occasions when they managed to penetrate, the ball was cleared with much ease.

23:45 IST: CLOSE!! Harry Kane came close to give his team a lead in the game. Trippier sprints down the right, collects a ball from Lingard and delivers a brilliant cross to the Colombian back post. Harry Kane, who was running towards the ball, leaps but could only manage the header up and above the crossbar.

An early chance for @HKane...

Will he score tonight? #COLENG 0-0 pic.twitter.com/6k1PnmVLGI

23:42 IST: Raheem Sterling shoots from just outside the box and the shot is blocked Davinson Sanchez. England have now increased their attacks.

23:39 IST:England get a corner. The corner is denied by the referee as John Stones is warned for pushing a Colombian player.

23:35 IST: Raheem Sterling makes a run down the left flank. He is tackled by Yerry Mina and referee awards a free-kick to England. Ashley Young curls the ball in and David Ospina punches the ball away. That was brilliant!!

23:30 IST:KICK-OFF! The Round of 16 Colombia vs England match begins at the Spartak Stadium.

22:45 IST:The starting XI for Colombia and England have been announced.

TEAM NEWS | The teams are in for #COL and #ENG#COLENG // #WorldCup pic.twitter.com/mGBizd89rl

22:40 IST:The teams have arrived at the Spartak Stadium.

The teams have arrived in Moscow!

Where are you watching #COLENG tonight?

22:30 IST: Hello and welcome to the live blog of the match between Colombia and England.

England striker Harry Kane was rested in the Belgium defeat but is still top of the goal-scoring charts in Russia, with five goals in two matches. Kane leads the race for the Golden Boot but was kept in reserve by Gareth Southgate for a 1-0 defeat to Belgium that meant the Three Lions finished second in Group G, to keep him fresh for England's last-16 clash with Colombia.

England 2018 FIFA World Cup Football Colombia vs England, Round of 16 FIFA Live Blogs
Get the latest updates on ICC T20 Worldcup 2022 and CWG 2022 check out the Schedule, Live Score and Medals Tally. Like us on Facebook or follow us on Twitter for more sports updates. You can also download the NDTV Cricket app for Android or iOS.