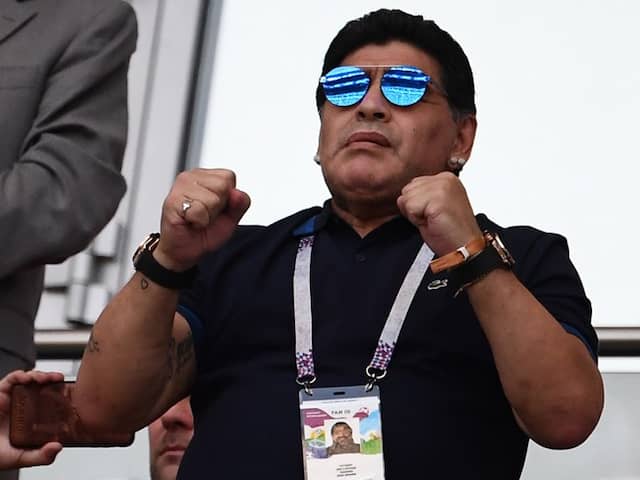 57-year-old Maradona has coached Argentina for two years before.© AFP

Argentina's World Cup campaign came to an early end as they got knocked out by France 4-3 in the Round of 16 on Saturday. Post the exit, critics went after skipper Lionel Messi and coach Jorge Sampaoli over the team's poor performance. With Jorge Sampaoli currently under tremendous pressure to resign following their World Cup travails, Diego Maradona has offered to return to the position of Argentina coach. Maradona has also asserted that he is willing to work for free with the national team. Speaking on his "Hand of God" television show, the 57-year-old Maradona, who coached Argentina for two years from 2008-10, said it was painful to see the current state of the national team.

"I would return to leading the national team and I would do it for free, I wouldn't ask for anything in return," Maradona said on his programme, which runs on Venezuelan channel Telesur.
Sampaoli is resisting intense pressure to resign following Argentina's 4-3 defeat to France on Saturday during a World Cup campaign that was fraught with tension and disputes.

The coach is believed to have lost the support of his players with some claims attributing team selection and tactics to captain and star Lionel Messi.

Sampaoli, though, has another four years to run on his contract, meaning the Argentine Football Association (AFA) would have to pay a reported 15 million US dollars (12.9 million euros) to sack him.

"Hopefully God will give me the strength to return to the bench," said Maradona, whose own World Cup coaching campaign in 2010 ended in an ignominious 4-0 thumping by Germany in the quarter-finals in South Africa.

"I'm 57, watching my country, which was beaten by a team that isn't one of the best in the world -- it really hurts to see everything that we've built destroyed so easily." Maradona was a genius as a player, leading Argentina to World Cup glory in 1986 and again to the final four years later.

But his coaching career has been far less glamorous despite his stint in charge of the national team, in which he presided over a record-equalling 6-1 defeat to Bolivia.
His last two jobs were in the United Arab Emirates, most recently failing to guide Fujairah to promotion from the Emirati second division last season.

Lionel Messi Kylian Mbappe 2018 FIFA World Cup France vs Argentina, Round of 16 Diego Maradona
Get the latest Cricket news, check out the India cricket schedule, Cricket live score . Like us on Facebook or follow us on Twitter for more sports updates. You can also download the NDTV Cricket app for Android or iOS.