France clinched their second World Cup after 1998 by beating maiden finalists Croatia 4-2 in a dramatic final at the Luzhniki Stadium in Moscow on Sunday. 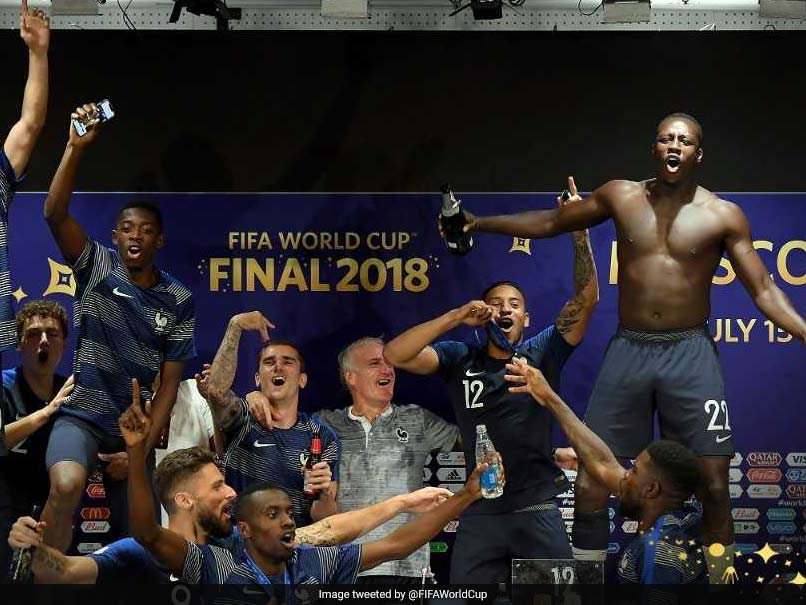 France clinched their second World Cup after 1998 by beating Croatia 4-2 in final.© Twitter

France clinched their second World Cup after 1998 by beating maiden finalists Croatia 4-2 in a dramatic final at the Luzhniki Stadium in Moscow on Sunday. An elated coach Deschamps said France were "swimming in happiness" after his players interrupted his post-World Cup final press conference, dancing and showering their manager in drinks as they celebrated their massive win in the summit clash. The coach was about to start speaking when the squad came into the room packed full of journalists, with defender Benjamin Mendy leading the celebrations as he danced with his shirt off. Deschamps then tried to compose himself to give his view on France's second World Cup triumph -- he was the captain of the team that won the trophy in 1998 by beating Brazil 3-0 in Paris.

Deschamps becomes just the third man to win the World Cup as a player and a coach, following in the footsteps of Brazil's Mario Zagallo and Germany's Franz Beckenbauer before him.

"My story is linked to that of the players. I had the immense privilege and happiness to experience that as a player 20 years ago, and it was in France as well so it will remain with me forever.

"But what they have done today is just as big and just as beautiful," said Deschamps.

His team took the lead through a Mario Mandzukic own goal, and then went back in front courtesy of an Antoine Griezmann penalty after Ivan Perisic had equalised for Croatia.

Paul Pogba and Kylian Mbappe both scored in the second half to put France out of sight, and they could even afford to see Mandzukic pull a second goal back for Croatia after an awful Hugo Lloris mistake.

"For the young kids today -- I have a boy who is 22 -- we were world champions but they were too young to understand it.

"But now the generation who are 10, 15 or 20 years old, to have experienced this, have this happiness... we will really realise tomorrow and in the days to come, what they have done."

The coach knows what the future will be like for this generation of World Cup winners, who will go down in history like the team of Deschamps and Zinedine Zidane two decades ago.

Croatia Luzhniki Stadium 2018 FIFA World Cup Football France vs Croatia, Final
Get the latest updates on ICC T20 Worldcup 2022, check out the Schedule and Live Score. Like us on Facebook or follow us on Twitter for more sports updates. You can also download the NDTV Cricket app for Android or iOS.