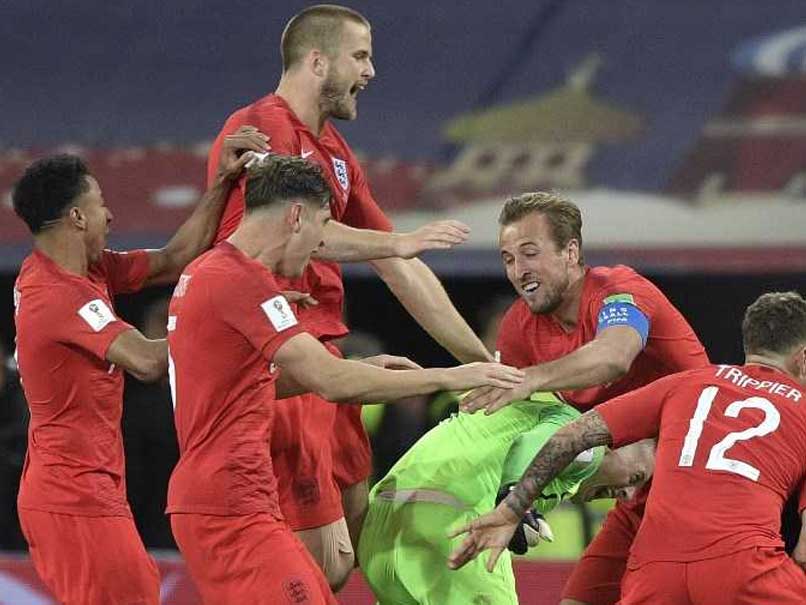 England ended their penalty hoodoo with a 4-3 shootout win over Colombia.© AFP

"Just Diernamite!" screamed the Sun after Eric Dier ended England's penalty hoodoo in Russia, slotting home the decisive spot-kick to beat Colombia and qualify for the World Cup 2018 quarter-finals. A bare-chested, grinning Dier was labelled the "Coolest Man in Moscow" by the Daily Mail, who added with a touch of hyperbole: "The explosion of relief must have been heard in space." The Daily Mirror hailed: "Justice as Lions win do-or-Dier shootout" following the 4-3 win on spot-kicks in Moscow. England goalkeeper Jordan Pickford earned rave reviews, with the Sun hailing the "Hand of Jord", harking back back to Diego Maradona's "Hand of God" incident in 1986, when the Argentine put the ball into the net with his hand.

The paper revels in being able to at last print: "It's the headline we have waited a lifetime to write... England win on penalties (Yes really!)".

Colombia are roundly panned for their behaviour, with England captain Harry Kane and his team complimented for their coolness in the face of intimidation.

Several former referees writing in the press said Wilmar Barrios should have been sent off rather than just booked for an apparent head butt on Jordan Henderson.

"Cheats did not prosper. They barged and butted our young Lions but we win battle of Moscow," said the Daily Mail.

The Mirror labelled them: "Snarling, cynical Colombians," while the Sun said: "Brute Force -- Kane 'n Co hold their own in street fight."

Looking ahead to Saturday's quarter-final with Sweden in Samara, the media do not appear to have heeded manager Gareth Southgate's claim that England have underestimated the Swedes for years.

"Sweden are like watching bad old England. There is... Nothing to Fear," trumpeted the Daily Mail.

The Sun believes the shine of beating Colombia will be well and truly taken off should they slip up against the Swedes.

"Fors is Strong... Swedes have no stars...Three Lions shouldn't make Emil of it," said the Sun, referring to goalscorer Emil Forsberg, whose strike earned a 1-0 win against Switzerland.

"If Gareth Southgate's team cannot take care of this lot in the quarter-finals, they probably should not bother coming home."

The Times, though, sees things rather differently and issues a warning: "Resolute Sweden a team to be reckoned with."

Sweden Jordan Pickford Eric Dier 2018 FIFA World Cup Colombia vs England, Round of 16 Football
Get the latest updates on ICC Women's Cricket World Cup 2022 and IPL 2022, check out the Schedule , Live Score and IPL Points Table. Like us on Facebook or follow us on Twitter for more sports updates. You can also download the NDTV Cricket app for Android or iOS.