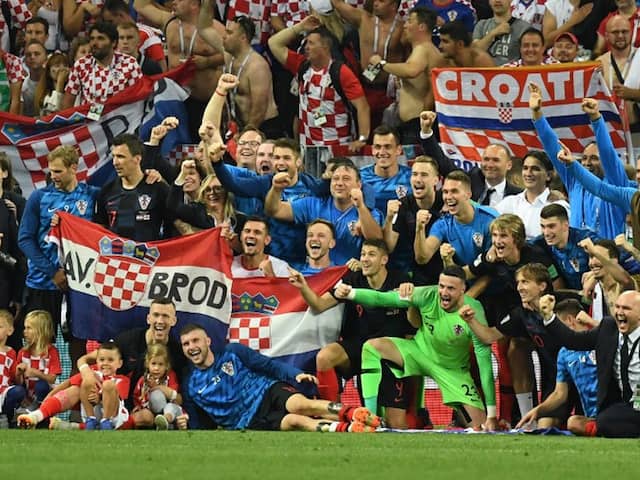 Croatia reached the World Cup final for the first time in their short history.© AFP

Croatia will take on France in their first World Cup final on Sunday at the Luzhniki Stadium in Moscow. Mario Mandzukic scored the winning goal deep in extra time as Croatia beat England 2-1 in an utterly gripping World Cup semi-final in Moscow on Wednesday to set up a final date with France. The Juventus forward netted in the 109th minute to complete a remarkable comeback from a shattered Croatian team and take the small nation of little more than four million people into the World Cup final for the first time in their short history. England had been the ones hoping to make history, in what was their first appearance in the semi-finals in 28 years but they eventually fell short.

Here's a lowdown on Croatia's route to their maiden World Cup final.

Croatia wanted to begin their World Cup campaign with a win and they did it with a disciplined performance against Nigeria. Oghenekaro Etebo's own goal in the first-half and skipper Luka Modric goal from the spot earned the Croatians their first three points.

Zlatko Dalic-coached Croatia were up against the mighty Argentina led by Lionel Messi. Argentina didn't live up to the hype and lost by a margin of 3 goals. The two-time champions fell to goals from Ante Rebic, Luka Modric and Ivan Rakitic propelling Croatia to take the top spot in their group securing the last 16 berth in the process.

Croatia came into this match after registering back-to-back wins and were afforded the luxury to rest their key players. Milan Badelj gave the Croatians the lead in the second half but his goal was cancelled out by Iceland's Gylfi Sigurdsson, who scored a penalty. Substitute Ivan Perisic hit the winning goal in the 90th minute and went to the Round of 16 with a 100 per cent record in the group stage.

The last 16 clash between these two nations got off to a flying start as Mathias Jorgensen scored in the first minute to give Denmark the lead. Mario Mandzukic levelled soon after in the 4th minute. Croatian skipper Modric missed a penalty in the extra-time. Goalkeeper Danijel Subasic was the hero of the match after he saved penalties from Christian Eriksen, Lasse Schone and Nicolai Jorgensen and guiding his team to the quarter-finals.

This was the second successive match for Croatia that went into extra-time and penalties. Denis Cheryshev's curler for Russia was cancelled out by Andrej Kramaric in the stipulated ninety minutes. Domagoj Vida put Croatia in front in the extra-time but Mario Fernandes' header in the dying minutes saw Russia level the score 2-2. Fedor Smolov's spot-kick was saved by Subasic and a miss by Fernandes in the shoot-out saw the hosts bow out of the tournament.

Croatia reached their first-ever World Cup final after they edged England 2-1 in extra-time in Moscow. Mandzukic scored the winning goal in the 109th minute of the semi-final, slotting in from Ivan Perisic's flick-on into the area. England were given the dream start through Kieran Trippier's 20-yard free-kick after only five minutes, but Perisic's 68th-minute equaliser sent the match into extra time.

Croatia 2018 FIFA World Cup Football France vs Croatia, Final
Get the latest Cricket news, check out the India cricket schedule, Cricket live score . Like us on Facebook or follow us on Twitter for more sports updates. You can also download the NDTV Cricket app for Android or iOS.