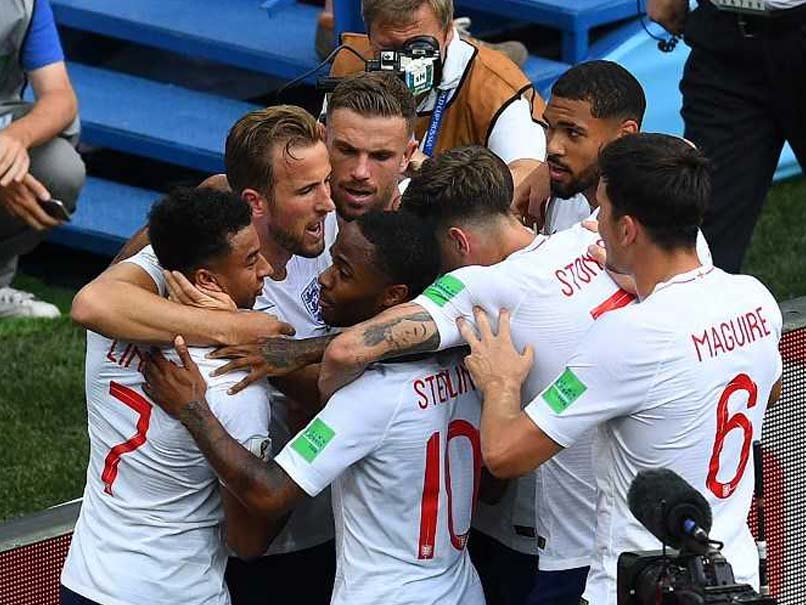 England's Harry Kane rocketed to the top of the 2018 World Cup goalscoring charts on Sunday, netting a hat-trick against Panama. As England routed the opposition with 6-1 final score, skipper Harry Kane overtook Cristiano Ronaldo and Romelu Lukaku. Kane now has five goals in two matches. Skipper scored two first-half penalties as Gareth Southgate's side ran riot in Nizhny Novgorod. The Tottenham striker scored his third and England's sixth, deflecting a Ruben Loftus-Cheek shot into the net, before he was taken off and replaced by Leicester striker Jamie Vardy. England look certain to qualify for the last 16 along with Belgium, whom they face in their final Group G fixture on Thursday. Portugal's Ronaldo and Belgium's Lukaku have four goals apiece. Earlier, England looked unstoppable and were on a roll as they scored 5 goals in the first half against Panama at Nizhny Novgorod Stadium. Brilliant attacking from the English kept Panama under pressure all the way in the first half. John Stones gave England a perfect start with a brilliant header off a corner kick in the eighth minute. Skipper Harry Kane scored off a penalty to make it 2-0 for England in the 22nd minute. Lingard, then placed in a curling shot from outside the box in the 36th minute helping his team with the third goal. In the 40th minute, John Stones  once again scored with a header. In the extra time, Stones was manhandled by Fidel Escobar inside the box which led to another penalty for England. Skipper Kane placed it beautifully and made in 5-0 for England at half time. (Highlights: England vs Panama)

19;35 IST: Thank you for staying with us on our coverage of this match. To see live updates of the match between Japan and Senegal (CLICK HERE)

England beat Panama 6-1 in their second encounter of the World Cup .

19:18 IST: England with another free-kick, Henderson almost gets a touch. Ball is in keepers hand. ENG 6-1 PAN

19:01 IST: Henderson with the kick and just MISSES! The ball curls away from the post.

19:00 IST: Murillo booked by the referee. Gets a Yellow Card

18:49 IST: GOAL! 62nd minute. Harry Kane does it again and it's a HAT-TRICK for the skipper. Kane becomes third England player to score a hat-trick at the World Cup. ENG 6-0 PAN

18:43 IST: 53rd Minute! 8 minutes into the second half!England with a corner-kick. This time Panama defense finally clears the ball.

That really could not have gone any better for @England...

They lead by FIVE goals at half-time in Nizhny Novgorod! #ENGPAN pic.twitter.com/S4kZHW630h

18:43 IST: 43rd minute!Second corner for England and it's another PENALTY! Stones manhandled by Fidel Escobar inside the box and referee points to the spot. Harry Kane is all set!

18:09 IST: GOAL! Stones scores his second goal of the match. Header to finish off a brilliant pass. It's ENG 4-0 PAN

18:06 IST: GOAL! Lingard makes it 3-0 for England. Curling shot from outside the box and Panama keeper had no chance. England are on a roll here. 3 goals inside 40 minutes. ENG 3-0 PAN

18:02 IST: Free-kick for England. Harry Maguire with the header but the ball sails over the net. ENG 2-0 PAN

18:00 IST: 30 minutes into the game!Panama are trying really hard butconfident England defenders are just not giving them any opportunity. ENG 2-0 PAN

17:45 IST: 15th minute! That was a close one!Barcenas shoots the ball but goes off wide.

17:37 IST: 8th minute: First corner for England in the match and its a GOAL! John Stoneswith a terrific header. England have an early lead in the game. ENG 1-0 PAN

17:35 IST: 5 minutes!Panama putting England under pressure in the opening minutes of the game. A couple of good moves by Panama inside English half.

17:32 IST: Collision between players. England's Lingard is down. Medical team on the ground and Lingard walks back.

17:24 IST: Both teams are at the centre along with the match officials for the national anthems. We are just minutes away from the start.

17:05 IST: England team is on the pitch for their warm session.

#ENG came out onto the field ahead of los Panamenos for their warm-ups, while the fans warm-up to another chorus of 'Three Lions (Football's Coming Home)!

Here's how the teams are shaping up...

16:40 IST: Starting XI for both the teams announced!

16:30 IST: Hello and welcome to the live updates of the match between England and Panama.

The first media storm of a hitherto relaxed campaign for the Three Lions was brewing on Friday after Gareth Southgate's planned team was inadvertently revealed when assistant manager Steve Holland's notes were photographed at training on Thursday. According to the notes, Marcus Rashford will replace Sterling with Ruben Loftus-Cheek stepping in for Dele Alli, who suffered a thigh injury against Tunisia.

Southgate criticised the media for giving England's opponents an upper hand. "If we were to give the opposition the opportunity of having our team it's a disadvantage to us," said Southgate. "So of course our media has to decide if they want to help the team or not." In contrast to his 23-goal season at club level for Premier League champions Manchester City, Sterling now hasn't scored in his last 21 internationals.

However, Rashford refuted suggestions England are too dependent on Kane for goals. "I don't think that's happening in this group," said the Manchester United striker, who admitted to being an admirer of Kane's ability to be in the right place at the right time. He gets himself in great positons. If we can find him, we will, and, more often than not, he's going to score."

Panama Harry Kane 2018 FIFA World Cup England vs Panama, Match 30 Football Live Score Live Blogs Nizhny Novgorod Stadium
Get the latest updates on ICC Women's Cricket World Cup 2022 and IPL 2022, check out the Schedule , Live Score and IPL Points Table. Like us on Facebook or follow us on Twitter for more sports updates. You can also download the NDTV Cricket app for Android or iOS.