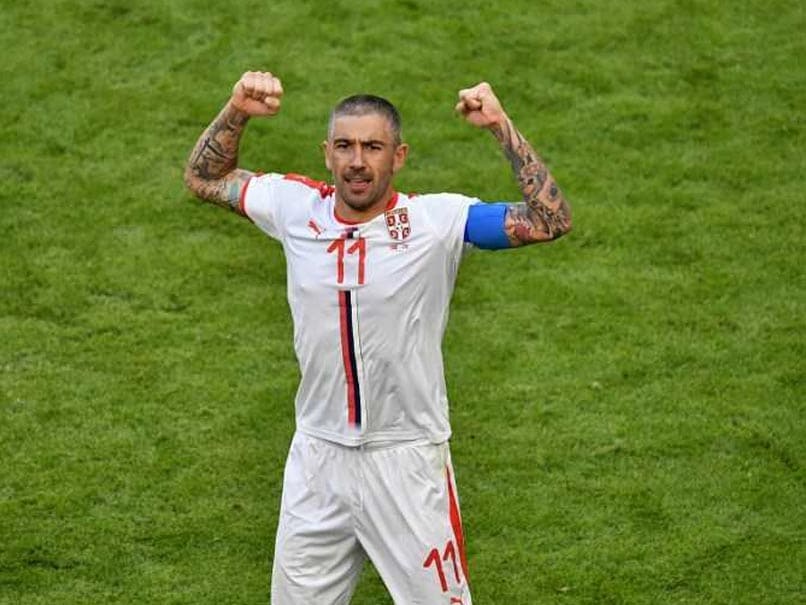 Aleksandar Kolarov's brilliant second-half free-kick gave Serbia a 1-0 victory over Costa Rica in their opening World Cup 2018 group match in Samara on Sunday. The Roma left-back made the crucial breakthrough early in the second half with a magnificent effort, and although Serbia missed chances to further extend their lead, they were not overly troubled by the Costa Ricans. The win puts Serbia in a strong early position in Group E ahead of games against Brazil and Switzerland as they look to reach the last 16 for the first time since becoming an independent country. (Highlights: Costa Rica vs Serbia)

19:30 IST: Thank you for joining us for the live blog.The second match of the day will see Germany take on Mexico.For live updates click here.

19:25 IST: And it is over! Serbia beat Costa Rica 1-0 in a Group E match at the Samara Arena. Aleksandar Kolarov scored for the winners.

19:22 IST: Costa Rica earn their last chance of the game to score in the dying minutes of the game but the referee raises his off-side flag.

19:13 IST: 5 minutes remaining and Mitrovic creates a chance but the Costa Rica defence are all over him and he fails to double his team's lead.

19:07 IST: 10 minutes remaining in the game and Costa Rica will be desperate to draw the game or rather win it.

19:05 IST:Serbia comes close to doubling their lead in the 76th minute but Navas keep Costa Rica in the game.

19:00 IST:Costa Rica have taken back the control of the game and are repeatedly breaking the Serbian defence with ease. However, they are unable to convert the chances into a goal.

18:56 IST: Stat -- We are four days in the World Cup and this is the longest that a red card has not been shown in a World Cup.

18:44 IST: GOAL!! Aleksandar Kolarov gives Serbia a 1-0 lead in the 56th minute of the game. Kolarov curls the ball over the wall, just inside the inside post as Navas is beaten all ends up. Serbia are ecstatic as they take the lead in the game. Navas is furious with himself.

The captain delivers! #SRB take the lead through a stunning free-kick from Aleksandar Kolorov! #CRCSRB 0-1 pic.twitter.com/uh6H6DIMlh

18:42 IST: Serbia get a free kick as David Guzman gets a yellow card for a bad foul.

18:37 IST: MISS!! This was one of the easiest chance that Serbia had gotten. Aleksandar Mitrovic receives a beautiful pass by Sergej, makes the run and was one-on-one with Keylor Navas. The Serbian tried to ease the ball past Navas, but the shot was blocked by the keeper with ease. He must be cursing himself for missing out on an easy chance. Serbia fail to take a lead in the 50th minute of the game.

18:33 IST:Three minutes into the second half and no team show any threat till now.

18:30 IST:The second half between Costa Rica and Serbia starts.

18:13 IST: Brilliant overhead kick by Milinkovic-Savic is wrongly flagged off-side by the linesman.

18:12 IST:Good run from Francisco Calvo but his shot from outside the box is miles away from the target.

18:10 IST: Five more minutes to go in the first half of the game. Can either of the team break the deadlock?

18:08 IST: Marcos Urena of Costa Rica receives the ball, turns and shoots but the ball goes into the stands

18:05 IST: Dusko Tosic of Serbia and Costa Rica's Johnny Acosta get injured as they collide in an attempt to clear the ball.

18:00 IST: Half an hour into the game -- Costa Rica have had the best chances so far but Serbia are starting to make their presence felt.

17:57 IST:Milinkovic-Savic gets into the D unmarked but his weak shot is easily saved Keylor Navas in Costa Rica goal. The linesman also raises his off-side flag

17:55 IST: 25 minutes in the game,Serbia are starting to grow into the game but are yet to make a clear cut chance.

17:48 IST:Luka Milivojevic wins a free kick for Serbia in the attacking half but the Costa Rican defence fends off the ball with ease.

17:45 IST:Ivanovic does well to beat the defenders and curls the ball in but Navas dives and punches the ball out of harms way.

17:42 IST: Close! Costa Rica get a corner. Giancarlo Gonzalez's free-header from inside the six-yard box is high and wide. Golden opportunity for Costa Rica goes abegging

17:40 IST: 10 minutes in the game and neither team have had a clear cut chance till now.

17:33 IST:Giancarlo Gonzalez of Costa Rica gets the first shot on target but it is straight at the keeper.

17:32 IST: Serbia gets the first corner of the match. Adem Ljajic curls the ball in and Mitrovic tries to head the ball but is cleared away by the Costa Rica defence.

17:30 IST: KICK-OFF!Serbia get the match underway.

17:25 IST:Serbia featuring in their first major tournament in seven years.

17:24 IST:Costa Rica and Serbia singing their respective national anthems before the start of the play.

17:22 IST:Both the teams are in the tunnel waiting for to walk out in the field.

Where are you watching #CRCSRB? Find out who is showing the game in your territory https://t.co/xliHcxWvEO

Where are you watching #CRCSRB? Find out who is showing the game in your territory https://t.co/xliHcxWvEO

16:35 IST:Here is how the starting XI for both the teams look:

Who's ready for the first match of the day?

16:30 IST: Hello and welcome to the live blog of the FIFA World Cup match between Costa Rica and Serbia.

These players, with an average age of 29 and boasting valuable experience, have known each other well and competed together for the last eight years. Navas is Costa Rica's best-known player and his strong performance in Brazil secured a move in 2014 to Real Madrid, where he has become one of the world's top keepers.

Serbia 2018 FIFA World Cup FIFA Football Live Blogs Costa Rica vs Serbia, Match 9
Get the latest updates on ICC T20 Worldcup 2022, check out the Schedule and Live Score. Like us on Facebook or follow us on Twitter for more sports updates. You can also download the NDTV Cricket app for Android or iOS.