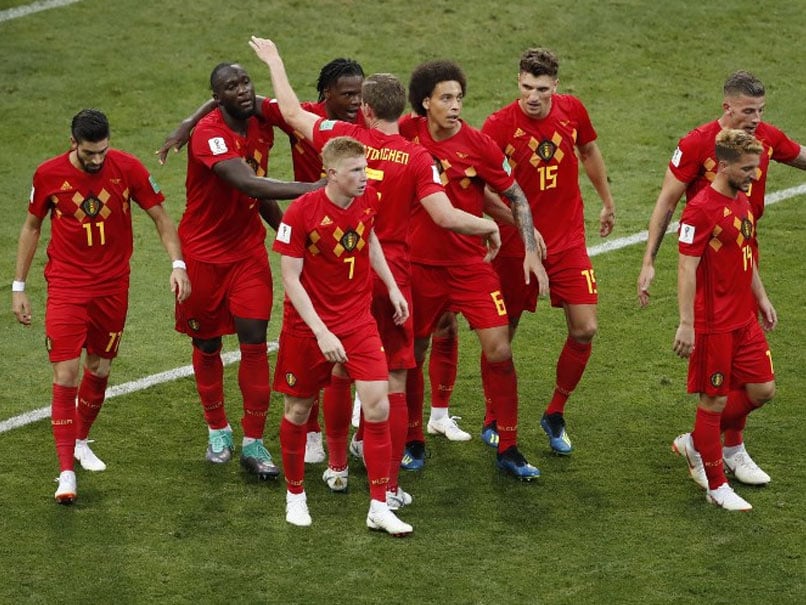 Romelu Lukaku scored a first-half brace followed by a double from Eden Hazard as Belgium defeated Tunisia 5-2 in the Group G encounter. Khazri for Tunisia got a consolation in the stoppage time. The Belgian Red Devils dominated the game from the onset but Tunisia looked unpredictable as they pulled one back through a Bronn header delivered off a Khazri set piece. Tunisia had five attempts on goal from which they came twice to scoring in comparison to Belgium's seven shot on goal. The Tunisian, who have attacked well on the counter will have to return back in the second-half with better composure on the ball to find any chance to even share spoils with the ruthless Belgians.
(Highlights: Belgium vs Tunisia).

Highlights of 2018 FIFA World Cup, Belgium vs Tunisia at Spartak Stadium in Moscow.

19:30 IST: Thanks for joining our live coverage of the Belgium vs Tunisia match. For the live updates of the next match between Korea Republic vs Mexico click here.

19:24 IST: GOAL! Khazriscores in the stoppage time to find a consolation for Tunisia as referee blows the final whistle, the match ends 5-2 in favour of Belgium as they secure a place in the knockout round from Group G ahead of England.

19:22 IST: GOAL! Batshuayiscores off a splendid ball in the box and he finally finds the back of the net finishes in the far corner in the 90th minute. 3 minutes added!

19:18 IST: Offside!Batshuayi again, bought on as a substitute he has got a plenty off chance in front of the goal but he has failed to convert it.

19:15 IST: Tunisialosing the ball, far too easily. Belgium has an easy control on the ball, complete dominance!

19:12 IST: Blocked!Batshuayi denied again in the 82nd minute, this time by Ben Mustapha who came in between the shot off a volley from inside the box.

19:10 IST: Crossbar!Batshuayi hits the bar in the 80th minute, how did that stay out, flurry of attack from the Belgians.

19:06 IST: Ben Mustaphasteps out of his box to save a potential goal, Belgium keeping the ball well as Batshuayi comes close to scoring but the ball is cleared off the line in 75th minute.

19:00 IST: 69 minutes up,Tunisia gets a free-kick near the edge of the box, Khazri delivers but cleared away as the ball falls on re-bound for Tunisia and the shot goes high.

18:42 IST: GOAL!Hazard completes his brace now as Belgium take a massive 4-1 lead in the 51st minute. He controls the ball with a brilliant first touch and then puts it past the back of the net.

18:40 IST: Better work-rate from Tunisa,combining well, putting Belgium on the back-foot, on comes a cross for Khazri but he could not gather it, a bit too heavy, 49 minutes up!

18:37 IST: Second-halfgets underway, Tunisia gets the ball rolling and they are straight onto attack, puts two back to back crosses but failed to make the most of it.

18:19 IST: GOAL!Lukaku with a brace, chips in the ball past Ben Mustapha as Belgium put some daylight between themselves and Tunisia taking a 3-1 lead at half-time that started off a Hazard penalty.

18:16 IST: 4 minutes addedin the first-half, both the teams would need a breather after a high intensity drama. Meanwhile, de Bruyne plays a cheeky cross for Lukaku it happens to be a bit too heavy for the Manchester United star.

18:12 IST: Corner for Tunisia, Khazridelivers in the 42nd minute but comfortably collected by Thibaut Courtois in the nets.

18:11 IST: S.Ben Youssef has been stretchered off the field in the 41st minute for a niggle, not a good sight for the Tunisians.

18:07 IST: Khazrilooked in a bit of trouble for Tunisia, a small breather was taken as Roberto Martinez passes on some key words to his playmaker Kevin de Bruyne around the 36th minute mark.

18:05 IST: Belgiumimposing threat through their attack, but Hazard doing too much, unnecessarily to lose hold off possession.

18:00 IST: Brilliant cross from Tunisia,ball falls on space but the shot goes off target. Tunisia all off a sudden are looking the better side.

17:50 IST: GOAL! This time Tunisia on target as Bronn heads home from a free kick. Tunisia pull a goal back. | Belgium 2-1 Tunisia after 20 minutes

17:47 IST: GOAL!Lukaku finishes it coolly to give Belgium a 2-0 lead over Tunisia in the 16th minute.

17:36 IST: GOAL!Penalty for Belgium. Eden Hazard takes it and scores against Tunisia in the 6th minute.

17:24 IST: National anthems!A huge roar goes out from the Belgium supporters as their national anthem is been sung, we are minutes away from the kick-off. Expect this to be a high scoring drama!

17:17 IST: Roberto Martinez has opted to go with an unchanged setting,he is going with a similar 3-4-2-1 line-up that he used in the last match. Meanwhile, Tunisia has made one change Khaoui replaces Sliti in the playing eleven.

17:15 IST: Hello and welcome to the live commentary from the Group G fixture between Belgium and Tunisia.

History favours the Belgians. They are yet to lose to African opposition at a World Cup, while Tunisia have never beaten a European side at a finals. The experienced Oussama Haddadi is set to replace Ali Maaloul at left-back in the Tunisian defence and Martinez saw plenty of danger for his team in the north Africans' opening 2-1 defeat to England.

Belgium, ranked third in the world, reached the quarter-finals of Brazil 2014 and are aiming to match their previous best of reaching the semi-finals at Mexico 1986.

However, Tunisia will not make life easy for Belgium as they seek to provide a bright spot in a poor World Cup for African sides, with Egypt and Morocco already out.

Romelu Lukaku Belgium vs Tunisia, Match 27 2018 FIFA World Cup Football
Get the latest updates on ICC Women's Cricket World Cup 2022 and IPL 2022, check out the Schedule , Live Score and IPL Points Table. Like us on Facebook or follow us on Twitter for more sports updates. You can also download the NDTV Cricket app for Android or iOS.