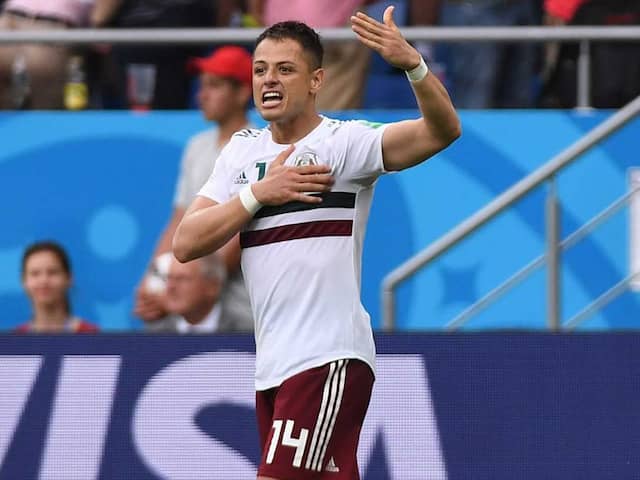 Mexico beat Korea Republic 2-1 to record their successive back-to-back wins in their Group F fixture at the Rostov Arena in Rostov-On-Don. A late stoppage time screamer by Korea Republic's Son Heung-min in the stoppage time (90+3 minutes) to give them hope but it was too late in the end. Javier Hernandez scored the second goal for Mexico in the 66th minute. Earlier, Carlos Vela's penalty saw Mexico lead Korea Republic by 1-0 at halftime. With this goal, he became the first Mexican since Cuauhtemoc Blanco to score penalty at World Cup (17 June 2010). After suffering a couple of scares from Korea Republic counter attacks, Mexico went ahead though the penalty. Mexico had more of the ball in the first half but Korea Republic had their share of chances as well.
(Highlights: Korea Republic vs Mexico)

22:33 IST: Thank you for staying with us for the live match updates.

22:20 IST: GOAL! Son Heung-min hits a screamer. Contender for the goal of the tournament for sure. It seems to be too late now. He scores the screamer in the 90+3 minute | Mexico 2-1 Korea Republic

22:16 IST: Korea Republic have tried their best but their end product was missing.

22:12 IST: Mexico are trying to kill the game. They are passing around just to kill time as they edge closer towards victory. Final 5 minutes to go.

22:02 IST: Korea Republic need to do something real soon. They only have fifteen minutes.

21:54 IST: GOAL! Javier Hernandez slots home from close range after leaving the Korea Republic defence for dead. His 50th goal for Mexico. Superb and cool finish by the former Manchester United striker. The keeper could do nothing out there. | Mexico 2-0 Korea Republic after 66 minutes

21:50 IST: Lozano was through on goal. CHo was the man to beat for him aftre a lovely ball from Guardado but a superb tackle by Hwang saves Korea Republic from conceding a second goal. Mexico 1-0 Korea Republic after 62 minutes

21:42 IST: Mexico's Javier Hernandez tries his luck from distance but to no avail in the 51st minute.

21:36 IST: Mexico aren't in any rush as they hold the lead. They are simply keeping possession.  | Mexico 1-0 Korea Republic after 49 minutes

21:16 IST: HALFTIME1 Mexico easing on the ball, comfortable in possession as Miguel Layun delivers a free-kick into the box, which fails to find a target man and the referee blows the whistle for half-time. Mexico lead 1-0 both on the scoreboard and in terms of possession.

21:13 IST: Hirving Lozano with chance from the close range in the 42nd minute, as he gets past the Korea Republic defence with ease but he has skied the shot, well over the bar!

21:11 IST: Fact: Carlos Vela became the first Mexican to score a penalty since Cuauhtemoc Blanco did at the World Cup on 17 June, 2010.

21:09 IST: Son breaks free through a long ball, his pace beats the Mexican defender but the ball took a little glove from the goalkeeper for a corner -- which is punched away from Ochua on the second cross in the box. 40 minutes played!

21:05 IST: Mexican goalkeeper Ochua steps out from the box, to keep the ball rolling to his defence as the Mexican loses the ball and Son starts an attack from the right flank but fails to get the penetration right for the South Koreans, 37 minutes up!

21:00 IST: Son on a free-kick for Korea Republic, in the 31st minute and he has skied it well over the crossbar.

20:55 IST: GOAL! Carlos Vela puts Mexico in the front in the 26th minute from the spot. The LA Galaxy forward calmly tucks in the penalty in the back of the net.

20:53 IST: Son delivers, cleared away by the Mexican defence who quickly get on the counter, two on three on the ball. Penalty awarded to Mexico in the 23rd minute after Jang Hyunsoo handled the ball in the penalty area.

20:51 IST: Son takes multiple close range shots from inside the box, blocked by the defender in the 21st minute. Corner for Korea Republic!

20:45 IST: 15 minutes into the game! Both sides still goal-less but Mexico clearly dominating the game with 70 percent possession.

20:42 IST: Header from Hernandez! The ball goes off wide.

20:39 IST: Free-kick for Mexico. Cross from the right. Cleared! comfortably by the Korean defense.

20:38 IST: Seven minutes into the game. No real chance for both the teams till now.

20:26 IST: The two teams are out, national anthems are done and we are just minutes away from the start of the crucial Group F fixture.

19:50 IST: Starting XI for both the teams announced!

19:20 IST: Hello and welcome to the live updates of the match between Korea Republic and Mexico.

Son is a star in his home country, to the extent he has to wear a disguise when he leaves the house and Korean journalists are employed in London, where they wait to speak to the forward after every Tottenham fixture in the Premier League. But for all the attention he receives, the 25-year-old, who moved to Germany when he was 16 and made his name at Hamburg and Bayer Leverkusen, is humble, driven and immensely popular with his team-mates. He still lives in Barnet with his parents. His father, Son Woong-jung, is a former striker himself, whose professional career was cut short by injury. Tottenham's training ground, based nearby in Enfield, has housed Korean chefs, invited in by Son in the hope of ingratiating his team-mates to bulgogi (barbecued beef), japchae (stir-fried noodles) and Samgyetang (a type of chicken soup).

Korea Republic 2018 FIFA World Cup Korea Republic vs Mexico, Match 28 Football Live Score Live Blogs Football
Get the latest Cricket news, check out the India cricket schedule, Cricket live score . Like us on Facebook or follow us on Twitter for more sports updates. You can also download the NDTV Cricket app for Android or iOS.