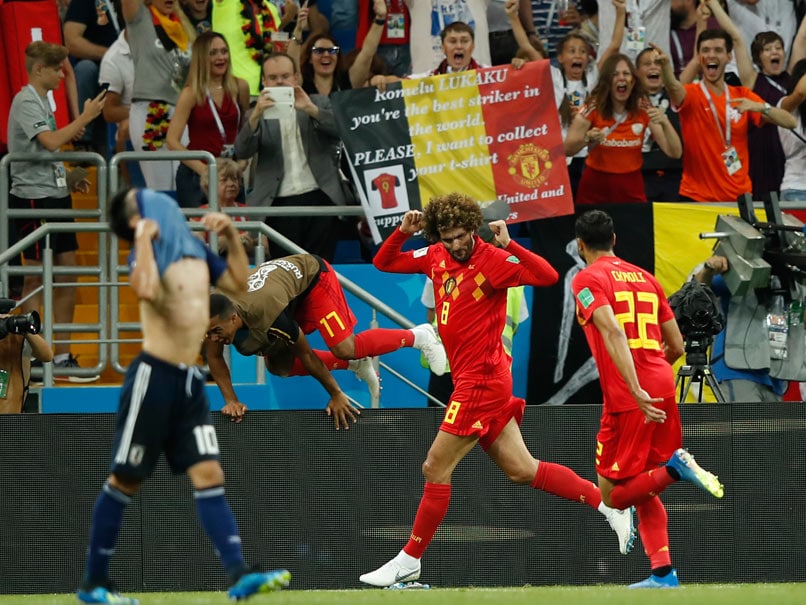 Belgium scored a last-gasp winner to beat Japan on Monday and set up a World Cup quarter-final against Brazil. The match looked set for extra-time after goals from Jan Vertonghen and Marouane Fellaini cancelled out efforts from Genki Haraguchi and Takashi Inui. But as the seconds ticked down, Belgium poured forward and Nacer Chadli grabbed a dramatic winner. Belgium, who made 10 changes for the match, were by far the better side but Japan defended doggedly and threatened on the break as they seek to reach a World Cup quarter-final for the first time. The winner of the knockout match in Rostov will face Brazil, who earlier beat Mexico 2-0, in a quarter-final in Kazan on Friday. As expected, Belgium coach Roberto Martinez made wholesale changes from the side that beat England 1-0 in the group stages. He reverted mainly to the same starting line-up that thrashed Tunisia 5-2, with Manchester City defender Kompany as the only new addition, in for Dedryck Boyata at centre-back. Striker Romelu Lukaku, who has scored four goals so far in Russia, returned to lead Belgium's star-studded attack. Eden Hazard, Dries Mertens and Kevin De Bruyne were restored in a powerful midfield after being rested against England. Japan coach Akira Nishino also revamped his starting line-up after the 1-0 defeat to Poland in the group stages. (Highlights: Belgium vs Japan)

01:22 IST: GOAL! High quality counter-attack from Belgium, Lukaku plays a dummyas Chadli in space behind unmarked, makes no mistake to tuck it away for a goal.

01:20 IST: Free-kick for Japan in the 93rd minute,came off a Kompany foul. Honda strucks a brilliant one but Courtois keeps it out. Japan have a corner but Courtois catches it and initiates a counter-attack.

01:18 IST: 4 minutes added!Japan have a corner. But the ball has been tucked away by the Belgian defence.

01:13 IST: DOUBLE SAVE! 35-year-oldJapanese goalkeeper Eiji Kawashima keeps first Chadli and then Lukaku out -- both from a close range header. 86 minutes played!

01:11 IST: Honda makes a lovely run inside the box,from a through ball but the ball hits the side-netting.

01:10 IST: Japan have brought in Keisuke Honda to replace Haraguchiin the 81st minute.

01:06 IST: Belgium have the tempo, momentum of the match.We have seen 4 shots on target in the second-half, all on corner. Meanwhile, it's a corner for Belgium -- Kompany's header has been tucked away. Goal kick for Japan!

00:59 IST: Inui from the left flank finds Nagatomo ahead of him,who delivers a cross but Osako's shot has been denied. This is beginning to become a thriller of a contest.

00:57 IST: GOAL!An astonishing header from Jan Vertonghen pulls one back for Belgium, Japan failed to clear their lines, paid the price. Belgium 1-2 Japan.

00:55 IST: Sloppy from Japan in the midfield,Witsel finds Fellaini on the right flank the cross comes in for Lukaku but well blocked by the Yoshida to keep his shot out. 68 minutes have been played.

00:50 IST: Romelu Lukaku misses a chance from close range,his header goes wide off target from a cross well delivered by Vertonghen on the 61st minute.

00:40 IST: GOAAAL! Takashi Inuiscores a blinder from outside the box. Belgium in trouble. After 52 minutes, Belgium 0-2 Japan. Japan have now scored more goals in the ongoing World Cup then they have ever done in any other World Cup.

00:35 IST: GOAL!Genki Haraguchi puts Japan in the lead, 48th minute. Gets past Jan Vertonghen through an excellent  through ball to break the deadlock. Belgium 0-1 Japan.

00:33 IST: Japan gets the second-half underway. Neither side have made any changes in the half-time.

00:15 IST: One minute added for the half-time. It remains Belgium 0-0 Japan at half-time as the referee blows the whistle.

00:14 IST: Courtois spills it,after Nagamoto plays a ball throw the left wing to find Osako who gets a touch as the goalkeeper grabs the ball on the second attempt.

00:09 IST: Eden Hazard brought down by Shibasakias he collects the first yellow card of the evening. 40 minutes through, still goalless.

00:06 IST: Hazard shoots from inside the box, BLOCKED!Yoshida does well to keep the Chelsea star out. 36 minutes on the clock.

00:05 IST: Belgium stretched for a few  seconds,Japan initiate an attack from the right flank, make a cross but lose the ball, quite easily.

00:01 IST: Shinji Kagawa does well inside the box,to get past the Belgian defenders, crosses the ball but the header straight into the hand of Thibaut Courtois

23:58 IST: Japan trying to play long balls,only to lose away the ball with ease to Belgium. 30 minutes on the clock.

23:55 IST: Chance for Belgium in the 25th minute,off a fine cross which locates Lukaku in space but Yoshida does well to keep him out. Constant threat from Belgium!

23:53 IST: Belgium have set the tempo,Japan forced to play on the defence. Lukaku from the right flank switches play Carrasco tries to play the ball to Hazard but the link-up play fails, the ball was a bit to heavy.

23:50 IST: Romelu Lukaku in space, takes a shot, unmarkedbut the defender does well to keep him out. CORNER for Belgium! Kevin de Bruyne takes it but the ball is safely cleared away by the Japan defence.

23:45 IST: Axel Witsel takes a shot from outside the box, deflected for CORNER!De Bruyne takes a short one, the ball on the return finds Vincent Kompany who heads it only to see the ball cleared away by Japanese defence.

23:44 IST: Eden Hazard makes a long run,opens up space passes the ball to Carrasco who rolls it inside the box but Haraguchi does well to keep the threat away.

23:40 IST: Kevin de Bruyneplays a cheeky chip to target Dries Mertens inside the box, but the ball falls to heavily for him. 11 minutes played.

23:35 IST: Japan combining well through the right wing,but Belgium have maintained a high back-line to keep them out, so far.

23:31 IST: Shinji Kagawa takes a shot,off target. Intentions clear from the Japan side, they are going to throw their kitchen sink in the match.

23:30 IST: Kick-off!Romelu Lukaku kicks from right to left to get the match underway.

23:22 IST: National anthemstake the centre-stage. Belgium, Japan look in readiness for the kick-off.

23:05 IST:A closer look on the formation of both Belgium and Japan and how they have shaped-up in anticipation of the Round of 16 clash.

And here are how #BEL and #JPN are shaping up for #BELJPN...

Thoughts on the teams? #WorldCup pic.twitter.com/N2JNZkPL0v

23:00 IST: Both Belgium and Japan have arrivedfor the crucial fixture which will see one of the side out of the World Cup.

Welcome to Rostov-on-Don, #BEL and #JPN!

22:10 IST:The playing XI between Belgium and Japan have been announced.

21:35 IST: The Belgium fanslooks all thrilled and set for the tense, knock-out clash.

21:32 IST: In the double-header today,we already saw Brazil through to the quarter-finals after they blanked Mexico 2-0 in the previous match.

21:30 IST: Hello and welcome to the live commentary from the Round of 16 clash between Belgium and Japan.

After making nine changes for last Thursday's win over England, Martinez is expected to revert to the line-up which impressed in one-sided wins over Panama and Tunisia. With nine goals so far in Russia, Belgium are the World Cup's top-scoring team.

Striker Romelu Lukaku has claimed four with two against both Tunisia and Panama in the group stages. The Manchester United star is set to face Japan after missing the win over England with an ankle knock. Martinez has all his players fit as Belgium hope to improve their best performance at a World Cup finals, 32 years after reaching the semi-finals of Mexico 1986.

Barcelona defender Thomas Vermaelen, 32, who played for 76 minutes against England, has proven he is over the thigh injury he suffered last month. Manchester City centre-back Vincent Kompany, also 32, who replaced Vermaelen late on against the Three Lions, could force his way into the starting side after shaking off a groin injury.

Romelu Lukaku Shinji Kagawa 2018 FIFA World Cup Football Live Score Live Blogs Belgium vs Japan, Round of 16 Football
Get the latest updates on ICC T20 Worldcup 2022, check out the Schedule and Live Score. Like us on Facebook or follow us on Twitter for more sports updates. You can also download the NDTV Cricket app for Android or iOS.