The experienced Indian doubles pair of Leander Paes and Mahesh Bhupathi survived a scare to reach the second round of the Wimbledon on Friday. 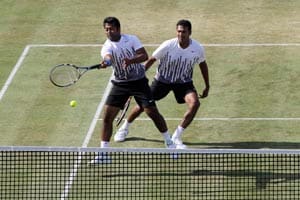 The experienced Indian doubles pair of Leander Paes and Mahesh Bhupathi survived a scare to reach the second round of the Wimbledon on Friday.

The third seeded Indian pair registered a hard-fought 6-7 (7), 6-4, 6-4 victory over the Croatian combo of Ivan Dodig and Lovro Zovko in the opening round of the prestigious grass court tournament.

Somdev Devvarman and his Japanese partner Kei Nishikori also crossed the first hurdle and advanced to the second round with a 6-7(3), 6-3, 6-2 win over the German duo of Rainer Schuettler and Alexander Waske in the men's doubles.

In the women's doubles, Sania Mirza and her Russian partner Elena Vesnina reached the pre-quarterfinals after registering a thrilling three-setter victory over Czech Renata Voracova and Galina Voskoboeva of Kazakhstan.

Earlier, Somdev was ousted early in his Wimbledon debut when he went down in straight sets to Russian Mikhail Youzhny in the second round.

The fourth seeded Indo-Pak Express of Rohan Bopanna and Aisam-ul-haq had made a shock first round exit with a 6-2, 2-6, 19-21 defeat against unseeded Colombians Juan Sebastian Cabal and Robert Farah in a marathon three-setter.

Comments
Topics mentioned in this article
Tennis Elena Vesnina Kei Nishikori Mahesh Bhupathi Sania Mirza Somdev Devvarman Leander Paes Wimbledon 2011
Get the latest updates on India vs Australia Series, check out the India vs Australia Schedule for 2020-21 and Ind vs Aus live score . Like us on Facebook or follow us on Twitter for more sports updates. You can also download the NDTV Cricket app for Android or iOS.