Murray, who took his record to Chardy to 5-1, has only spent 8h 56min on court in total for his five matches at this year's Open and he faces a potential semi-final against 17-time Grand Slam champion Federer, who beat him in last year's Wimbledon final. 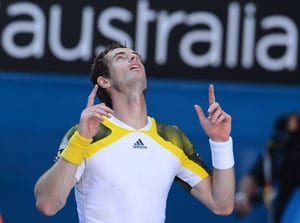 Andy Murray beat Jeremy Chardy on Wednesday to reach the Australian Open semi-finals without dropping a set, and then shrugged off concerns he will be undercooked for the battles ahead.

The British third seed was too strong and accomplished for the unseeded Frenchman, winning 6-4, 6-1, 6-2 in 1hr 51min on Rod Laver Arena, and will now face Roger Federer or Jo-Wilfried Tsonga in the semi-final on Friday.

Murray rated the win, which put him into his fourth consecutive Australian Open semi-final, as his best performance yet and said he had no fears about a lack of a tough work-out heading into the tournament's late stages.

Murray has only spent 8h 56min on court in total for his five matches at this year's Open, and faces a potential semi-final against 17-time Grand Slam champion Federer, who beat him in last year's Wimbledon final.

The victory took the Scot's winning streak at the majors to 12 since his breakthrough US Open triumph in New York last September, and put him into his 12th Grand Slam semi-final.

"For me today was a decent test. I played a lot of tennis in December. I had some good (lead-up) matches in Brisbane. So I can't be disappointed about being in the semis of a slam without dropping a set. That would be silly," he said.

"I think you have to trust yourself that when you are tested you're going to play better tennis. You never know for sure. But in the build-up to the tournament I played very well. I haven't lost a set here yet.

"I've done a good job so far in this tournament. I can't be disappointed with where my game's at and I hope the next round I play better again."

"Today was the best I've played. I've struggled in my last few rounds a little bit, my last opponent (Gilles Simon) was injured so it wasn't much of a match as he struggled physically," Murray said.

"Jeremy's had a great tournament, he's beat some top players so I needed to come out sharp and get off to a good start."

Murray broke Chardy's opening two service games, before dropping his own in the sixth, and claimed the opening set on his third set point in 44 minutes.

Murray got stronger as the match progressed and Chardy began to fade, and he broke the Frenchman's serve three times to stroll through the second set in 32 minutes.

Murray got two more service breaks to lead 5-1 in the final set, but was broken as he attempted to serve out for the match. His victory was clinched in Chardy's next service game, winning it on his first match point.

Chardy, who beat former US Open champion Juan Martin Del Potro and 21st seed Andreas Seppi on his way to his first Grand Slam quarter-final, was happy despite the loss.