This will be Spaniard Feliciano Lopez's first visit to the USD 450,000 Chennai Open tournament, India and South Asia's only ATP World Tour tennis event which draws many of the world's leading tennis stars. 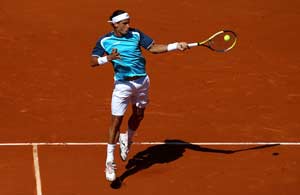 World no. 14 Feliciano Lopez has confirmed his participation in the 20th edition of the Chennai Open, scheduled to be held here from January 5-11 next year.

This will be the Spaniard's first visit to the USD 450,000 tournament, India and South Asia's only ATP World Tour tennis event which draws many of the world's leading tennis stars.

Lopez will begin his 2015 season here after playing an impressive year of tennis when he successfully defended his AEGON International title and became the first player to reach consecutive grass-court finals prior to Wimbledon.

He left a strong impression by reaching the fourth round of Wimbledon but went down to Stan Wawrinka. The Madrid native also reached the third round of the US Open for the fifth straight year, apart from defeating World No.2 Rafael Nadal at the Shanghai Rolex Masters.

The 33-year-old left-handed player has had an exciting tennis career after he turned professional in 1997, during which he won four career titles and reached his current career-high singles ranking of World No. 14 this week. In 2005, he was the first male Spanish tennis player to reach the quarterfinals of Wimbledon since 1972.

He repeated the feat in 2008 and 2011. Lopez is known as a strong grass court player, with three quarterfinal runs at Wimbledon.

Speaking about his confirmation, Lopez said, "As South Asia's only ATP World Tour tennis event, the Chennai Open presents a great platform to kick start the new season. I am glad to confirm my presence, look forward to playing in the city of Chennai, and begin the year on a positive note. Can't wait to get there to play in front of my Indian fans!"

Comments
Topics mentioned in this article
Feliciano Lopez Stanislas Wawrinka Rafael Nadal Wimbledon 2014 Tennis
Get the latest updates on ICC T20 Worldcup 2022, check out the Schedule and Live Score. Like us on Facebook or follow us on Twitter for more sports updates. You can also download the NDTV Cricket app for Android or iOS.