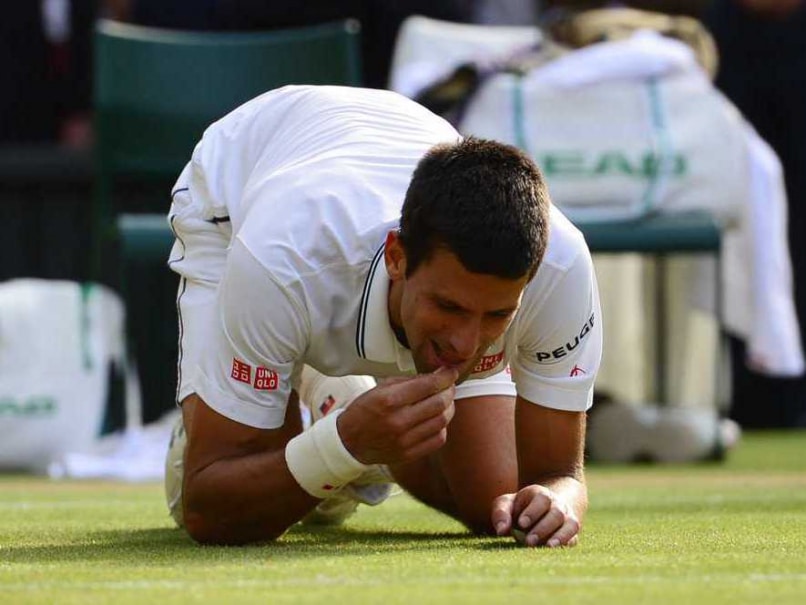 Serbia's Novak Djokovic eats the grass as he celebrates winning his men's singles final match against Switzerland's Roger Federer on day thirteen of the 2014 Wimbledon Championships at The All England Tennis Club in Wimbledon, southwest London, on July 6, 2014.© AFP
London:

Novak Djokovic admitted he feared he'd never win another Grand Slam, but with a second Wimbledon title wrapped up, the new world number one is now planning on catching Roger Federer and Rafael Nadal.

But he is still lagging behind the Swiss and Spaniard in the overall Grand Slam chase -- Federer had 17 while Nadal's record ninth French Open last month moved him to 14. (Also read: No storybook finish, but hope for more chapters)

It is that sort of maddening inconsistency that had become a curse with Djokovic having lost all three of his most recent Grand Slam finals and five of the last six.

"I started doubting of course -- I needed this win a lot.

The belief that Sunday's epic win, which had almost slipped away from him when he squandered a 5-2 lead in the fourth set and then a match point, could also be a springboard for more majors was shared by coach Boris Becker.

The three-time Wimbledon champion was brought on board in December last year in an attempt to help push Djokovic over the finish line at the majors.

It didn't work at the Australian Open, where he lost in the quarter-finals or at the French Open where his hopes of completing a career Grand Slam were thwarted, again, in the final by Nadal.

But the partnership paid dividends at Wimbledon even if Djokovic spent almost five hours more on court than Federer in getting to the final.

"We're looking pretty good now -- he's back to number one, Wimbledon champion, obviously he's going to take a couple of weeks off now but the next big one is the US Open," said Becker.

There was little evidence of what made Becker famous in his 1980s pomp on show in the final with Federer the keener of the two to serve-and-volley in deference to the influence of his coach, Stefan Edberg, a rival and contemporary of Becker.

Federer served-and-volleyed 36 times but Djokovic said he was prepared for the Swiss star's game plan as he chased what would have been a record eighth title at Wimbledon and which would have made the 32-year-old the oldest champion of the modern era.

"Those were particular changes in his game that I noticed before coming to this match. I paid attention to it and I was ready for it," said Djokovic.

"That's why he has been winning so many Grand Slams, because he feels confident to play these shots at the important time."

"Sincerely, this has been the best quality Grand Slam final that I have ever been part of," said Djokovic, whose Australian Open final win two years ago lasted almost six hours.

"But this is definitely the best match. It's the most special Grand Slam final I've played.

"I didn't allow my emotions to fade away, as was probably the case in the Roland Garros final. I am just very glad to win a Grand Slam final after losing the last three out of four.

Djokovic will now take a break to be his fiancee Jelena Ristic, who is pregnant with the couple's first child.

"There are few important things coming up. Getting married. Of course in a few months becoming a dad," he added.

"I think I can close the chapter of my tennis career just for little bit now. I think I deserve that for few weeks to rest, to enjoy, be with my fiance, my wife to be, and my family."

Comments
Topics mentioned in this article
Wimbledon 2014 Novak Djokovic Roger Federer Rafael Nadal Tennis
Get the latest updates on ICC Women's Cricket World Cup 2022 and IPL 2022, check out the Schedule , Live Score and IPL Points Table. Like us on Facebook or follow us on Twitter for more sports updates. You can also download the NDTV Cricket app for Android or iOS.