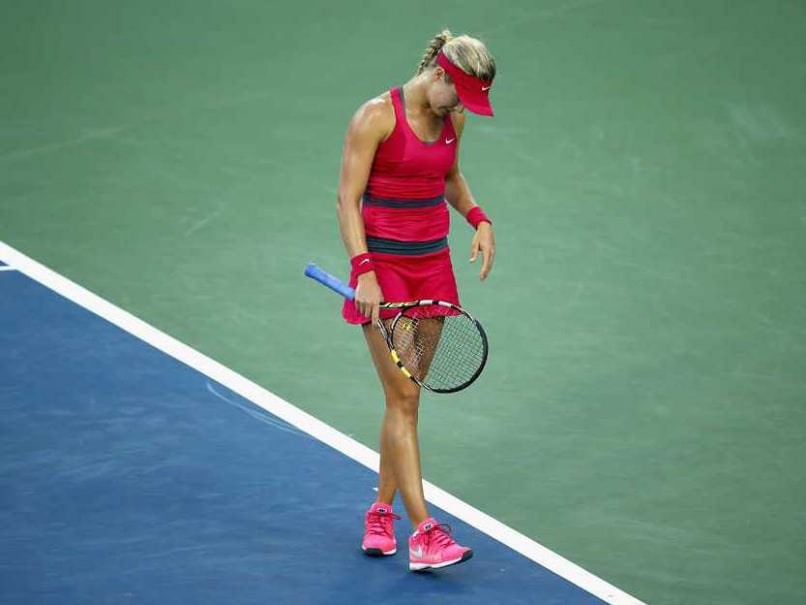 Eugenie Bouchard of Canada looks downward after losing a point during her match against Svetlana Kuznetsova at Western & Southern Open on August 13, 2014 at the Linder Family Tennis Center in Cincinnati, Ohio.© AFP
Cincinnati, USA:

Wimbledon champion Petra Kvitova and finalist Eugenie Bouchard both crashed out of the second round of the Cincinnati hard court tournament on Wednesday in a setback to their US Open preparations.

Bouchard has now dropped both of her summer hard court matches, also stumbling out of the gate at home in Montreal last week.

Kvitova's exit in her first match after enjoying a first-round bye came a week after a third-round exit in Montreal, and the world number four admitted she couldn't find her way against the Ukrainian, who is playing her first tournament since defending her title at Baku last month.

"I can still find moments when I really don't know what's happening out there," admitted Kvitova. "Even if I'm older and have more experience, I can still have days like today."

Kvitova held a 3-0 lead in the second set as the Czech attempted a comeback effort. But Svitolina, ranked 39th in the world, nudged the scoreline back to a 5-4 lead only to be broken as she served for the victory.

The pair traded two more breaks before the tiebreaker, where Svitolina claimed victory on the first of four match points as Kvitova mis-hit a return wide.

"From the beginning I didn't feel very comfortable out there," Kvitova said. "And I was trying to really fight, I just wasn't able to do that today."

Top seed Serena Williams got through safely as she defeated Australian Samantha Stosur for the second time in as many weeks, 7-6 (9-7), 7-6 (9-7).

Fourth seed Agnieszka Radwanska beat Japan's Kurumi Nara 6-2, 6-2. Stosur, who beat Williams in the 2011 US Open final, made the world number one fight for her win.

"She was up in both of the breakers, it was just a great match, to be honest," said the winner. "She served unbelievable, it was really intense."

German Angelique Kerber, the sixth seed, advanced against Ekaterina Makarova 6-4, 6-1 while Italian 13th seed Flavia Pennetta beat Taylor Townsend of the US 6-4, 6-3 to set up a clash with Williams.

Comments
Topics mentioned in this article
Petra Kvitova Eugenie Bouchard Wimbledon 2014 Tennis
Get the latest updates on ICC T20 Worldcup 2022, check out the Schedule and Live Score. Like us on Facebook or follow us on Twitter for more sports updates. You can also download the NDTV Cricket app for Android or iOS.