Ravichandran Ash'Wins' it For India

India won the first Test against West Indies by an innings and 92 runs on Sunday night, and the chief architect of that victory was Ravichandran Ashwin. The 29-year old weaved magic with not just the ball but also with the bat. Here is why the victory was an Ashwin-esque affair R Ashwin followed up his century with his 17th five-wicket haul.© AFP

Until lunch on the fourth day of the Antigua Test, Ravichandran Ashwin had not settled into a rhythm.

Neither did he get wickets in the first innings, nor was he able strike early in the second. But things changed after lunch.

"In the first innings, the fast bowlers had made an impact. Honestly I was not being able to get into rhythm. But Virat told me at lunch break that it was all about getting a good spell in," said the Chennai all-rounder after he managed the stupendous feat of 7/83 at Sir Vivian Richards stadium.

Many years from now, this sporting memory will become a stuff of legend, and here is how it all began. In the third ball of the 36th over in West Indies' second innings, Rajendra Chandrika punished a short ball from Ashwin.

But Ashwin was not willing to surrender. Two balls later, Chandrika did while playing a flick on the front foot. That triggered the slide for West Indies.

Then came a ripper from Ashwin to remove a settled Marlon Samuels. By now, Ashwin knew his rhythm was back. He said, while crediting Anil Kumble for his performance, "I Spoke to Anil bhai also about my rhythm. He worked with me in the nets on my rhythm and it came out very well."

Anil Kumble says Ashwin is a modern cricketer in his mould and Ashwin has proved it with numbers. Ashwin is now the third highest wicket-taker after 33 Tests.

Ashwin's seven wickets in the Antigua Test made the all-rounder the third highest wicket taker of all time after 33 Tests.

And this was also the first time Ashwin batted at No.6, vindicating the team management's decision by notching up his third Test century.

Ashwin is now the third Test cricketer after Jack Gregory and Ian Botham to achieve a special feat of seven or more wickets and a hundred in the same match.

Virat Kohli later said about him, "We have always felt that Ashwin had the skills to bat at No.6. Whenever the team has struggled outside India, he has counter-attacked and believed in his batting ability. He was a batsman before he became an off spinner. It helps that he keeps working hard on his batting as well. It is wonderful to have someone like Ashwin in the squad who is pretty good at both." 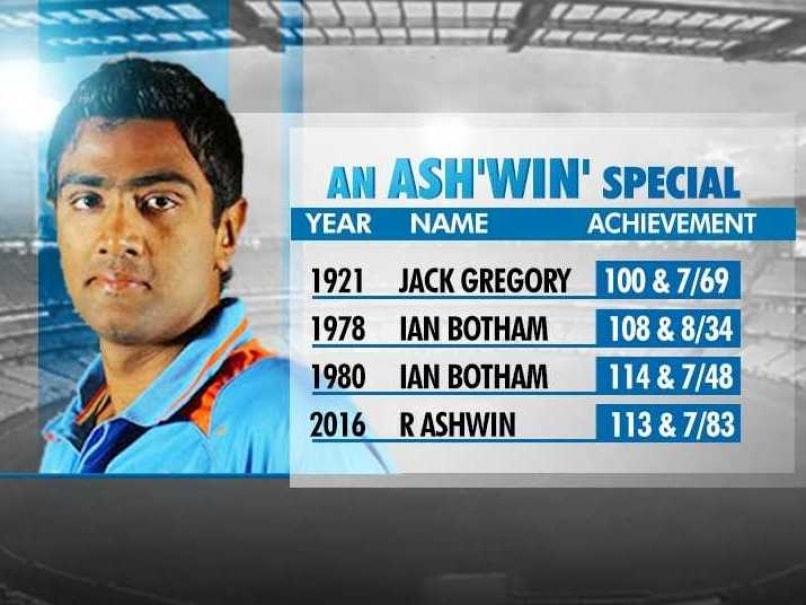 R Ashwin's spectacular show in Antigua gave India an early lead in the series, special in more ways than one because this was India's largest innings victory outside Asia.

Comments
Topics mentioned in this article
Ravichandran Ashwin Anil Kumble Virat Kohli West Indies vs India 2016 India Cricket Team West Indies Cricket Team Cricket
Get the latest updates on Fifa Worldcup 2022 and check out  Fifa World Cup Schedule, Stats and Live Cricket Score. Like us on Facebook or follow us on Twitter for more sports updates. You can also download the NDTV Cricket app for Android or iOS.