India Can Become World No 1 in Tests by End of Season: MS Dhoni

MS Dhoni feels the team is shaping up well under Test skipper Virat Kohli, and the fact that all the Indian fast bowlers are fit and doing well will hold the team in good stead in the upcoming Test matches 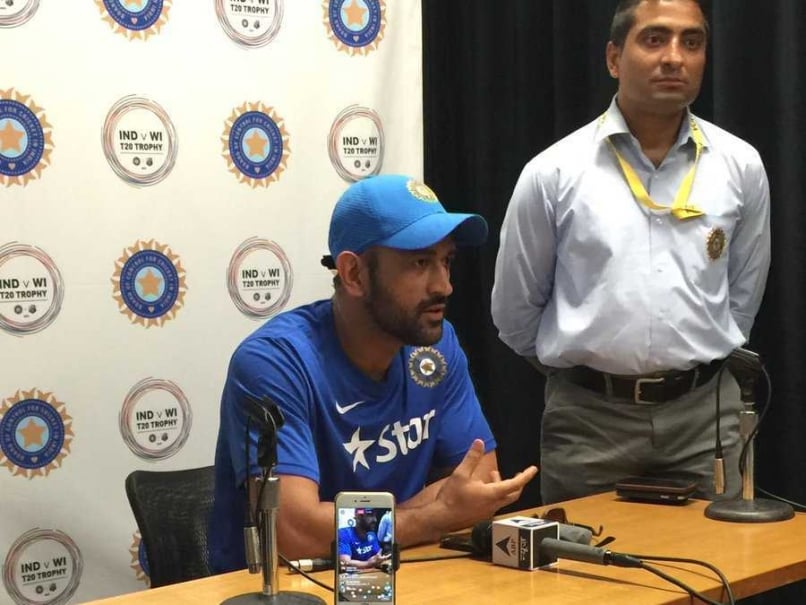 Limited over captain Mahendra Singh Dhonibelieves that India's Test side led by Virat Kohli can regain it's top ranking in longest format by the end of the home season in which they play 13 Tests against New Zealand, England, Australia and Bangladesh.

Dhoni feels the team is shaping up well under skipper Virat Kohli and the fact that all the Indian fast bowlers are fit and doing well will held the team in good stead in the upcoming Test matches.

"I think the Indian Test team is shaping up well. It seemed we were more settled in T20 and ODI but now our team had a good batting experience. If you notice, for the last 2 and a half years, we had the same batting unit, barring one or two changes. So you learn a lot. Test remains the ultimate format," Dhoni told reporters after the 2nd T20I was washed out on Monday.

Dhoni is happy that talent is now getting transformed into performance.

"As far as performance is concerned, the talent and experience of the team has started to get reflected in the performance and in the times to come, this season we will be playing 13 Tests and I think by the end of it if everything goes well, touchwood, we will be the number one team in the world and the gap between the first and second team will be substantial," he added.

Coming back to the short T20 series, Dhoni said while the pitch remained same where the bowlers were belted for 245 in the first game, it was the addition of an extra spinner in Amit Mishra, which paid off as the World T20 champions were bowled out for less than 150.

"I don't think the wicket changed a lot. It is same as the last wicket. It is the exposure that they had in the last game, it gave them the ability to go back and think about their own game plan and often when there is no break between two matches, it actually helps the bowlers to quickly go back and plan," said the 35-year-old from Ranchi.

"It is the execution that matters and I think it was great. Addition of a spinner also paid off well. Mishra bowled really well. I felt it was the whole bowling unit who could restrict them to 140, it was a brilliant effort," he added.

Plenty of positives to take away

Dhoni said there is plenty of positives to take away from the short series.

"There is plenty to take away. The way we chased down 244 odd (245) and came close in the last game was a dificult one. The reason being once you have so many runs to chase, it puts you under pressure to score right from the strart and the batsmen did it pretty well," he said.

"When it comes to bowling, the first game was tough for the bowlers but the way they came back in the second game, it was fantastic, it showed a lot about the character of the bowling unit. We have a more experienced unit. They have played a lot of Test cricket and also have the experience of playing at IPL and shorter format.

"As a unit, the bowlers are looking good. As a batting unit, it was slightly different from the World T20 team, it was a chance for a few youngsters to come and grab the opportunities. The biggest was the way Rahul batted yesterday. Of course, the result didn't go in our favour but overall a lot of positives.

"The concern for me was the fact that quickly we have to adapt to the shorter format and most of the guys were playing Test match before this so the transformation had to be great and I think all the team members responded well to that."

Dhoni also gave a thumbs up to the venue at USA which hosted the two twenty20 internationals.

"This is a good journey not only for India but also West Indies, they are closer from here. We can always come back and play a series. Unfortunately, today there was thunderstorm but otherwise the weather was good. It suits cricket," he said.

"Overall, when you play cricket, one is player's passion and the other thing is host broadcaster, they want to make money, the fans want to come and watch live cricket. Overall it seemed a good product.

"The timing suits broadcaster. It is good for the fans. Overall it is a win-win scenario. But it will cramp our schedule but I don't think many players will complain, we are used to it.

"If it becomes too busy, some players may opt out but as far as the other things are concerned, if it fills in all the gaps then I think it is a good venue and we would like to comeback and play cricket," he added.

Comments
Topics mentioned in this article
Cricket India Cricket Team MS Dhoni Virat Kohli West Indies vs India 2016
Get the latest updates on ICC Women's Cricket World Cup 2022 and IPL 2022, check out the Schedule , Live Score and IPL Points Table. Like us on Facebook or follow us on Twitter for more sports updates. You can also download the NDTV Cricket app for Android or iOS.