The match began late by 40 minutes due to technical reasons and later rain ruined India's chase when they were 15/0 in two overs, chasing 144 to win against the West Indies 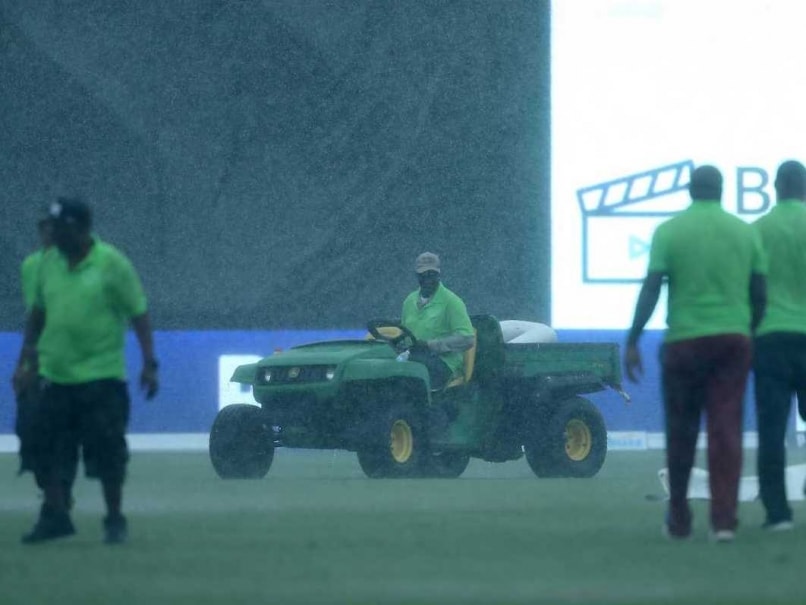 Absence of Super Sopper at the Central Broward Regional Park Stadium meant India vs West Indies match could not be re-started at cut-off time.Â © BCCI

In an anti-climactic finish to the second Twenty20 cricket International,rain and wet outfield denied India chance to level the series after dominating proceedings in the West Indies innings as the match was called off due to wet outfield on Sunday.Â

The match began late by 40 minutes due to technical reasons and later rain spoilt India's chase when they were 15 for none in two overs, chasing 144 to win.

Absence of Super Sopper at the Central Broward Regional Park Stadium meant that the game could not be re-started at cut-off time.

It was heartbreaking for India as their bowlers bowled with supreme control to bundle out West Indies for a mere 143 in 19.4 overs, leaving behind the bashing they had suffered in the opening match.

In the fourth Test at Port of Spain also, the rain and unplayable conditions had denied India the chace to retain their number on rank in Tests as the match ended in a draw.

Indian bowlers put up a collective effort in restricting the West Indies to a manageable total on a slow wicket that had nothing for the pacers.

Leg spinner Amit Mishra (3/24) provided the opening breakthrough by dismissing Johnson Charles (43) and R Ashwin then combined with paceman Jasprit Bumrah to tighten the noose around the West Indies with regular strikes.

Mishra, who replaced Stuart Binny, gave away only 24 runs, dismissed three batsmen and his bowling made a good impact along with Ashwin (2/11), who conceded very few runs in his three overs.

Bumrah (2/26) was consistent with his line and length while Mohammed Shami also chipped in with two scalps.

The Indian pace duo of Bhuvneshwar Kumar and Shami (2/31) initially bowled at a good length but were punished when they strayed as the pitch had nothing to offer for the pacers.

Charles hoicked Bhuvneshwar, who dug one short, for a massive six over mid-wicket to begin the fireworks even as Shami removed the first match centurion Evin Lewis (7).

An unfazed Charles though flicked Shami for another six with the strength of his wrist and followed it up with consecutive boundaries.

Charles had no problem whether he was facing a short ball or a length delivery. The strapping Windies batsman dispatched those balls to the boundary ropes with consummate ease.

Mishra struck with his first ball as he saw the back of Charles, who attempted a maximum but found Ajinkya Rahane at long on.

Mishra put the brakes on the scoring rate, giving away only four runs in that over. With spinners looking like making an impact, India captain Mahendra Singh Dhoni introduced left-armer Ravindra Jadeja, who bowled five dots and conceded only one run in the next over.

While the first five overs fetched West Indies 50 runs, India conceded only 26 in the next five, bowled by spinners, and also took two wickets. Ashwin foxed a charging Lendl Simmons (19) with a wide ball and had him stumped.

Jasprit Bumrah had Marlon Samuels (5) caught behind with his first ball while Ashwin had his second wicket when he trapped Kieron Pollard (13) in the next over.

West Indies were now struggling. Bumrah cleaned up Andre Fletcher (3) and Mishra returned to get the better of Dwayne Bravo (3) and the very dangerous Carlos Brathwaite (18).Â