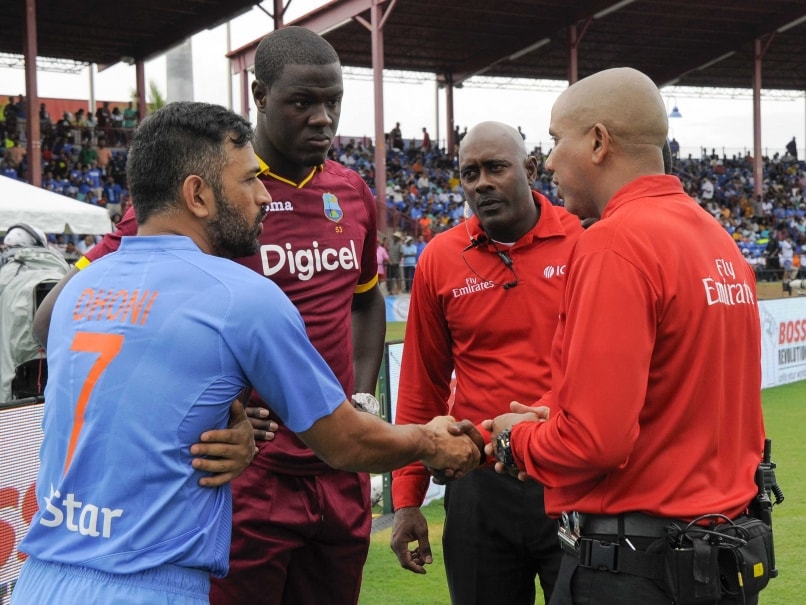 India captain Mahendra Singh Dhoni and West Indies skipper Carlos Brathwaite differed in their opinion about the quality of the ground at Central Broward Regional Park after the second T20 International was called off due to wet outfield here.

After dismissing West Indies for 143, India were 15 for no loss in two overs when a 15-minute thunderstorm left huge puddles on some section of the field, including the bowler's run-up at the pavilion end of the ground, forcing the officials to call off the match.

"So in my opinion it was unsafe, and even if the run-ups were good and a guy hits a ball in the outfield in a fast-paced T20 game and he chases behind it and pulls something, that could be the end of a guy's career.

"So not only will we want to play, we want the facilities and the atmosphere to be as safe for everyone's career as possible. In my opinion, I don't think it was and the umpires also made that decision as well."

However, Dhoni said he has played in worse conditions during his career, citing the example of 2011 tour of England.

"What the umpires told us, there was not adequate equipment over here and the condition of it was quite bad, so because the conditions wouldn't improve we won't be able to play a game," Dhoni said.

"That's a call that the match officials have to make and as far as I've played close to 10 years of international cricket and frankly I've played under worse off conditions.

"If I remember in 2011, the whole ODI series that we played in England, it was literally playing under the rain. I feel definitely the conditions ... ultimately the umpires decide so they decide you play, we play. If they say okay it was unfit for play, it was unfit for play.

"It was on this (west) side where me and Bravo were standing but it was far away from all the run-ups of the bowlers. There is no Shoaib Akhtar in their team so I don't think it was a big concern."

The second T20I also had a 40-minute delayed start in the morning and Brathwaite said: "We were always working against time especially with the 40-minute delay beforehand. It was always difficult to get the ground in readiness for the time that was told to be cut off, so that was a major problem.

"The equipment that obviously will be had in years to come, because of the fantastic infrastructure that's already in place, will then eliminate stuff like this from happening in the future."

The 28-year-old from Barbados, however, exuded optimism of returning to USA to play matches in future.

"The infrastructure, the facility, we came three or four days ago and there was nothing going up and today they are picking it back down," Brathwaite said.

"So they had stands built in no time, no injuries so obviously they were safe enough, and the outfield, barring the rain was perfect, lightning quick. The pitch was fantastic. It didn't change too much over the course of yesterday and today, that's 40, 62 overs odd, so that's the basis of something positive.

"Now just little tweaks and little stuff to go into the actual infrastructure continuing what is already there, I can see a big future ahead not only for India v West Indies in America but for American cricket itself.

"I personally see some 50-over games being played here as well. We'll probably get a team to break the 500-run barrier. So looking forward to it and yeah as I say, it bodes well for cricket in the United States. I love Fort Lauderdale and hope to be back soon," he said.

Comments
Topics mentioned in this article
MS Dhoni Carlos Brathwaite India Cricket Team West Indies Cricket Team West Indies vs India 2016 Cricket
Get the latest updates on IPL Auction 2023 and check out  IPL 2023 and Live Cricket Score. Like us on Facebook or follow us on Twitter for more sports updates. You can also download the NDTV Cricket app for Android or iOS.