KL Rahul ended at 110 not out off 51 balls. His 46-ball hundred was the joint second fastest T20I ton, levelled with South African Faf du Plessis and one ball more than Richard Levi of South Africa 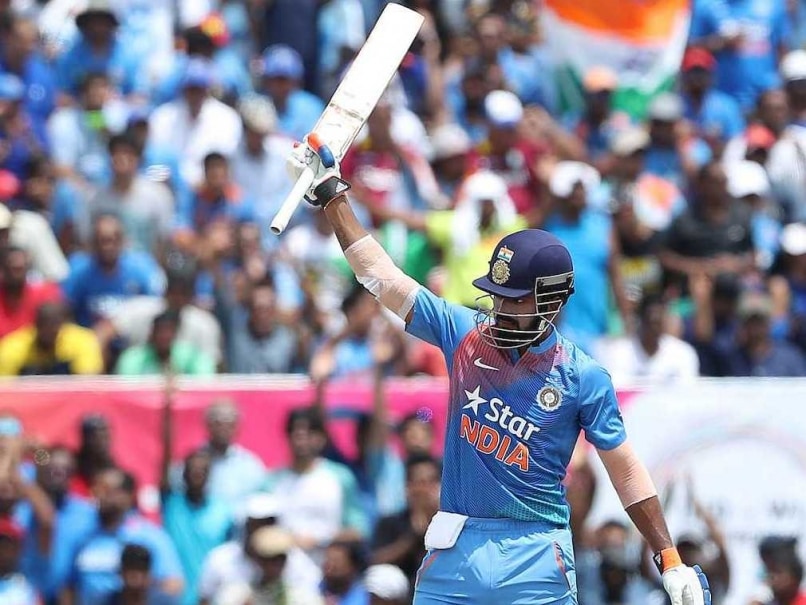 KL Rahul's century went in vain as India lost by one run to the West Indies.© BCCI

Team India skipper MS Dhoni was all praise for KL Rahul who struck his maiden T20I century in in the first match of the two-T20I series against the West Indies in Florida on Saturday.

Rahul ended at 110 not out off 51 balls. His 46-ball hundred was the joint second fastest T20I ton, levelled with South African Faf du Plessis and one ball more than Richard Levi of South Africa. Despite his knock, however, India succumbed to a one-run defeat to the West Indies on Saturday.

"Rahul has been very consistent. Wherever he has batted for India, including in Zimbabwe, he has done really well. The good thing is that he is among those openers who can play well against spinners.

"He (Rahul) is a compact player and at the same time can play unorthodox shots and he plays all over the ground, can hit over covers, over mid on and mid off. A complete cricketer and of course a long way to go for him. The way he was playing in last six months it was very encouraging to see him bat," Dhoni said.

Asked about the likely impact of the kind of dramatic finish in the T20I match, Dhoni said, "It is amazing for the spectators but tough for the bowlers and batsmen. But I think for spectators they just love the fact that so many boundaries got hit and so many sixes happened in the game. 30-40 sixes I don't know, it could be comparable to baseball. I don't know how many home runs you get there.

"There were a lot many sixes and it is not only straight sixes, bowlers got hit everywhere. It's good for spectators, especially Indian fans. They love sixes, boundaries and wickets. If you have a mixture of all and still if you can get a game as close as this one, they feel very satisfied and they feel OK, for every dollar spent they got the best out of it."

Comments
Topics mentioned in this article
Cricket India Cricket Team West Indies Cricket Team MS Dhoni Lokesh Rahul West Indies vs India 2016
Get the latest updates on IPL 2020, check out the IPL Schedule for 2020 and Indian Premier League (IPL) Cricket live score . Like us on Facebook or follow us on Twitter for more sports updates. You can also download the NDTV Cricket app for Android or iOS.