US Open: Isner tops Nieminen in 4 sets in 2nd round

John Isner overcame a rare tiebreaker loss to advance at the U.S. Open with a second straight four-set win. 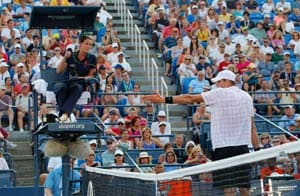 John Isner overcame a rare tiebreaker loss to advance at the U.S. Open with a second straight four-set win.

Isner was frustrated by a late let call he thought was incorrect that cost him a point while serving with a 5-4 lead in the second-set tiebreaker. Nieminen went on to win the last three points.

But Isner broke the 42nd-ranked Nieminen four times to reach the third round at the U.S. Open for the fourth straight year.

Comments
Topics mentioned in this article
Tennis John Isner US Open 2012 Jarkko Nieminen Leander Paes Maria Sharapova Sania Mirza Tiger Woods
Get the latest Cricket news, check out the India cricket schedule, Cricket live score . Like us on Facebook or follow us on Twitter for more sports updates. You can also download the NDTV Cricket app for Android or iOS.